Walmsley, the first runner ever to break six hours on the iconic route, took 26 minutes off the previous record 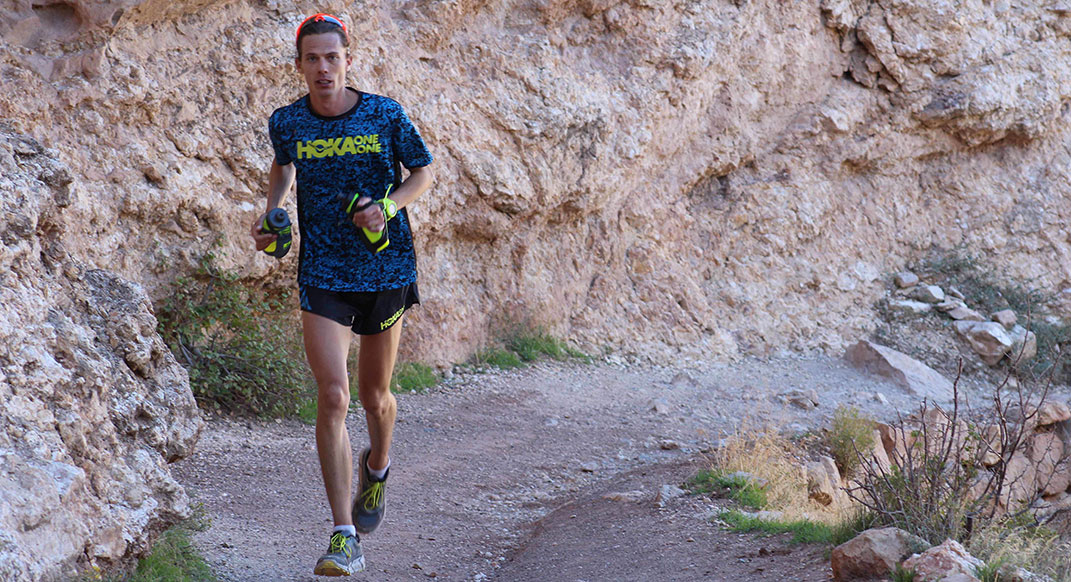 Jim Walmsley has run across the Grand Canyon and back faster than anyone else to date.

The 26-year-old Flagstaff, Arizona, resident set a new fastest known time (FKT) on the Canyon’s Rim-to-Rim-to-Rim (R2R2R) route earlier today, covering its 42 miles and 10,000-plus feet of vertical gain in 5:55:20, according to data from Walmsley’s GPS watch.

That time is 26 minutes 27 seconds faster than the previous FKT, set by his next-door neighbor, ultrarunner Rob Krar, in 2013. Krar’s record was itself a monumental achievement that took over 30 minutes off the existing FKT.

“Sorry Rob,” Walmsley joked with family and friends on the Canyon’s South Rim after the run. “I have the fastest time on the block now. Just saying.”

Walmsley left from the South Kaibab Trailhead on the Canyon’s South Rim just before 4:30 a.m. to avoid both the heat and the mule trains that are routine in the northern Arizona national park.

The route descends to the Colorado River—nearly a vertical mile down—before running through the Canyon’s corridor and making a slightly longer climb to the North Rim. That’s rim-to-rim; those running R2R2R then turn around and run back. Water is available at several spots along the way, and runners often complete the route unsupported.

Walmsley set a new FKT for the single crossing en route, hitting the North Rim in 2:46:08, according to Walmsley and a crewperson who aided him at the halfway point. (Krar had also held the single-direction record of 2:51:20, set in a single push in 2012.

The descent down South Kaibab is replete with mule steps and potholes, making for treacherous footing on an early-morning start.

“There are huge divots everywhere,” Walmsley says. “Running that trail in the dark is really sketchy. I practiced it once in the dark, hit the river in 42 minutes and knew I could break this record.”

Hikers weren’t much of an obstacle on the way back out. “I didn’t have trouble with traffic,” he says. “I think the people who saw me thought, ‘This guy looks like he’s gonna die—let’s get out of his way.’”

Walmsley had been doing plenty of recon on the route in the buildup to this FKT attempt, logging multiple runs down and up South Kaibab.

“I’ve been focusing a lot of my training on vertical feet climbed each week, with equal descent,” he said prior to the attempt. “The key will be to be able to withstand hammering the long, long descent of the Canyon, but have plenty left to run fast on the flats and the strength to climb out, twice.”

Walmsley also said some recent race finishes—including wins at the Franklin Mountains 50K and Stagecoach 55K earlier this month—gave him confidence that his fitness was ripe for a try at the double-crossing record.

“The timing and my fitness were too good not to try it,” he says. “The key was finding the time. After Western States”—where he led, ahead of course-record pace, before making a wrong turn late in the race—”race directors all over are asking me to run their races.

“But ever since I got into ultras and knew there were FKTs in the Canyon, that’s been a priority,” he continues.

Originally from Arizona, and now living nearby in Flagstaff, Walmsley says the Canyon is “home for me.”

“I want to write my part in the history books of the Grand Canyon,” he says. “It’s my backyard and a special place to anyone who has set their eyes on it.”