Jornet, Schlarb Call it a Draw at Hardrock, Becoming Co-Champions

After running nearly 100 miles together, the competitors decided to finish hand-in-hand 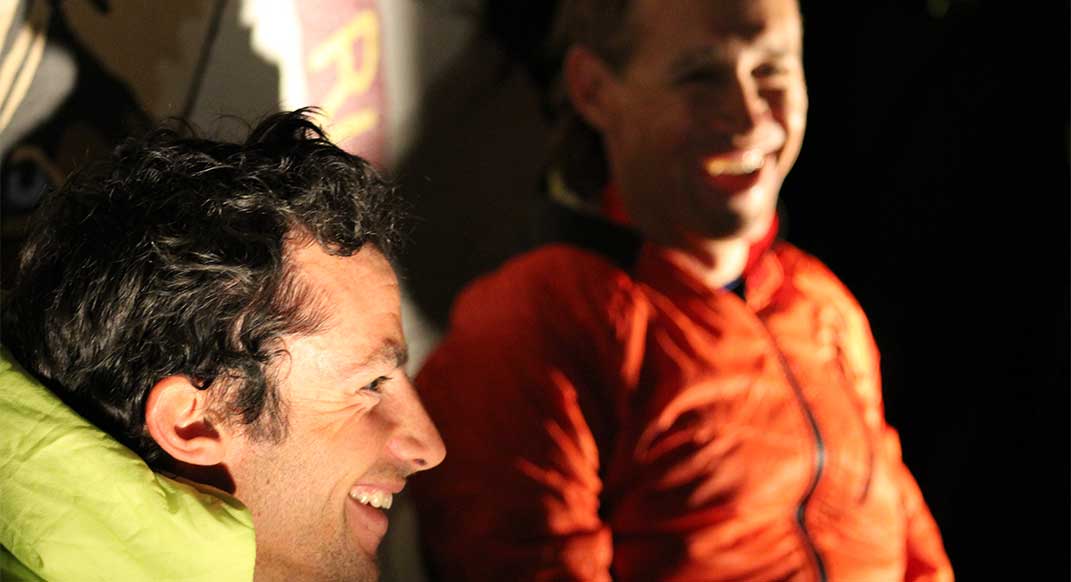 Kilian Jornet (left) and Jason Schlarb after finishing the Hardrock 100 together, in first. Photo by Alex Kurt

Before daybreak in Silverton, Colorado, today, Kilian Jornet and Jason Schlarb turned the last corner of the Hardrock 100 course, joined hands and simultaneously kissed the iconic painted rock that marks the finish line.

It was the first tie at Hardrock since 1997, when Mark Hartell and Mark McDermott finished together in 30 hours 33 minutes.

“Kilian decided not to run away from me at Cunningham Gulch,” said Schlarb, 38, of nearby Durango, Colorado, referring to the race’s final aid station, at mile 91.2. “It enabled me to have the best performance of my life.”

Schlarb referred to the race as “the best of my life” several times in the post-race interview at the finish line.

After initially running in the lead trio with Jornet and two-time Ultra-Trail du Mont-Blanc winner Xavier Thevenard, 28, of France, Schlarb fell behind in the race’s middle miles but caught Jornet after the halfway point. The two then separated themselves from Thevenard and ran the remaining miles of the famously difficult high-country course together, joined at times by their respective pacers.

Thevenard finished third in an unofficial time of 23 hours 57 minutes.

Schlarb said he considered Jornet the stronger runner, and had been thinking about whether they could finish together from early on.

He joked that mile 70 was too early to propose this, though.

“So I said, ‘Are you gonna go when [you pick up pacer/fiancé Emilie Forsberg]?’, and he asked [if I wanted to finish together], and I said it would be an honor if he would, um, wait for me,” Schlarb said to laughter from the gathered crowd.

“I think it’s logical because we were running together for the whole course,” Jornet added. “[You should] not to make a sprint to finish, like, one minute in front.”

Schlarb then inquired whether both he and Jornet would be given entries into next year’s race. The 152 entries to Hardrock (150 of which are distributed via lottery) are hard to come by, with only the previous year’s male and female winners guaranteed a spot.

“I think we can work something out,” said race director Dale Garland.

The Hardrock Endurance 100 Run is still underway and competitors have until 6 a.m. local time Sunday to arrive back in Silverton. As of this writing, Anna Frost led the women’s race with fewer than 10 miles to the finish.