The exact route is open and often off trail, requiring the need to navigate and take optimal lines with unstable footing and extreme exposure. 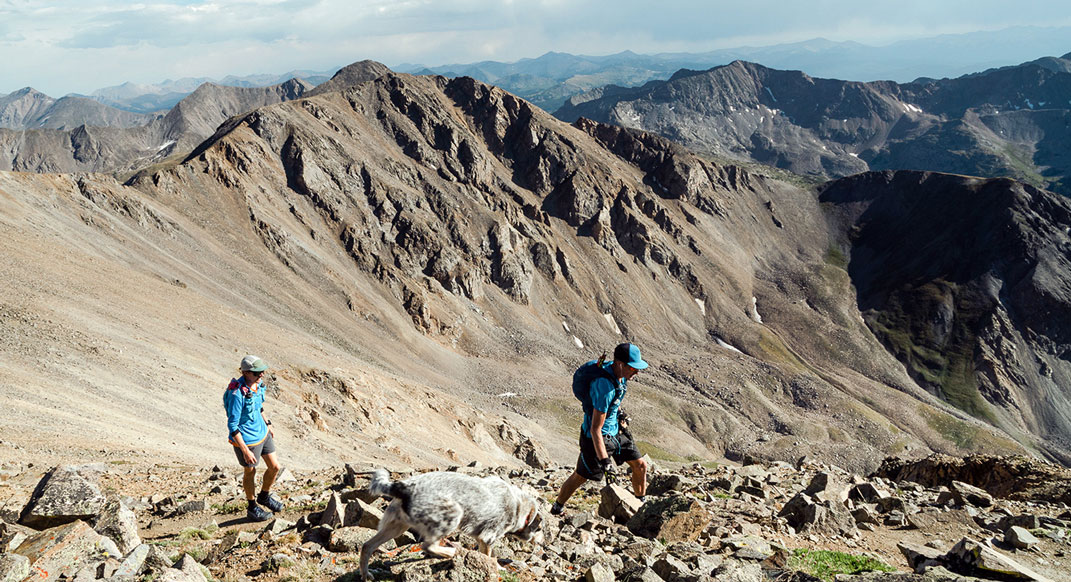 Heading toward the back side of La Plata Peak and into the darkness of the second night of his 100-plus-mile journey, he was already a little bit distraught and extremely fatigued. His wife, Kylee, and friends, Basit Mustafa and Jax Mariash, had helped rejuvenate him at a makeshift aid station at the former mining settlement of Winfield after a rough journey over Huron Peak, with among other things, a foot-long triple-bacon Subway sandwich.

But by the time he reached the rough talus near the top of La Plata Peak—the 12th of the 14 peaks on the northbound route—he was physically, mentally and emotionally fried.

The 33-year-old Dynafit-sponsored ultrarunner and retail store manager from Carbondale, Colorado, had already encountered lightning storms, icy graupel pellets the size of quarters falling from the sky, slippery scree fields and a few bouts of self-doubt since he started from the south end of the Nolan’s route at 5 p.m. on Thursday, July 30. But now, in the wee hours of Saturday morning, things were starting to get really ugly. Van Horn was understandably concerned about the threatening weather, getting lost and questioning whether he could continue on and finish.

Van Horn had already encountered lightning storms, icy graupel pellets the size of quarters falling from the sky, slippery scree fields and a few bouts of self-doubt since he started from the south end of the Nolan’s route at 5 p.m. on Thursday, July 30. But now, in the wee hours of Saturday morning, things were starting to get really ugly.

Having dealt with depression, addiction, eating disorders and other mental health issues since he was a teen, not to mention serious back problems and other physical issues, Van Horn has tread along the razor’s edge many times in his endurance-sports career and in life.

Alone and in the dark of night, things began to blur. Some of his thoughts were rational, some were not. With 25 miles and Colorado’s two tallest mountains remaining in front of him—4,433-foot Mt. Elbert and 14,421-foot Mt. Massive—he was spiraling into self-loathing and despair.

“My body and brain were just revolting and I just didn’t want to go forward,” he said. “My legs were dead and that ultra-fatigue was setting in and I no idea if I could keep going. It was cold and I was just whining to myself in my head and I stumbled my way to the top. I was just mentally coming unglued. I was really wrestling with those demons and contemplating pulling out and calling it quits the whole way down.” 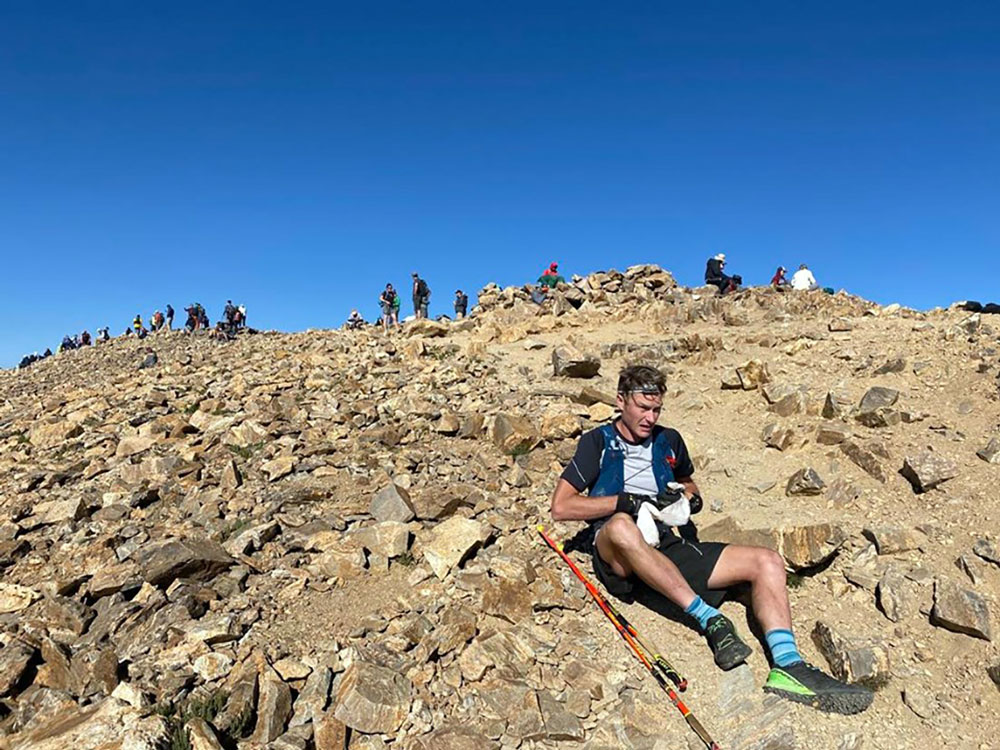 At 100-plus miles and roughly 40,000 feet of elevation gain, Nolan’s 14 is one of the hardest mountain projects in the world. The exact route is open and often off trail, requiring the need to navigate and take optimal lines with unstable footing and extreme exposure. But for most, it’s as much as a mental and emotional grind as it is physical. That was especially true for Van Horn.

From the start, he had intended to follow the splits of Alex Nichols, the Colorado Springs runner who set the supported northbound FKT of 46 hours 41 minutes on the route in 2018. Despite feeling horrible and slowing down, Van Horn was still within 30 minutes of that pace as he made his way down the front side of La Plata to another makeshift crew point Kylee and friends had set up along Highway 82 near the eastern flanks of Independence Pass.

Oddly, it was the closest point of the course to his home in Carbondale, so if he wanted to quit, he could have just announced he was done, and after an hour drive over the pass, he could have fallen asleep in the comfort of his own bed.

But that’s not what happened.

Instead, he immediately crawled into the back seat of his Toyota Tacoma and tried to take a nap. But the moment he closed his eyes, reality set in. And so did a certain inner tenacity he’d honing for years while managing the stability of his own mental health.

“As soon as I closed my eyes, I knew I wasn’t going to sleep and I knew my legs were going to be wrecked the rest of the summer anyway,” he said. “I told myself I had already completed 75 or so miles and a lot of vert, so I might as well keep trudging on and try to finish it. So I got out of the truck and, with the support of my wife and jokes from Basit, I ate some food and was determined to keep going.”

Formerly a competitive cyclist and triathlete, Van Horn was troubled by back pain for years that kept him from being as consistent or successful as he might have been given the amount of work and passion he sunk into his training. After several misdiagnoses, he finally found out that he had a herniated disc.

He underwent a microdiscectomy and a follow-up surgery, but has still dealt with numerous physical challenges and injuries that led to frustration, disappointment and even bouts of depression.

In 2012, he underwent a microdiscectomy and a follow-up surgery, but has still dealt with numerous physical challenges and injuries that led to frustration, disappointment and even bouts of depression. For a long time, most long runs would lead to back spasms and require massage therapy, chiropractic treatments or long periods without running.

Amid his success as an ultrarunner—he has numerous top-10 finishes to show for it—he has continually battled structural issues and the mental anguish that often came with it. Meeting and marrying Kylee has helped provide balance and stability, he says, certainly more so than the endless hours of asymmetrical strength exercises he’s worked at relentlessly for years.

“Not that I have this figured out by any means, but running and exercise can be a useful tool to deal with difficult situations and mental-health disorders, but I also know that it probably shouldn’t be the only tool you’re using,” he said. “You have to heal the rest of yourself, too. Making sure you’re working on the whole person makes a big difference and then I think that can translate into success in ultras.

“Having those demons and deep angst inside of you can help you push through the lows and pain that maybe other individuals can’t. But it can also come back to bite you in the ass if you get to a low point and can’t manage it.”

Having those demons and deep angst inside of you can help you push through the lows and pain that maybe other individuals can’t. But it can also come back to bite you in the ass if you get to a low point and can’t manage it.

Van Horn is quick to recognize the adage that it also takes a village and he couldn’t gotten even part of the way through it without Kylee and the numerous friends who paced and supported him, as well as many others who supported him from afar.

Although his legs were trashed as set out toward Elbert, he got an energetic boost from the company of friends Kyle Young and Cam Smith, who would join him for the final 25 or so miles over Mt. Elbert and Mt. Massive. Surprisingly, as it often happens in ultras, the sun came up on Saturday morning and his legs magically came back to life.

It wasn’t a walk in the park though. He continued battling through more highs lows, but never gave up. After struggling his way up Mt. Massive, he found his way to the imaginary finish line at the Leadville National Fish Hatchery after a grueling  45 hours 57 minutes on the course.

That eclipsed Nichols’ supported time by about 44 minutes and stands as the second-fastest time ever recorded on the route, only trailing Joey Campanelli’s mind-boggling northbound unsupported mark of 41 hours 33 seconds set in early July 2020.

Moments after he finished, Van Horn popped a bottle of champagne, high-fived and hugged his wife, pacers and friends and proceeded to lie down under a blanket. He had left everything out on the course and was grateful to be done.

While Mustafa and pacer Andrew Letherby acknowledged his training, fitness smarts and grit, Kylee, who was his reliable crew chief, made note of his joy of running and passion for the mountains.

“It’s hard to find the words to express how I feel about this accomplishment,” Kylee Van Horn says. “Sean has an appreciation for the mountains more than most anyone I know. He thrives off of long days, big peaks and enduring a lot of pain. I’m honored to have been able to share many a day out there with him and this Nolan’s journey was no exception. Thank you for inspiring us all. And I will always be forever grateful to have a partner that never takes a single day of life for granted.”