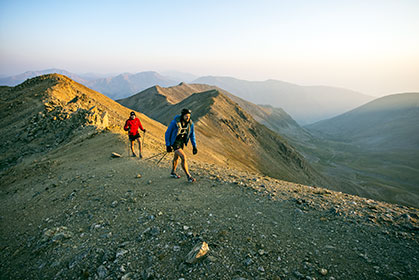 Jared Campbell leads Matt Hart along the summit ridge of Missouri Mountain (peak #5 of 14) at dawn on day two. Photo by Fred Marmsater.

The wind was calm, but my mind was not. As my running partner Jared Campbell, 33, of Salt Lake City, Utah, and I climbed the trail to the 14,337-foot summit of La Plata Peak, my body was already breaking down—and our ambitious adventure had hardly begun.

We were just three peaks into our attempt to run the “Nolan’s 14,”  a route that summits 14 14,000-foot peaks in Colorado’s Sawatch Range. With over 45,000 feet of elevation gain and only a smattering of established trails, the route mostly consists of strenuous bushwhacking.

The idea for Nolan’s 14 was hatched in 1991 when ultrarunner Fred Vance of Pleasanton, California, asked mountaineer Jim Nolan to devise a route that summited as many 14ers as possible in 100 miles. Nolan had climbed all of Colorado’s 54 peaks over 14,000 feet. Though it took him only a week to devise the route, it wasn’t until 1999 that anyone attempted it, and 2001 until anyone completed it. That year, four out of 11 starters—Mike Tilden, Blake Wood, John Robinson and Jim Nelson—managed to summit all 14 peaks within the allocated 60-hour cutoff of the loosely organized event. The following year, Robinson, an ultrarunner from Oregon, became the only person to finish the route twice, also claiming the fastest known time (FKT) of 54 hours 57 minutes. Then, in 2003, the U.S. Forest Service closed down the event. Still, a handful of hardy individuals attempt the route “unofficially” every year.

In training with Jared throughout our home state of Utah, I had grown accustomed to him climbing faster than me, navigating rugged terrain with the ease of a  mountain goat. As I  watched him bound  up the trail toward  the summit of La Plata, it wasn’t that I doubted my ability to continue so much as I feared his disappointment if I ruined this adventure.

Jared has accomplished a few of the almost impossible challenges in ultra/adventure running, including finishing Tennessee’s Barkley Marathons (the 11th person ever to do so) and winning the high-altitude Hardrock 100-Mile Endurance Run in Silverton, Colorado. We had met six years prior at a party of mutual runner types. Many years and adventures later, we landed on the idea of attempting to run Nolan’s together in less than 60 hours.

Now just 10 hours into our adventure, I felt dizzy, weakened by altitude sickness that had caused me to stop eating miles before. Jared would pull ahead of me for 30 minutes at a time, then wait for me with a smile. At La Plata’s 14,337- foot summit, I said, “This is ridiculous. I gotta cut you loose. You can do something special on this route.” 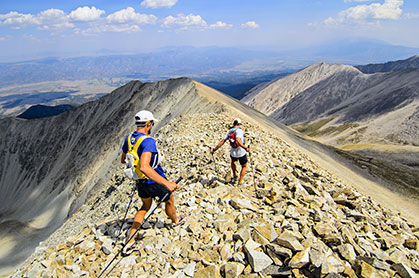 A rugged descent off Mount Antero (#12) on day three. Photo by Fred Marmsater.

“Don’t even entertain those thoughts,” said Jared. As we ran down the rocky southern ridge of La Plata into the basin below, severe winds hammered our faces, but I savored the descent—more skiing than running, as we rode out each footfall’s mini avalanche of scree.

Jared’s wife, Mindy, met us at the dusty ghost town of Winfield. I overheard him tell her, “Matt’s not himself.” I wanted to say, “This is me, man. I suck at altitude, and I am weak.” Like a petulant girlfriend, what I really wanted was for Jared to tell me he was committed—committed to completing the route with me. When we stood up, he gave me a hug, then took me by the shoulders, looked me in the eyes and said, “We’re doing this together, Matt.”

Though night had fallen, I shook off my self-doubt and climbed 14,003-foot Huron Peak with newfound energy. The trail only went up the mountain’s west side to the summit, so from the saddle we forged our own way down a steep east-side talus field. Huge unsettled boulders shifted under our feet as we chose our lines through them like downhill mountain bikers. One of my trekking poles got stuck in the rocks and snapped. Better the pole than my leg, I thought.

The relief of being off the rocks was short lived. We scrambled down to Clohesy Lake, a descent so steep we had to grab trees to brake against gravity’s pull. We moved gracefully at first, two experienced bushwhackers flying downhill through the nasty overgrowth. Maybe enjoying the free speed a bit too much, we both took hard falls—the kind that left us lying on the ground, scraped and bloodied, but grateful to be in one piece.

The sun rose as we summited Mount Belford (14,205 feet)—and with it, my spirits rose, too. The next three peaks were connected by a treeless, rocky ridge. Vegetation knew better than to grow there; it’s equally inhospitable to humans, but seemed like a fair trade for not having to descend to the valley floor and climb thousands of feet between summits. The cost of this gift, however, was that we battled 12,000-plus-foot altitude for over six hours straight. Jared’s pace slowed in response. 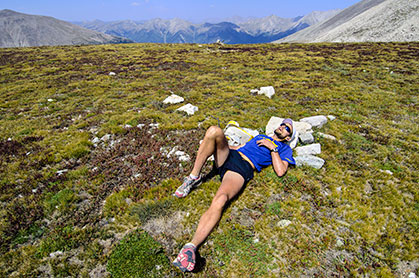 Campbell rests between summits, after throwing up. Photo by Fred Marmsater.

By the time we made it up Harvard, we were running about three hours behind schedule and missed our planned rendezvous with Mindy on the North Cottonwood Trail. Knowing we had no chance of continuing without a resupply, we hammered down the trail toward the parking  lot, adding miles to our planned route. When we arrived, Mindy was still there, packing the car. Jared and I exchanged a quiet, satisfied glance.

After a 13-mile trot along the Colorado Trail, we headed off-trail once again up Mount Princeton. A pattern had  emerged: whenever we ascended above 12,500  feet, Jared would violently vomit and curl into  the fetal position, eyes glazed, for 30 seconds  before proceeding. Between thoughts of how  I might have to save Jared if he slipped into unconsciousness, I ran numbers in my head and knew we would be cutting it close to finish in less than 60 hours.

By the time we summited Princeton, I was elated that Jared seemed rejuvenated. “This ridge is amazing,” he said, reminding me to look around. Above tree line, jagged mountains surrounded us … we were completely alone.

After about 56 hours we climbed a steep gully to the saddle between Tabeguache Peak and Mount Shavano, summits 13 and 14. Now unable to eat at all, Jared was rapidly deteriorating. As we approached the saddle, he veered off course, climbing the opposing ridge for no apparent reason. Then he lay down.

The longer an ultra-distance endeavor goes, the more you’re stripped of pretense. Emotions become raw and self-criticism is easy in these situations. In light of Jared’s condition it seemed selfish to be so preoccupied with the goal of finishing, but I felt helpless. From the outside, I watched him rile around in the same pain cave I’d been trapped in on La Plata.

It was here that I came to terms with the possibility of not finishing. Even though I could see both of the final summits, and we had what seemed like just enough time, it didn’t matter anymore. What mattered then was helping Jared. I offered him a gel, which he took and promptly threw up—but doing so gave him enough adrenaline to move again.

Now, I was the committed one. We’d do this together … or not at all.

Visit mattmahoney.net/nolans14 for details on the Nolan’s 14 route and documented finishers.