In her debut 100, Gallagher almost set the Leadville 100 course record. How did she do it? 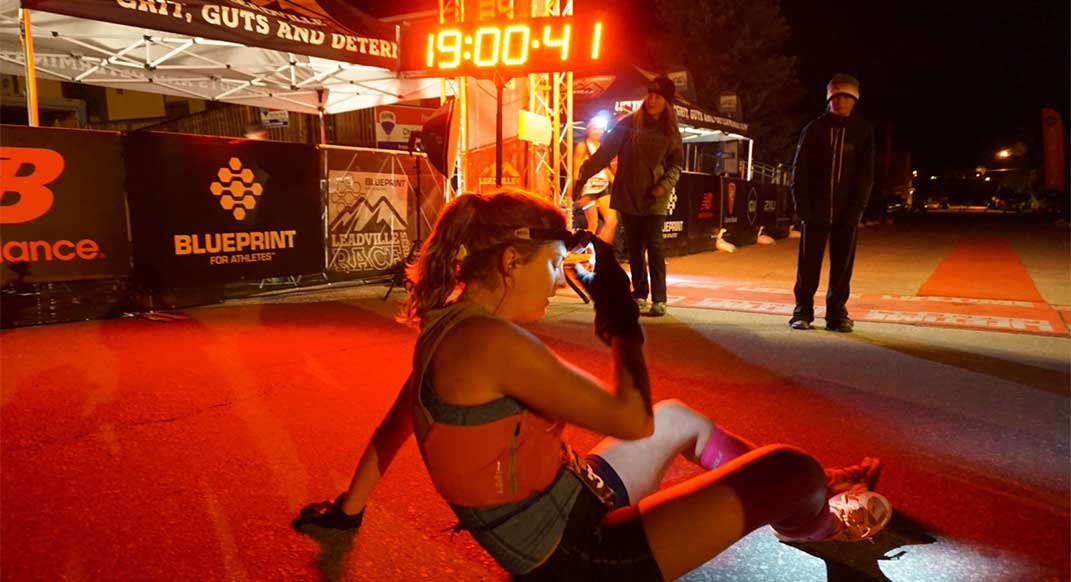 Clare Gallagher's 19:00:27 at Leadville on Saturday was good for the win and the second-fastest female time in race history. Photo by Ryan Lassen

In her first 100-miler, at just 24 years old, Clare Gallagher ran the second-fastest women’s time ever at the Leadville Trail 100, arguably among the most storied trail races in the world.

Who do you picture having that type of accomplishment? In my head, I’d picture a talented runner at shorter distances (check) with an intense drive (check) mixed with a results-oriented, ego-driven approach to trail running (wrong).

And that last guess isn’t just wrong, it’s “the Earth is flat” wrong. “My main goal was to remember not to take myself too seriously,” Clare says. “I wanted to try to smile the whole time.”

Clare ran at Princeton, graduating in 2014 after a career plagued by injuries. She ran impressive times, including a 17:34 5K, but felt she never lived up to her potential. In the process, she lost some of her love for running.

Immediately after graduating, she moved to Thailand for a year-long teaching fellowship. It was monsoon season, and the rain made it difficult to run. Beset by disillusionment with track and lacking motivation to train, she made an impulsive decision. She signed up for an 80K trail race in the mountains of northern Thailand in October 2014.

The area she taught in was flat as a pancake, so Clare got resourceful. “I trained on the beaches in Thailand and ran up the tsunami-evacuation towers,” she says. “I did tsunami-tower stairs constantly for four months straight.”

During that first ultra race, Clare knew she had found her running passion again. “I immediately fell in love with the trail-running community. Everyone is supportive and uplifting,” she says. “Also, it is fun to eat during races. I probably had five pounds of rice balls in the first 25 miles.”

When I spoke to her this week, it took a few prodding questions, and several laughs and attempts at changing the subject on her part, before I finally found out that she won her first ultra. It didn’t seem like false modesty—I just got the feeling that results weren’t all that important to her.

Nicklaus Combs, a friend who has witnessed Clare’s quick rise on the trails, echoes that sentiment. “You only need to spend a few minutes around Clare to understand why people gravitate towards her,” he says. “On the surface, her care-free, laid-back attitude—about running, racing and life—sets the tone.”

Still, he adds, “Underneath is an extremely focused athlete who sets goals and achieves them.”

Between October 2014 and January 2016, Clare bounced back and forth between teaching English in Thailand and spending time on the trails in her home state of Colorado. As she finished her fellowship and began to put down roots in the state, she became immersed in the Boulder trail-running community.

The Boulder trail community is a gateway drug for all types of endurance adventures, from rock climbing to winter sports. For Clare, it was ski mountaineering. This past winter, she skied up and down mountains with her friends and father, also an avid endurance athlete.

After a winter of sparse running mileage, but lots of aerobic work on skis, she signed up for the Austin Rattler 66K, held in Texas in April, with the sole goal of qualifying for Leadville (the Rattler awards Leadville entries to its age-group winners).

However, at mile 26, she ran into a major problem: Her stomach turned.

Clare, who has celiac disease, suspects contaminated polenta from the night before. She battled waves of nausea, ducking off into the bushes over and over as her body reacted.

She gritted out an agonizing finish, slowing from eight-minute miles to 17-minute miles, and from leading the race to placing eighth. Though if you look back at the photos from that race, you’ll see something that describes Clare better than a magazine profile ever could—despite the stomach distress and the disappointing finish, she never stopped smiling.

Clare laughs as she describes the death march, adding, “It was fortuitous, though, because all of the women ahead of me forfeited their [Leadville] spot.”

With her ticket to Leadville punched, she knew she was aerobically fit, and had four months to train for her biggest adventure yet.

“I totally coach myself, for better or worse,” she says. “I am pretty unstructured with training. My main decision is, ‘Am I playing in the mountains or doing workouts?’”

Clare built up her mileage, focusing on “not getting too wrapped up in any one thing.” (Amanda Basham, a friend and Leadville pacer, described this as purposeful training balanced with a “care-free optimism.”) She kept up her speed with faster road runs and built her strength with group trail runs in the mountains. Her peak weeks hit 95 miles as she readied her body for Leadville.

Clare started putting the training to the test. At the Dirty 30 50K in Black Hawk, Colorado, in May, she finished second to Alicia Shay (herself one of the best trail runners in the world). At the US 30K Championships in Colorado Springs in July, she finished second to Megan Roche (a four-time member of Team USA). Just a week later, she won the Aspen Power of Four 25K on a brutal course at the tail end of her hardest training week.

Clare toed the line at Leadville fitter than she had been in her entire life. The Boulder trail community expected incredible things, but outside of that bubble she was still relatively unknown.

She relished the big opportunity: “There is something to be said for running naïve, with dimmed lights on you.”

When the gun sounded, Clare took off and never looked back—metaphorically speaking, at least. In reality, she found herself looking in every direction, taking in views of the surrounding mountains (or, as she puts it, “earth raging”).

The mindset was different than it was in the shorter races. “One hundred miles is just so bizarre,” she says. “I can’t freak out because I have a whole day to do this thing.”

She kept reminding herself, At the end of the day, it’s a privilege to do this. “I thought about that a lot alone on the trails in the quiet spots,” she says. “I get to go run 100 miles and spend a lot of time with the best friends and family. And the ultra community is so beautiful, too.”

As she neared halfway, Clare had built a solid gap and was on course-record pace. Then, on the dreaded steep descent off 12,500-foot Hope Pass, she hit a low point. She was going downhill and moving slowly, with seemingly nothing left in her legs. “I thought, ‘This is what happens when people blow up.’”

At mile 50, sore but smiling, Clare met her salvation. She picked up her first pacer, her good friend Cat Bradley.

“It was like we were on an everyday run on our home trails,” Cat says. “She’s a fierce and focused competitor, but you’d never know it by watching her play on the trails.”

“The last 50 miles were downright cushy,” Clare says. “I got to run in beautiful places with awesome people and eat lots of candy.”

Between fistfuls of Reese’s and Snickers, Clare continued at course-record pace, threatening a historic mark—18:06:24, set by Ann Trason in 1994—and moving up through the men’s field in the process. At mile 74, she was 50 minutes ahead of her nearest competitor and feeling good. (“Except for a quick cry in a cow-patty field, it was really fun,” she says.)

Clare’s laid-back approach paid off. While there were some low points, and she fell off course-record pace, she fought to the finish in 19:00:27, two hours ahead of second-place woman Maggie Walsh, less than 30 minutes away from crashing the men’s podium and with the second-fastest women’s time in the history of the race.

With such a stunning performance, Clare will have lots of options to move forward with her running career. When I asked her about her long-term goals—winning Western States? signing a big shoe contract?—her answer was what you might expect.

“Keep smiling,” she said. “And have lots of adventures!”