At 45 years old, and with two kids and a full-time job, she continues to win ultras. 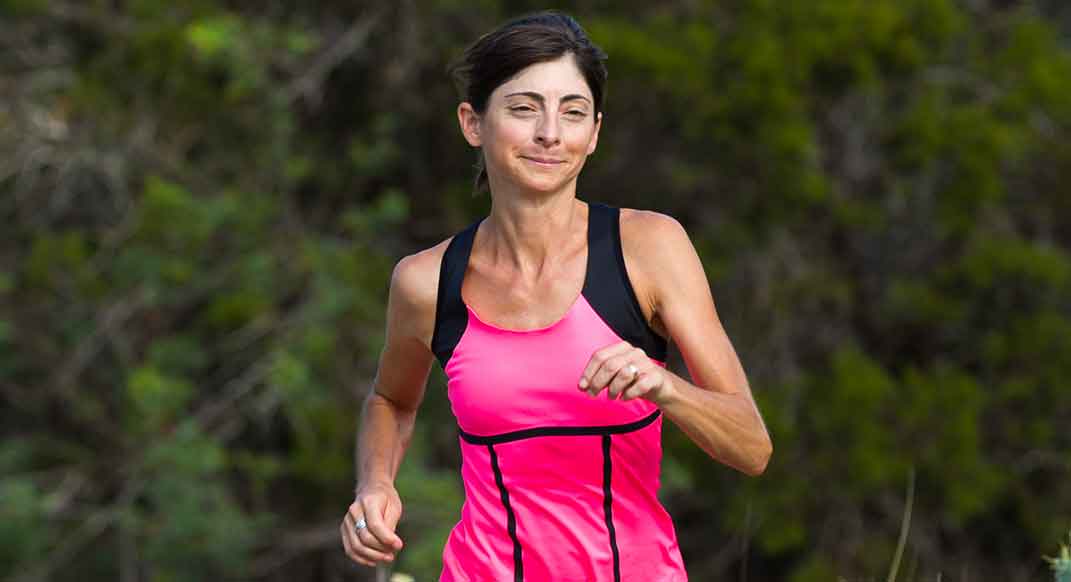 Liza Howard believes in mantras. During the recent USATF 50-Mile Championship race, as she was picking people off, she cheerfully shouted, “Make way for the old runners!”

Then, a while later, she talked to her cramping calf. “Come on, buddy. I know we can do this.”

Then, “I don’t want to be passed one mile from the finish.”

And finally, “Please don’t let me get passed within sight of the finish line.”

The mantras seem to be working for her. At 45, she’s led in nearly every ultra she’s entered since the start of her competitive trail-running career, only seven years ago. She’s won the Umstead 100, Rocky Raccoon 100 (twice), Cactus Rose 100, Javelina Jundred 100 and the Leadville 100 (twice).

On October 8, 2017, Howard won the USATF 50-Mile Road Championship at the Tussey Mountainback 50 in Pennsylvania.

Howard didn’t grow up running. Her father was in the army and she was raised in what was then West Berlin. Her high school didn’t have a track or cross-country team, so the closest Howard came to running in her early years was sitting on her father’s sweaty shoes so he could do sit ups after a run.

“I was a thin, unfit person,” says Howard.

She decided to train for her first road marathon in the late nineties. It was a whim, but she took to it immediately. “I loved running from the get go,” she says. “It made me happy.”

She dabbled in road running for nearly a decade before being introduced to the trail-running community. “And then,” she says, “You know, it’s a slippery slope.”

When she moved to San Antonio in 2005, she became friends with people in the ultrarunning community, and joined one friend for a long run in the Grand Canyon.

“My friends were setting big goals for themselves. So I did too,” she says.

In 2008, at the age of 38, she went for her first ultra, the Zane Grey 50K, and finished third. That same year she finished third in the Sunmart Texas Trails 50 Miler.

Her success came as a surprise. “It was like randomly trying jai alai and finding out I was a solid jai alai player,” she says. “Who knew?”

Not all of Howard’s races have been wildly successful. In 2013, running the Bandera 100K, she writes in her blog that she spent most of the race “heaving behind a sotol cactus … lying flat on my back … while the rest of the women’s field ran by.”

The following year, she had her second child. Two months later, she ran Bandera again, where she stopped to nurse twice, took a nap and still managed to place second. That same year, she set a 15:07 PR at the Umstead 100 Miler, which remains one of the fastest 100-mile times run by a female. She was still nursing.

Prior to kids and professional running, Howard’s life was full as a wilderness-medicine educator and instructor for the National Outdoor Leadership School.

Now she does it all. In addition to being an instructor, professional athlete and mom, she is an online running coach and hosts trail-running camps for veterans and Gold Star families.

Training as a fully employed mom involves a lot of compromise and treadmill miles. Howard once logged a 40-mile treadmill run while training for the Umstead 100.

“I’ve slowly let more and more things go, like cleaning the house or personal grooming,” she says. “Like most working moms, I wish I could run more with friends or train more, but most days I feel pretty peaceful about those limitations.”

Related: From the Treadmill to the Western States 100

This year, though, she decided she had finally had enough of the treadmill. “I think there are only so many treadmill miles in a life,” she says. “I’m done with it.”

She decided to make peace with trying her hardest on the trails and accepting whatever results came her way.

“The biggest thing to know about starting to run when you’re older is recovery time and progression to high miles can be slower,” she says. “Make peace with your circumstances and excel within them.”

Howard’s biggest concern leading into the USATF 50-mile Championships was her asthma. She developed asthma in 2013, and slowly, since then, her symptoms have gotten worse. Last year at Virginia’s JFK 50, she wound up lying on the side of the road under a pile of leaves, out of breath and exhausted. She began working with a pulmonologist and asthma specialist, yet she still has symptoms.

“I’ve had a string of horrible races,” she says. “I’ve been working really hard to figure out the right combo of meds, when to take my inhaler and when to buckle down on training.”

Come race day, though, she was pleasantly surprised to find herself running “at a pretty good clip” without any breathing trouble.

She averaged 8:10 miles until mile 20, where a hill slowed her down. She gained the lead at mile 36 and by mile 40, second place was 10 minutes behind.

At the mile-45 aid station, Howard’s calf cramp was at its worst. She didn’t have any electrolyte supplements, so she took a large sodium chloride pill from the aid station. About 200 yards later, she felt it coming back up and “erupted right in front of this kid. He got up and ran away.”

Feeling slightly better, she gutted it out to the finish line, coming in 7 hours 7 minutes and 48 seconds.

Howard used to dislike the fact that the USATF bibs display runners’ ages. Now, she wears her bib with pride.