Trail runner and olympian Deena Kastor on what she’s learned in her long career. 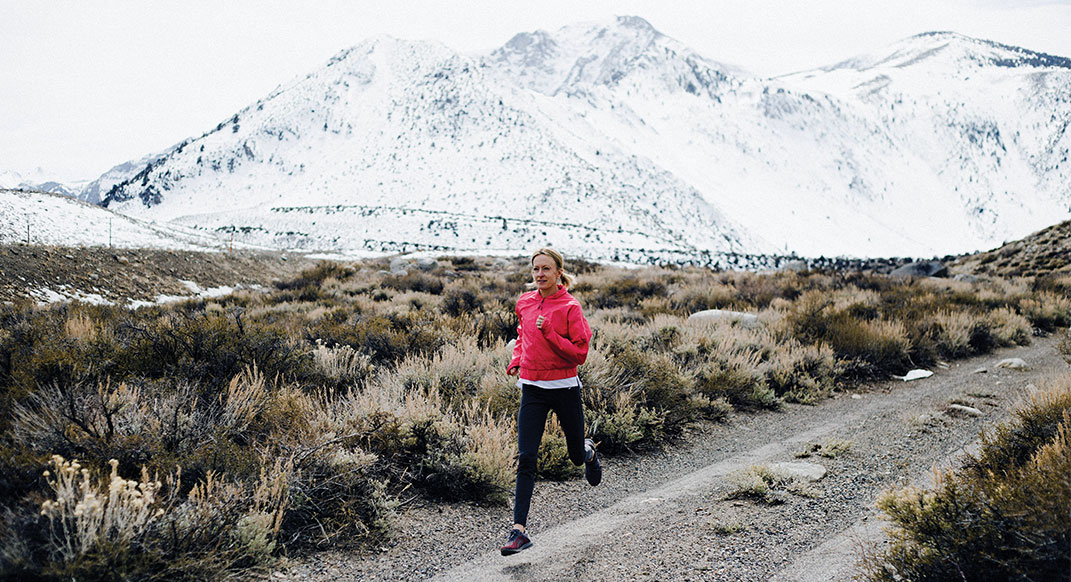 “When I first became a professional runner, I thought the hardest part would be the physical training. After all, what could be tougher than running to the top of an 11,000-foot peak while trying to fend off a pack of highly trained male distance runners? What could be more taxing than interval workouts so intense you taste blood in the back of your throat? The answer quickly became clear: wrestling with my mind.”—Let Your Mind Run: A Memoir of Thinking My Way to Victory

Most recognize Deena Kastor’s name as one of the best American female road runners in history. Kastor, 45, is the American record holder in the marathon. At one point, she held records in every distance from the 5K to the marathon. She is a three-time Olympian (earning bronze in 2004) and eight-time NCAA All-American.

Kastor has just released a new book, Let Your Mind Run (Penguin Random House, April 2018), a memoir that dives into the lessons she’s learned throughout her life and running career (which started at age 11) about the importance of mindset, gratitude and how, ultimately, attitude really is everything. Living in Mammoth Lakes, California, Kastor does the majority of her training out her backdoor, in the mountains at 8,050 feet. “I love being on the trails—it’s my happy place,” she says.

Trail Runner found Kastor at home on a rare break to learn more about her vision for the book and what she’s training for next.

How did you know there was more to success than just natural talent?
Being dubbed “talented” at a young age was a curse because it seemed like a natural gift rather than something I could strive for. I thought if you flexed your talent and if you had more than other people, you won; if you had less, you lost. Eventually, I wanted to quit because I had been doing it my entire life and I didn’t even understand my relationship to it.

Who was influential in your understanding of mindset training?
After graduation [from University of Arkansas], my assistant coach, Milan Donley, asked me if I’d given running everything I had. My immediate answer was yes, but then I had to think about it. I realized there was so much more to learn. It wasn’t about just running hard, it was about my relationship to it and to myself. [Donley then gave Deena the phone number for Coach Joe Vigil, retired from Adams State University in Colorado.] After talking with Coach Vigil, I was cracked open. He talked of the power of positivity, lifestyle choices and training cycles, and I realized there was more to learn about running before stepping away.

What was the first step?
I started paying attention and believing in what I was doing, and I was able to push through to the next layer. Mindfulness and gratitude helped me to change the tone in my thoughts. It worked all the time, not just sometimes.

How do you use this strength to compete?
In a race, it’s easy to settle where you are and compromise what you were going after. This is where you can throw in the towel or you can drop the hammer. I actually believe [winning] doesn’t really matter, but I want to grab meaning out of the race. The choices I make about myself and with my character are what matter. Sometimes I’ll just focus on one mile, then half a mile, then one step, then just continue with one foot in front of the other.

You’ve been training your mind for a long time. What has the evolution been like?
It’s been a lifelong commitment, like I still get pissed off in traffic, but I’ll imbue it with positive thoughts or other ways of thinking. I know our minds are malleable and I know our minds can be reconditioned. When the shit hits the fan, I have it at the ready.The transition time is much faster now, whether I’m stubbing my toe or late to pick up my daughter at school … I’ll ask myself, “What is this moment really about?” Many times, it’s rooted in how much I expect of myself so I have to ask myself, “What does that disappointment really mean?”

What’s your training like now?
I’m training for Boston [at time of publication] so I’m at a heavy point—110-to-120-mile weeks. I do three quality workouts: one on speed, one on a long run and one on a short run. I keep my patience and breathe deeply when I’m tired. Even though I’m training for Boston, I train in the mountains and end the run with hitting the pavement.

When you coach other runners, what do you prioritize?
You are capable. You’ve done this before and you’ve gotten through it so find a way. Sometimes we take things just too seriously. Lighten up and find a way to get through it.