Just another weekend for this extremely prolific athlete 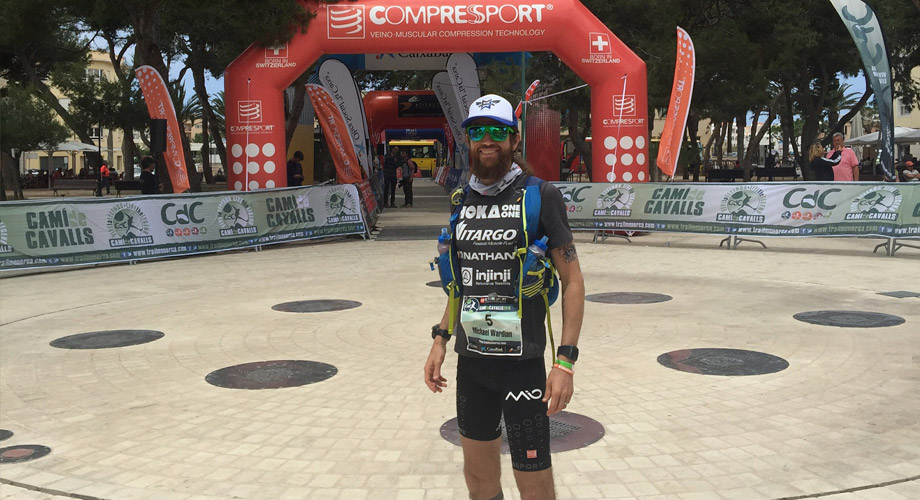 At 6 a.m. Friday, Michael Wardian started the San Diego 100, a 100-mile race in the Laguna Mountains outside the Southern California city.

At 3:33 a.m. Saturday, about 21 hours 30 minutes later, he finished—fourth place. He hung out to take pictures and cheer on other finishers, then went sight seeing and got a massage (while simultaneously learning about “the art of surfing” from the masseur). He went to bed around 11 p.m. that night.

Then he woke up at 3:45 yesterday morning, started the San Diego Rock ‘n’ Roll Half Marathon at 6:15 and finished it one hour 18 minutes later.

If that kind of whirlwind weekend surprises you, well, you probably haven’t heard of Michael Wardian. Wardian, 42, of Arlington, Virginia, is known as one of the most prolific—and eclectic—elite runners on the trail-ultra (and road-marathon, and miscellaneous-running-challenge) scene.

Yesterday, as he waited to board a plane, Wardian was gracious enough to answer a few questions about his busy weekend (and life) over email.

I think everyone’s first question will be, why?

I wanted to see if it was even possible, how my body would feel. And to see as much of San Diego as I could, and share the course with awesome people.

I got to run with people I normally wouldn’t, and loved it. I ran with a little guy, maybe 12 years old, for about a mile. I was joking with him that I was not going to let him win, and it helped both of us.

I was emotionally and physically exhausted, but also completely stoked and feeding off the positive energy of the other athletes and the sense of accomplishment.  I was wired and buzzing around hanging out, taking pictures and cheering on the other runners for a bit.

Was the half-marathon planned, or a last-minute decision?

The half was super last minute. I had no idea how it would go.

I came out to run the SD 100 mile. The half-marathon was just because I was here and had always wanted to run Rock ‘n’ Roll San Diego, and to be a part of the San Diego running scene.

You race a lot. How do you conceive of your season or a year? Do you think in terms of “goal” races and tune-up races, training cycles and “peaks”? Or is the goal sort of an aggregate one, to run all these different events?

Great question. My goal each year is to continue to evolve as an athlete, and do different and fun things. I am trying to see what is possible for me.

I am always training for something and I try to build the seasonal each race helps me be ready for the next. Of course, if I am at a race I am there to throw down.

Between training, racing, family and full-time work (as an international ship broker), how do you manage it? Do you ever feel like you have to compromise on one of those things for the sake of another?

I think balance is key, and I have a ton of help. My wife, Jennifer, is always there for me and our boys, and my boss Keith Powell and sister Mariele (who I work with) allow me to do these things. Our clients are fans, too, and I have the most incredible sponsors and support from the community.

I am super passionate about it, and think that allows me to commit to getting up early and finding efficient ways to train. I bike or run to work, and run again at lunch. I try to keep my training as “invisible” as possible.

I love my life. It is a dream, and I seriously feel so, so lucky.

What’s next on the agenda?

A big goal this year is to set the fastest time for the World Marathon Majors. I still have Berlin, Chicago and New York, having already run Tokyo, Boston and London.

I might try to set a few Guinness world records, and would like to place in the top 10 at UTMB.

In 2017, I want to set the Guinness World record for seven marathons in seven days on seven continents.

I’ve got so many cool things, and I am always adding stuff. If you know of anything good let me know!