How Rob Krar and Christina Bauer Balance Running and Marriage 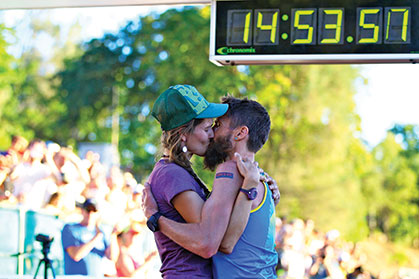 Christina and Rob embrace at the finish line of the 2014 Western States 100, after Krar’s winning performance. Photo by Glenn Tachiyama

In 2009, Rob Krar was a road runner riddled with injuries, unsure if he wanted to continue in the sport. Then a friend suggested they run TransRockies, a six-day team stage race in Colorado. Seeing it as a fresh challenge, different from the “hamster wheel” he felt he was on, Krar, now 38, agreed.

At TransRockies, he ended up meeting the love of his life: Christina Bauer, a talented trail runner from Salt Lake City who, earlier that summer, had come in third at her first ultra, the Speedgoat 50K. That week in Colorado, over evening meals and during free afternoons, Bauer and Krar chatted about their shared love of the outdoors.

Bauer, now 35, was wary of dating a competitive athlete because of the immersive nature of high-level training and the intense personalities it tends to attract. But with Krar’s training on the shelf, it wasn’t an issue when their romance began. After they married in 2012, Krar returned to competitive racing, with phenomenal success. In 2014, he won three of North America’s most competitive 100-milers: Western States (which he won again in 2015), Leadville and Run Rabbit Run.

Over the past two years, Krar and Bauer, who live in Flagstaff, Arizona, have been learning how to balance Krar’s rising star with a lifestyle that suits them both, not to mention full-time jobs—Krar recently decided to leave his gig as a graveyard-shift pharmacist to focus on running; Bauer is a counselor at a charter school.

What were your initial impressions of each other?

Christina: I’ve been a runner my whole life, but I never dated teammates in college. I was always like, “I am not going to be with a runner.” There was something about the runner personality. Meeting Rob at first, I really wasn’t that interested. I thought he was just another competitive runner dude.

Rob: It’s best not to push the subject. I say that jokingly and seriously. I don’t understand Christina’s mindset. She’s a talented runner. She could be winning a lot of races if she set her mind to it. But you have to run for the right reasons. I’ve really learned that in the last couple years since I came back from my injury [sciatica and Haglund’s deformities on both heels] and embraced ultrarunning.

What role has running played in your relationship?

Rob: I didn’t start running again for well over two years after 2009. We met, I had surgery and tried to start running right away, which was too quickly. I would have bet the bank that I would never run a race again. I quit, completely, and that’s when we both learned how to fly fish. We also did a bunch

of climbing, and went on road trips.

Christina always wanted to do backcountry skiing. Going into the winter of 2012, we both bought backcountry ski gear and got into the mountains. That’s what kick started my fitness, and led to me totally on a whim jumping into the Moab race in February [Krar set a course record at Moab’s 2013 Red Hot 33K; Bauer placed second among women]. Ski mountaineering is so key to everything. I won that race on no running.

What challenges does running present for your marriage now?

Rob: The commitment and sacrifices required from both of us for me to run at the level I’m running at is challenging. Last summer it came to a head. Two weeks after [winning the 2014] Western States, when I should have just been really happy, once that initial euphoria wore off, I was pretty miserable.

Christina: Rob was juggling his newfound running career and his job. He was depressed, and in that negative state of mind—the accomplishment was not as satisfying as it should have been.

Rob: That was an eye opener. After that, we knew we had to make some changes and find a better balance. We were reminded of the importance of casual outdoor forays together, and vowed to create time each week where running was not the focus. Dinner remains a sacred time, and it’s rare for us not to share an evening meal.

How long do you want to manage this lifestyle?

Christina: There’s always going to be periods when one partner’s goals are more central. This is Rob Krar’s time, so maybe I need to be Rob Krar’s wife and figure out how to make that work. Later on down the road it might be something for me.

What advice do you have for running couples?

This article originally appeared in our September 2015 issue.