Rory Bosio: The Steeper the Better 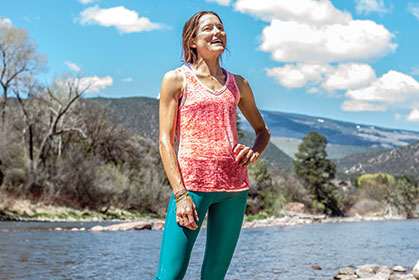 When she began running  ultramarathons in 2007, Rory Bosio, 30, of Truckee, California, quickly established herself as a top contender. But what sets her apart from many other champion ultrarunners is her laid-back approach, which seems to be working better every season. In 2013, on the sport’s grandest stage—the 104-mile Ultra-Trail du Mont-Blanc, which circumnavigates the hulking Mont Blanc massif—Bosio set a blazing course record (22:37:26). Then, in 2014, she won it again. We caught up with Bosio when she swung through Trail Runner’s world headquarters in Carbondale, Colorado, earlier this year.

Winning 8th-grade cross-country state championships; I was more nervous for that race than any other.

Completing my first 100-miler. It was Western States in 2010; it was such an unknown and a big jump going from 50 to 100 miles. I was picturing Dante’s Inferno and crawling through Hell. But it wasn’t that bad; I was much more hobbled after my first 50-miler.

Favorite terrain:
Steep. I like hiking up and running down. I hate flats, because I don’t have any speed.

Profession:
Pediatric intensive-care nurse. I work from three to 12 days per month.

Training philosophy:
I call it “intuitive training,” kind of like the hippy-dippy-love-your-inner-self approach. Seriously, I have no training plan, and I don’t wear a watch when I’m running.

Right now, I have a 100-mile race in couple of weeks, so I’m doing some long runs. For tuning up, I do more tempo-type runs or intervals, but it’s very loose. If I’m wearing my iPod, for example, I might run really hard for two songs, or run to a rock at the top of a hill. It just feels more race-like.

Weekly mileage:
I have no idea. I’ve never kept track. I did have a coach for my first two years, and used a heart-rate monitor and all that. It was good as a base but I got burned out. Plus, my coach dropped me because I wasn’t communicative enough, which made it easy to move on. I haven’t had one for five years, and running is less stressful and doesn’t feel like a chore.

Mental approach:
I look at running as bonus time, like fun time. It’s my release valve for everything else. It is an escape, like maybe church or drugs for some people.

State of women’s trail running:
Women’s participation has grown a lot. You see women go from a half-marathon to doing a 50K, which is pretty approachable for a lot of women. The stigma of it being extreme is dying down.

I also think the social aspect appeals to a lot of women. On the weekend, you can do training runs of three or four hours that are really social. And there are more women’s running groups too. The longer the distance, the better women perform. It’s that slow burn of pain women are good at.

2015 goals:
Branch out and do more adventure-type racing, with kayaking, mountain biking and running.

My biggest race this year is the Diagonale de Fous [a rugged 173-kilometer race on Reunion Island, France, in October], but I think the humidity could kill me.

Dream race:
Hardrock. I could do that, and call it a day.

In 5 or 10 years:
I would still like to be running, but not necessarily competitively. I could see doing one 100-miler a year for a while.

I’d also like to do more expedition-style explorations. I’m not really interested in the FKT, but just doing them.

This article originally appeared in our September 2015 issue.