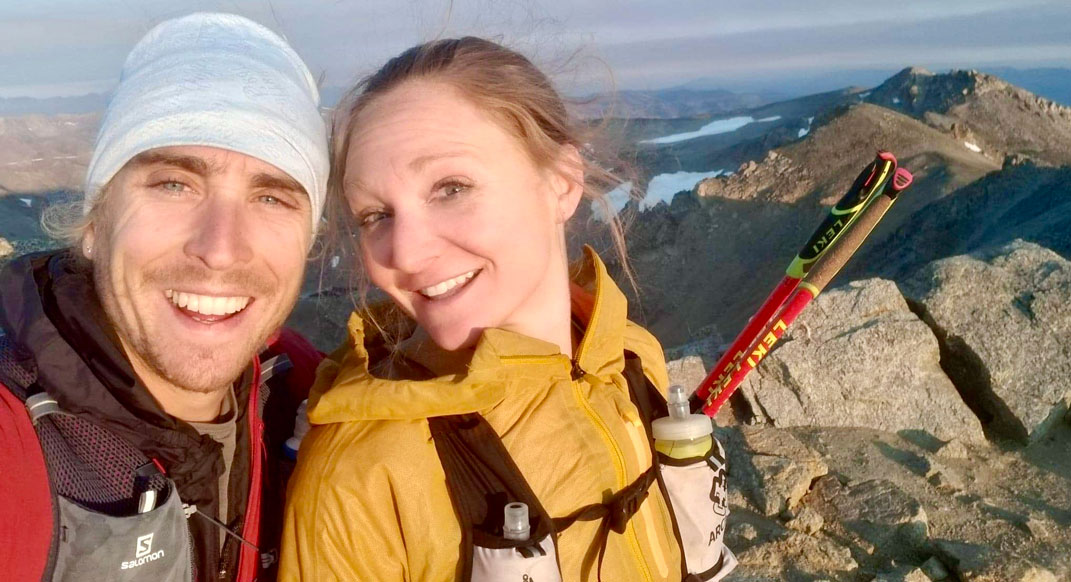 Stanley on the summit of Mt. Massive with Avery Collins amid the smokey haze of wildfires.

At 3:15 a.m. Monday morning, August 10, Sabrina Stanley was physically and mentally trashed and had all she could do to stumble forward at a slow, walking pace

And who could blame her? For the previous 45 hours, she had been crushing her way through the daunting Nolan’s 14 course in Colorado’s highest mountain range, at one point well ahead of the pace of every previous finisher except for Joey Campanelli, who shattered the overall Fastest Known Time with a new mark of 41 hours 33 seconds in early July.

At 100-plus miles and roughly 40,000 feet of elevation gain, Nolan’s 14 is one of the hardest high-mountain projects in the world. The route is open and often off trail, requiring the need to navigate over unstable talus and scree amid above-treeline exposure and inclement weather.

After suffering down the east slopes of 14,336-foot La Plata Peak in the hot late afternoon sun on Sunday, Stanley, a 30-year-old running and fitness coach from Silverton, Colorado, then had to endure a long, demoralizing through-the-night slog up and down Mt. Elbert, Colorado’s highest mountain at 14,443 feet. Misjudging two false summits on the 5,000-foot ascent was frustrating, but what was more confounding was a thick haze of smoke that had blown in from forest fires in western Colorado.

Although she had only 14,421-foot Mt. Massive ahead of her, Stanley was barely moving and insisted on taking frequent micro breaks to recover on the way down to Half Moon Road between the two mountains. She was 90-plus miles into the journey and within reach of setting a new women’s FKT, but she was in a bad place.

My mental state was the worst at that point and I definitely needed to sleep,” she says. “My lungs and my chest were so painful. I couldn’t get deep breaths. I sounded so raspy with a lot of shallow, really heavy breathing.

“My mental state was the worst at that point and I definitely needed to sleep,” she says. “My lungs and my chest were so painful. I couldn’t get deep breaths. I sounded so raspy with a lot of shallow, really heavy breathing. I had to stop every 10 minutes or so to get my heart rate down and my breathing under control. I knew that as soon as the sun came up the energy would return, but at that point I was struggling.”

That’s when her boyfriend and pacer, Avery Collins, pulled out a sleeping bag and laid down a sleeping pad and suggest she take a short nap. Stanley agreed and immediately passed out into what they both hoped would be a restorative slumber.

“I knew she needed real rest, but sleeping up at 14,000 feet you don’t really rest or have any recovery at all,” says  Collins. “It made more sense to get down to 10,000 feet at the trailhead and try and sleep so there would be some kind of recovery effect. I know from experience that 20 or 30 minutes can make all the difference. It was a shot in the dark, but I told her that 20 minutes was going to help tremendously, and it did.”

Stanley awoke after about 20 minutes of sleeping and felt refreshed. As the morning’s first light gave way to a hazy sunrise with falling ash from the fires, she and Collins made good time going up the steep, 3.5-mile section of trail to the top of Mt. Massive. Then she wearily ambled down the east face of the mountain to reach the Leadville National Fish Hatchery at 9:15 a.m., where she was met by her crew, pacers and friends to celebrate her new women’s FKT of 51 hours 15 minutes.

“It’s definitely all a blur, for sure,” said Stanley, an Adidas-sponsored trail runner who wore Adidas Terrex Agravic Flow shoes. “Mt. Massive was hard because it was the last peak and my body was shot, but it was easy compared to Elbert. It was for sure surreal to finish it.

“I really enjoyed the half hour or so at the finish, sitting in a fold-up chair with my crew and pacers around me, just kind of relaxing and socializing and talking about it after the intensity was gone. You can’t really do that at aid stations because you have to go, go, go, but it was nice just to be there and enjoy the moment before everyone went back to their real lives.”

With few trail-running races available because of the COVID-19 pandemic, Nolan’s 14 has become the target of a lot of trail runners. More than a dozen individuals have given Nolan’s a go this summer, including Campanelli, who took 12 hours off the previous unsupported FKT on the northbound route and more than five hours off the previous best supported time.

But since then, it’s been tenacious women who have been lighting it up in the Sawatch Range. Sarah Hansell broke the supported FKT Meghan Hicks set on the northbound route in 2016 by covering the northbound course unsupported in 57 hours, 43 minutes on July 7. Then it was Andrea Sansone, who traversed it in 53:14 jointly with Andrew Hamilton in a tandem self-supported style. Although that didn’t meet the criteria for a women’s individual FKT, it did raise the bar and set a new target for Stanley.

It’s not like a race where there is a set date and you look forward to that date and you start it along with a lot of other people who are going through what you’re going through engaging in a shared energy of it all,” she says. “On this FKT, I was out there by myself. I had my crew and pacers and I couldn’t have done it without them, but, unlike a race, I was enduring the whole thing myself.

An accomplished ultrarunner with wins at the Hardrock 100, Never Summer 100K and the Grand Raid La Reunion 170K, Stanley has proven she can tackle technical terrain in harsh conditions. But Nolan’s 14 was her first FKT attempt and she found the dynamics to be quite different.

“It’s not like a race where there is a set date and you look forward to that date and you start it along with a lot of other people who are going through what you’re going through engaging in a shared energy of it all,” she says. “On this FKT, I was out there by myself. I had my crew and pacers and I couldn’t have done it without them, but, unlike a race, I was enduring the whole thing myself.”

On the first night of the journey, she was on the traverse between Mt. Columbia and Mt. Harvard with Hicks along as a pacer. Although Stanley had scouted the line during the daytime a few weeks earlier and also did a test run at night on that section with Hicks, she was a bit disoriented from the lack of snow and an uncomfortable feeling of nausea.

“That whole first night with my poor route-finding and the nausea, it felt like a total loss,” she says. “Meghan was so supportive. She told me to keep moving at whatever lowest effort I could and it will come back. And I have had low points in races before, so I know the drill. But you just have to have that faith that you’ll come back. When the sun came up, it gave me a new life.”

Stanley had originally hoped to return to the Hardrock 100 in Colorado’s San Juan mountains in late July. She won that burly race in 2018, but it was canceled last summer because of excessive snow and dangerous avalanche debris from the previous winter. This year’s Hardrock was canceled because of the coronavirus pandemic, so Stanley and Collins both shifted their focus to Nolan’s 14.

They spent much of June and July scouting the course, camping adjacent to the route, looking at maps and running combinations of peaks. Collins made an attempt on the course on July 6-7 but bailed after seven peaks because of an acute bout of altitude sickness.

Stanley had hoped to start on July 20, but she missed a good weather window and then had to wait it out as rain scoured Colorado’s high country for more than two weeks. Finally, it looked like the rain was going to let up, so she gave notice to her crew and pacers and set out at 6 a.m. on August 8 from the south end of the route.

Aside from Collins and Hicks, Stanley also got help from her brother, Reece Stanley, and good friends Dean Eastham and Kate Tsai, who served as her crew, and Steamboat trail running pals Jenny Fox and Amanda Grimes, who helped with pacing duties. Along the trail, Stanley mostly fueled on Muir Energy gels, but at makeshift aid points she devoured cheeseburgers, pizza and just about anything else crew fed her.

Collins covered about 50 miles on course with Stanley—a lot more than either he or Stanley expected—plus he also covered a lot of ground meeting her at remote aid stations.

“I’ve told her a dozen times already how proud I am and how happy I am for her,” Collins said. “Her level of dedication is so high, far beyond what I can comprehend and put out there myself. It’s super exciting for me to have been a part of it.”

How long will Stanley’s FKT last? That’s hard to say, given the number of people training for FKTs with no races to focus on this summer.

“If you would have told me before I started that I would finish in 51:15, I would have been stoked and for a first attempt I am stoked about it,” Stanley says. “Now that I’ve done it, I know how fast I can go. But after doing it supported, for me to comprehend doing it unsupported like some of these women and men have, that blows my mind. That’s so inspiring.”