Send a Runner: A Run of Acknowledgement 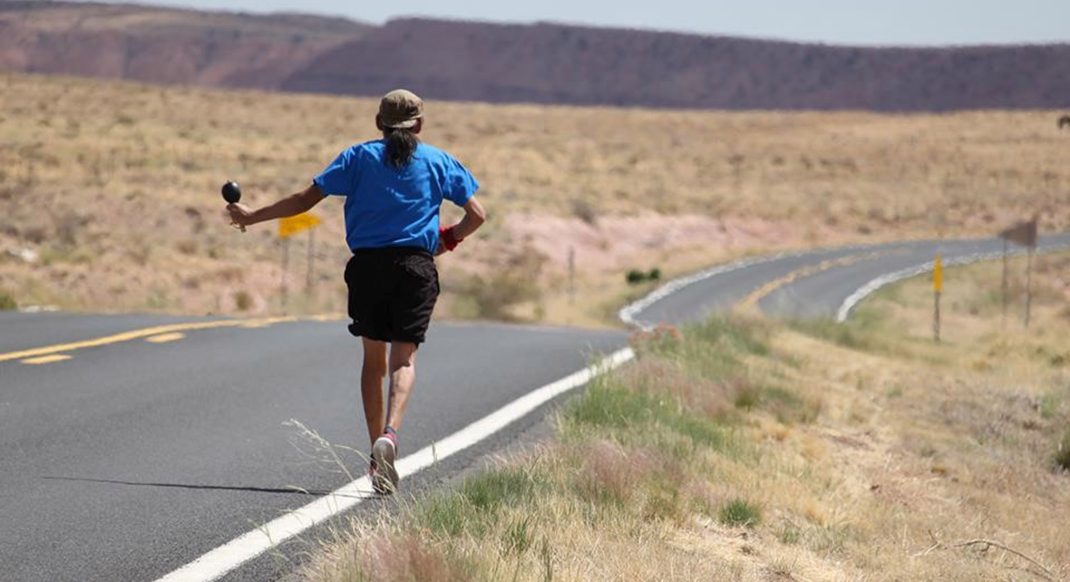 Although the book, Send a Runner: A Navajo Honors the Long Walk, chronicles the trials, tribulations and triumphant finale of a solo 330-mile run undertaken by Navajo Edison Eskeets, this April’s offering by Eskeets and Jim Kristofic from the University of New Mexico Press places far more emphasis on other topics.

That’s entirely as it should be.

Eskeets’ 15-day journey, completed in 2018, was layered with meaning, significance and beauty. He called it a dance, not a run. And his collaboration with skilled writer Jim Kristofic uniquely interweaves the Navajo people’s painful history with personal commitment and, ultimately, optimism for the future.

The fifth of Louis and Bessie Eskeets’ seven children, Edison Eskeets was born in 1959 northeast of Gallup, New Mexico. He began running as a young child, chasing after the family’s sheep and goats over rocky terrain at nearly 7,000’ altitude, and eventually developed into a standout distanceman at Gallup High School. Athletic scholarships to both Haskell Junior College (now Haskell Indian National University, in Lawrence, Kansas) and Bradley University (Peoria, Illinois) followed. Eskeets studied fine arts and continued his running pursuits for a decade far from home, eventually finding success in professional road racing before coming up just short of qualifying for the 1988 U.S. Olympic Trials Marathon.

Once back in the Southwest, Eskeets taught and coached at two innovative private schools before becoming executive director of Wings of America, a Santa Fe-based non-profit that utilizes running as a catalyst for empowering Native American youth. All along he continued his own running, which included a trio of ultra-distance efforts through the expansive Navajo Nation in the Four Corners region. In 2007 Eskeets moved on to the position of trader at Hubbell Trading Post National Historic Site in Ganado, Arizona. Not long after arriving at Hubbell, where he has daily contact with Navajo, Hopi and other Native peoples, Eskeets began contemplating a final ultra-distance run in honor of the Navajo Long Walk.

In 1864 more than 10,000 Navajo men, women and children were captured by the U.S. Army and forcibly marched from near Canyon de Chelly, in northwest Arizona, to a desolate encampment in eastern New Mexico. Several thousand died en route and during four years of imprisonment at a place called Bosque Redondo. But, amazingly, most survived the brutal experience and returned by foot to their homelands, in accordance with the Navajo Treaty of 1868.

It was this haunting and yet triumphant episode in the history of his people that Eskeets wished to honor by running the route of the march from Canyon de Chelly as far as Santa Fe. While he had no fear of the distance, apprehension about his spiritual resilience crept in:  would he be emotionally up to the task of retracing all those painful steps?

Send a Runner is organized chronologically, with each of its 15 chapters corresponding to a single day of Eskeets’ 330-mile journey. Kristofic’s engaging writing style achieves an effective back-and-forth between occasional vignettes from different points in Eskeets’ past and frequent episodes – often humorous, occasionally poignant — from out on the road.

As the book progresses and the run edges closer to its completion at the historic Plaza in Santa Fe, readers gain a perspective on five centuries of Southwestern U.S. history and the importance Native Americans place on their sacred lands and all living things. Also revealed are fascinating aspects of Eskeets’ life story and motivations as well as his unique perspectives. The run’s support crew — composed of Eskeets’ sister Lorraine, her husband, Jason, and their teenage daughter, Jay-Lynn – plays a vital role as the lone runner covers almost the full marathon distance each day, much of it along dusty shoulders of baking, wind-swept roadways.

Eskeets approaches Santa Fe on Day Fifteen. It is June 1, 2018 – 150 years to the day since the signing of the Navajo Treaty of 1868. He’s at his absolute limit, both physically and emotionally. But the beauty of the land Eskeets travels through, and the meaning behind the dance he’s committed to completing, propel him onward, until he finally delivers the message he’s carried with him for so long.

Following are two excerpts from Days Seven and Eight of Send a Runner, roughly halfway through the run. The passage describes Eskeets’ approach to Tsoodzil, the Navajo (or Diné) name for Mount Taylor in northwest New Mexico. Tsoodzil (“blue bead mountain”) is one of four sacred peaks marking the boundaries of the traditional Navajo homeland. In June of 1868, as they returned from four years of imprisonment at Bosque Redondo, several thousand Navajo fell to their knees and wept when Tsoodzil came into view. They knew they had returned home.

We take to the quieter, slower pace of Route 66 running alongside Route 40. Screams of steel and glass cut the air. The crickets sing loud through the screams in the grass along the highway barrier.

To the north, red mesas lift to the sky. The plains of sagebrush, white clay, and thin grass open to the east. Spreads of grama grass, bulrush, and cattails emerge from wherever water finds a low spot in the land. To the south, the heads of the Zuni mountains rise in dark piñon and ponderosa pine.

They are almost the same word in this country.

He is sitting after the last two miles. Tsoodzil looms before us in pyramids of blue and green shadow.

I ask what he thinks when he sees that mountain. Edison says he thinks of words. Songs. Ceremonies. He says it’s a fair question, but I know he’s not ready to answer it. He runs.

Cebolleta Mesa rises dark and jagged through a haze of heat at the base of Tsoodzil. Beyond lie the lands of Chaco Canyon and the stories so old they are lost in sand.

“I’ve really been needing quiet time lately,” he says. He confesses he was even annoyed by a prairie dog that ran alongside him for fifty yards that morning. “I need just quiet time to recover from the experience. It’s strange. I’ve never needed that before. I think it’s the age. But I’m also feeling a lot. A lot. There are burial grounds all along here. This is where they would have walked. They were traveling over there. The children wouldn’t make it. The grandparents couldn’t make it. The parents would dig a little grave. They’d say, ‘We put you in there. We’ve tucked you in. Be well.’”

I ask what he feels now.

Edison doesn’t sit in the chair. He keeps moving another two miles. Manufactured homes tilt on their weak foundations between reedy Siberian elms next to dilapidated, unlivable houses built along the previously bustling Route 66. But the world moved on, just a hundred yards over and fifty miles per house faster to the Interstate Route 40. The trucks rumble and scream west. The crickets scream in the grass, until it is all one scream. Until the scream becomes a song Edison hears while he is running.

He stops. Tsoodzil staggers to the sky.

Edison whispers, “Beautiful. There it is. It’s thinking, ‘Hey. What’s all the fuss about?’” He takes water. He can’t take Sobe anymore, so if I want any I can help myself. He also can’t drink Gatorade. He’s taking a premixed Arizona sweet tea now.

“I can really feel it here this morning,” he says, rubbing the flexors, the psoas, the sartorius, and the other bundles of muscle around his crotch and inner legs. “You just want to moan from the pain. I know it’s the age. You need to nurture it and really take care of it. If you don’t maintain it, you have nothing left to take the weight. It all comes back to the water, the vitamins, the muscle. You’ve got to look after it. You’ve got to be smart.”

Edison leans forward over his worn shoes. He looks to the mountain. “This is not smart.”

He runs another two miles. He walks off the pain.

Edison had his checkup at Sage Memorial Hospital in Ganado medical center before this run. The nurse there took his vitals and his blood pressure.

I ask what he would have told her if she had asked.

“Stay active,” Edison says. “And move what you eat. You’ve got to use it. Just stay moving.”

From Send a Runner: A Navajo Honors the Long Walk by Edison Eskeets and Jim Kristofic. Copyright © 2021. University of New Mexico Press, 2021.