The Cowboys VS Everybody—Even Themselves

Walmsley, the straight-shooter, is going to win. Freriks, the town darling, is also going to win. Hazen, the steady politician—definitely going to win. Reed, timid yet calculated, is certain to win. Senseman, the wildcard, winning. 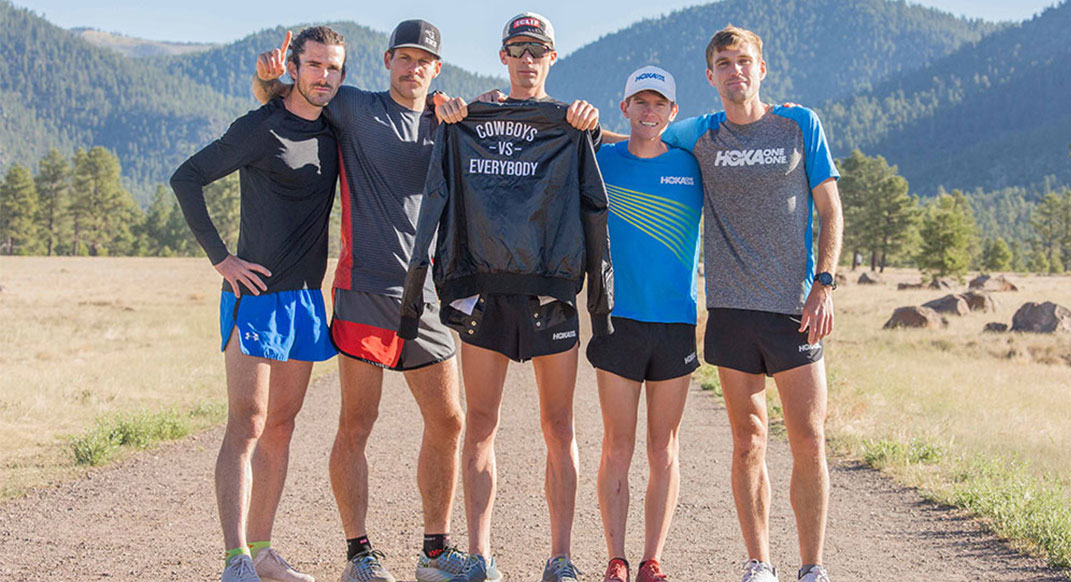 Since this article was published, Jared Hazen pulled out of Western States with an injury. We wish him a speedy recovery.

The Western States 100-Mile Endurance Run: The horse-race-cum-footrace, from Squaw Valley to Auburn, California, is where legends are born and where runners go to launch themselves into the elite ultrarunning scene.

It carries some of the most impressive performances in ultrarunning history, like Ann Trason’s mind-boggling 14 wins, two of which were second-place overall. Scott Jurek became a public figure after winning WS100 seven times. In 2011, Kilian Jornet took home the Cougar champions trophy, increasing the popularity of the race internationally. And in 2012, Timothy Olson set a new course record, running 14:46, while Ellie Greenwood bested Ann Trason’s course record, finishing in 16:47.

2018 is no different, with incredible talent for both the men’s and women’s fields. This year is unique, however, in that on Saturday, June 23, a group of teammates, five running partners, toe the line together.

The Coconino Cowboys are a group of five runners, based in Flagstaff, Arizona, who are close friends and training partners: Jim Walmsley, 28, Tim Freriks, 27, Cody Reed, 26, Eric Senseman, 29 and Jared Hazen, 23.

Walmsley and Freriks grew up in Arizona and competed against each other in high school. “In Arizona high-school running, Jim was the only guy putting in big miles and getting big results,” says Freriks. “He was a huge front runner and was idolized by the younger guys in the state.”

Freriks had his own success as well, running sub-9:00 for the 3200 meter and then went on to compete at Northern Arizona University. At NAU, Freriks and Reed became teammates.

The last year has all been a lead up to this Saturday’s race, with each Cowboy qualifying for Western States on his own and the other group members being present to pace and crew along the way.

Reed, who put in the miles but hated the idea of longer slower races, looked up to Freriks and the other upperclassman he ran with. “They were just the grinders, doing high mileage, yet were still super fast,” said Reed in an interview with Trail Runner in 2017.

Walmsley and Reed met after college and the three started running together in Flagstaff. Reed then crewed Walmsley and Freriks at the 2016 Lake Sonoma 50, just as Walmsley was exploding onto the scene. In the first five months of 2016, he had set course records at the Bandera 100K and the Red Hot 55K in Moab and finished first in the Mesquite Canyon 50K in Arizona.

Driving to Lake Sonoma, Walmsley, Freriks and Reed shared their general stoke around ultrarunning and recognized if they trained together, they could turn heads. Walmsley proposed the name, “Coconino Cowboys.” “It’s a nod to the county that Flagstaff and the Grand Canyon are in,” he says.

In the spring of 2017, Senseman and Hazen moved to Flagstaff and were “baptized by fire in the canyon,” says Reed. Senseman had been running ultras since 2011 and had seen success in the 50K and 50-mile distances. Hazen actually beat Walmsley at the 2015 Lake Sonoma and had finished Western States twice, finishing 14th in 2014 and third in 2015.

With the Cowboys christened, it was time to light the fire.

All five headed to the 2017 Western States together to crew Walmsley who wanted to avenge his 2016 defeat (he took a devastating wrong turn at mile 92, dissolving his course-record pace and landing him in 20th place).

At mile 78 in the 2017 race, however, Walmsley dropped out, unable to keep water or nutrition in his system. With his friends by his side, the mission to turn the 2018 Western States into a “Cowboy Jamboree” was formed as the other four Cowboys accompanied Walmsley on the walk off course.

The past year has all been a lead up to this Saturday’s race, with each Cowboy qualifying for Western States on his own and the other group members being present to pace and crew along the way: Reed qualified with 2nd place at Bandera 100K in January, Freriks won the Black Canyon 100K in February, Hazen finished in 2nd at the Lake Sonoma 50 and Senseman had a dramatic celebration for his finish of 4th place at Lake Sonoma (typically, to qualify, racers must finish top two but two of the leaders were already headed to WS100).

Freriks, Reed and Senseman are all first timers to Western States as well as to the 100-mile distance. Watch

Trail Runner was lucky to catch up with them recently for some interviews and, though these guys have put in the trials of miles together, it became immediately clear that once that gun goes off, it’s every cowboy for himself.

What are you most nervous about WS100?

Freriks: Western is a notoriously hot race, so heat management will be a challenge. I’ll be erring on the side of caution for the first half. I’d like to get to Forest Hill [mile 62] feeling good; I’ve heard the race starts at Forest Hill.

What are you most excited about for WS100?

Hazen: I’m most excited to cross the river and run the last 22 miles. I like that section.

Freriks: I’m looking forward to the finish and sharing stories from the race with my buddies who were out there.

What is the Achilles heel of your training or racing?

Reed: The feeling of inadequacy when I’m surrounded by some of the best runners in the world in Flagstaff. It seems like every day is a great day for them; especially when I have a bad day, it makes it that much harder.

Freriks: Sleep. It can be a struggle getting enough sleep working three 12-hour shifts.

Hazen: Training too much. When things are going well, I have the tendency to continue adding mileage.

Walmsley: Ha, my Achilles. I always have aching Achilles, typically caused by faster running, like track workouts. I’ve had to wear a night splint [rigid boot] to keep my foot flexed upward.

Reed: I want everyone to do well. I think our team goal is to all make it to Auburn, but it is every man for himself out there. I need to let the race come to me and not try to force anything too early.

Senseman: Cody is thinking about all of this too much. Once that gun goes off, I don’t care about any of these guys. That’s real. Don’t get me wrong, I think everyone is pulling for each other, but I want to beat all of them.

Hazen: You don’t want to be the fifth Cowboy.

Freriks: There is a similar feel to cross country and I’ll try to carry forward some of that mindset, that I’m out here with these guys who I’ve worked really hard with, all trying to achieve the same thing. Chances are that Jim takes it out fast, and who knows if he’ll ever come back to the field.

Walmsley: We won’t compete as a team. We’ll all be running, but that’s it. This year, I don’t want to go out as aggressively from the start. I’d like to drag the guys chasing me along if I can, that way if I blow up, they blow up too. It’s hard to do nowadays, though, because more and more, people are just letting me go.

I think Francois D’Haene has the target on his back, but Tim Freriks, Jared Hazen, Kris Brown and Mark Hammond are all strong and will be contenders. I hope to keep Francois flirting with the ‘this is just too fast pace.’ I learned a lot from running with Cat Bradley in the Grand Canyon—it’s not about running balls to the wall the entire time between aid stations. Moving through aid stations fluidly and not wasting time is critical.

Best thing about being a Coconino Cowboy?

Hazen: We get free pizza at Pizzacleta on Sundays in Flagstaff.

Walmsley: We’ve grown into more of a family, and like a family there can be disagreements. This may be on my part more than the others, but I’ve had a few moments where I just can’t deal with all the scheduling. Like a family, the other guys understand; I don’t think they hold it against me.

Reed: Scheduling with Jim can be really difficult.

Jim, what advice would you give your competition if they want to beat you?

I think after my track record here, it would probably be to ignore Jim and compete with everyone else. I believe I can run at a suicidal pace, and that other people have a governor that’s like “that is so stupid.”

It gives me an opportunity to go and do something special when the “that’s so stupid” turns into “that is the most amazing run I’ve ever witnessed.” It takes some ignorant belief, it’s one of my most powerful tools.

Where do you find motivation?

Freriks: Some of the everyday stuff that I see at work [Freriks works as a nurse in an Intensive Care Unit]. I find inspiration in patients who are faced with tough diagnoses and handle that with grace and stay positive.

It puts running 100 miles into perspective. It’s a sport. It’s not life or death when we are out there. Really it is just putting one foot in front of the other.