The Unexpected Prejudice of the Trail-Running Community

Coree Woltering, black and openly gay, laments being judged for … being from the Midwest 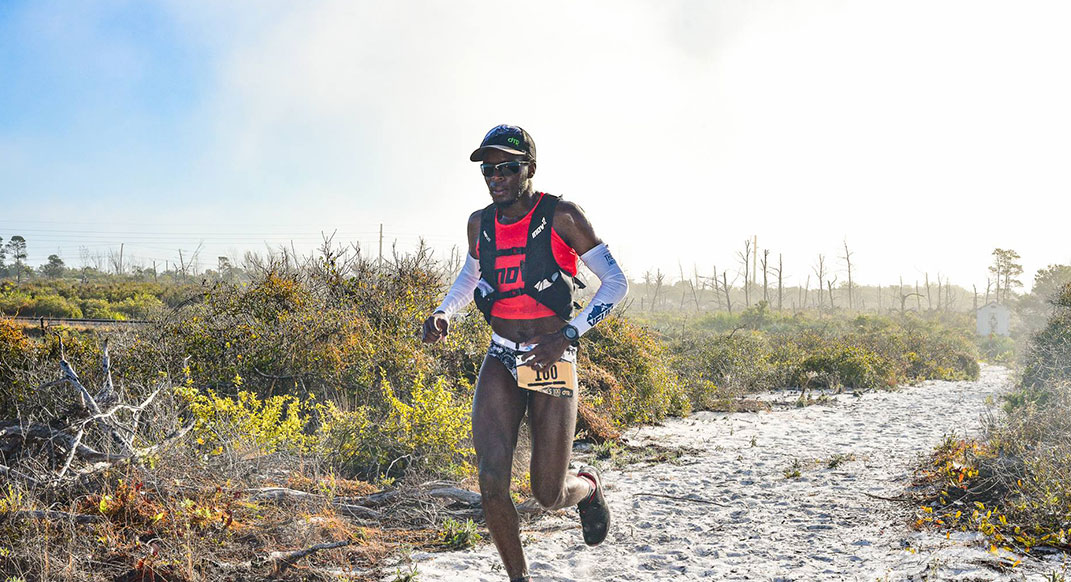 Woltering at the Dunes 100 in Florida. Photo by Michael Brown

It was the week of Valentine’s Day, 2016, when Coree Woltering came out to his extended community. Via a Facebook post, he announced his engagement.

“That’s just how I’m going to come out,” he says, “so I posted to Facebook, ‘I’m getting married this year.’ And people were like, ‘Oh, my God, he’s getting married, and not to a woman … to some guy named Tom.’” His close family and friends knew already and, leery of wondering how to do it for the rest of his network, he figured a universal announcement was easiest.

“I’m one of those people who’s just going to do something if I want to.” The response was largely positive—Woltering figured people could just unfriend him if they wanted to. Only a couple did.

This type of top finish is nothing new for the 28-year-old who lives in Ottowa, Illinois. Of the 24 races on his UltraSignup page, Woltering has placed top five in 21 and championed 13. In 2016, at the age of 26, he won the Tunnel Hill 50 in Vienna, Illinois, with an average 6.6-minute pace. After that performance, Inov-8 approached Woltering for a sponsorship, which he gladly accepted.

“I don’t think I’ve ever heard Coree make an excuse,” says his coach and friend, David Roche. “Sub-zero wind chill and snowing? He gets it done. Crazy life events getting in the way? He makes the time. Poor race? He smiles and comes back with more fire than ever. I’m not sure where that work ethic and perseverance comes from, but, if we could bottle it up and sell it, we’d be billionaires.”

Growing up, Wolterning’s favorite distance was the 400 meter. He started track in the 5th grade and, though he also ran cross country throughout his education, preferred the shorter distances. He went to state for the 400 and 800 in junior high and for the 800 in high school, and the 400 and 800 remained his distances in Greenville College in Southern Illinois. Running cross country in college was a chore for Woltering.

“I liked the courses that were on the golf courses because they were smooth and fast. I didn’t like the ones in the woods,” he says.

A series of injuries throughout college led him to swimming and biking—once he’d recovered, he realized he was well poised to race a triathlon.

Woltering ran his first triathlon, Evergreen Lake in Illinois, in 2010. A friend convinced him to sign up for a Half Ironman and, during that race, in 2012, he qualified for World Championships. He went on to race at Worlds in 2012 and 2013. Woltering stayed in the triathlon and Ironman sphere for two years before moving to Colorado to try to be a professional athlete.

Within a couple of months, he was burned out, not realizing the altitude was significantly affecting his body. He put his racing on hold and, during his hiatus, agreed to pace a friend at the 2014 Leadville 100. He was blown away by the atmosphere of the race, the town and the community.

“Just driving into town,” he says, “was amazing. The mountains in the backdrop and the excitement of watching the runners come down off Hope Pass to the turnaround point.” He caught the bug while doing his leg. “I did Hope Pass to Twin Lakes. I’d never been on a mountain that high. I realized trail running was really fun.”

Deciding to try his hand at longer distances, Woltering signed up for the Quad Cities Marathon in 2014, and ran 2:37. “I had only run 16 miles prior to that,” he says.

Within a year, he entered the Silver Rush 50 in Leadville and placed 4th, then won every trail ultra he signed up for in 2015, including Tunnel Hill, the Malibu Canyon 50K and the Herb Parsons Trail Half Marathon.

But Woltering’s boyfriend, now husband, Tom Aussem, was back home,  in Illinois. After Woltering’s grandfather died, he decided to move home to be closer to his family. Out of the west, Woltering realized his performances weren’t having the same impact as other athletes’. He was still running well, but not running the big races. When Woltering ran 5:30 at the Tunnel Hill 50 in 2016, it made nary a ripple in the community. If that race had been one of the marquees, it may have had a different impact.

“I don’t always race the most competitive races,” he says, “but it’s not practical for me to get on a plane and go to all the big races.” Woltering and his husband, a professional skydiver, travel to all his ultras together so Tom can crew for him.

Woltering’s experience as a competitive trail runner isn’t influenced by the fact that he’s gay or black. He feels the heat when it comes to his home trails—in the Midwest.

“People don’t think the Midwest is a real trail-running place,” he says. “I used to get frustrated because I’m like, ‘Is it because they don’t like me? Is it because it’s not technical enough?’ But there’s so much nearby; we’re only two hours south from the Ice Age Trail.”

Without the traditional role models of the running community, Woltering was making his own way from the get-go, and he’s not afraid to stand out.

Chrissie Wellington was his role model as he was getting started. “She could run a 2:55 marathon at the end of an Ironman.” As he was getting into trail running, he saw the icons as white, long-haired 20-year-olds. But this didn’t distract from his efforts.

“I didn’t know who was who or what was what. One of the first races I did was the 2014 Durango Double in Colorado. Dakota Jones was in the race and I really went for it. I didn’t know who he was and after I learned, I was like, ‘OK, I just tried to go out and beat Dakota Jones.’”

This doesn’t mean Woltering wouldn’t like to see more diversity both on the field and in the media. “When it comes to sponsorship, not everyone has to be long-haired and blue-eyed to get sponsored. I’d challenge sponsors to diversify their athletes. For some people, they would like to have a role model that looks like them.”

Woltering is now focused on hill training as he looks toward the Quicksilver 50K (which boasts 6,000 feet of elevation gain). Then Western States happens in June, where his husband will be crewing for him.

Great write up, though you got the vert on the Quicksilver 50k very, very wrong. The 50K has a smidge over 5000 feet of gain. http://quicksilver-running.com/page-18185

Thanks MDH! The error has been corrected. Cheers.

Actually it is around 6000 ft. As per Quicksilver 50K website: http://quicksilver-running.com/page-18139

I really enjoyed this article. I wish Coree the best in all of his races! P.S. taking photos of Coree was the easiest thing I have had to do. The dude is incredibly photogenic!

Where’s the ‘unexpected prejudice’ that the headline declares? There is nothing in this article to suggest that anyone has treated anyone else in a prejudicial way. There might be some cases of people wondering about the sartorial eccentricities of others, but that’s about it really.

Obviously we don’t feel guilty enough. We can’t find our prejudices without “journalists” pointing them out for us.

It was a twist. The prejudice isn’t that he’s gay or black. It’s that he’s from the Midwest

Happens all the time if you’re from the Midwest – people don’t think we have any kind of authentic outdoor experience here – I’ve seen it time and time again. At one point in time in my state, one of the outdoor publications lamented that we even have a National Park, as if we were not deserving. I love the west as much as anyone, but every place has beauty and opportunity.

Excellent feature! Glad to have Coree as part of the community ?

Seems anything short of a Western States top 10 or a slog through “Hardwalk”, and someone’s otherwise strong performances and ability are minimized…and I live in CO. Cool to know a little more about a strong runner!

We were all staring at Coree at the Frozen Gnome.
He was wearing a speedo in below zero weather.

Great article. Would be nice for you to feature diverse athletes in the trail running community more consistency. There probably aren’t that many but more then you think. Also how about the subject of sponsorships? They truly lack diversity, and it periodically gets mentioned, but never addressed by these top companies that are sponsoring the ” Blue eyed, pony tailed…” runners…

That’s an inflammatory headline, which, if one didn’t read the story, would lead one to believe this is about racial prejudice in our community. How about being positive? How about being accurate?

Coree is a good friend of mine. We met years ago after I saw him running in Boulder by rez and caught him. After some pro level trash talking we were quick friends. Training together was unusually unfair and difficult ALWAYS. Coree is a phenomenal talent and deserves incredible support from sponsors and race directors. He has earned it consistently in all conditions with inadequate sponsorship. Pretty sweet the attention he is finally getting. No, he is not from Kenya.
Andrew G.

I ran across Coree at the gorge last year, he’s a great guy. I certainly remember seeing this guy run by me in a speedo and thinking dang that dude is fast! (And chuckling a little bit because of the speedo)