A runner and her dog enjoy van life and trail running across the west, from Oregon’s Mount Baker to Utah’s Uinta range. 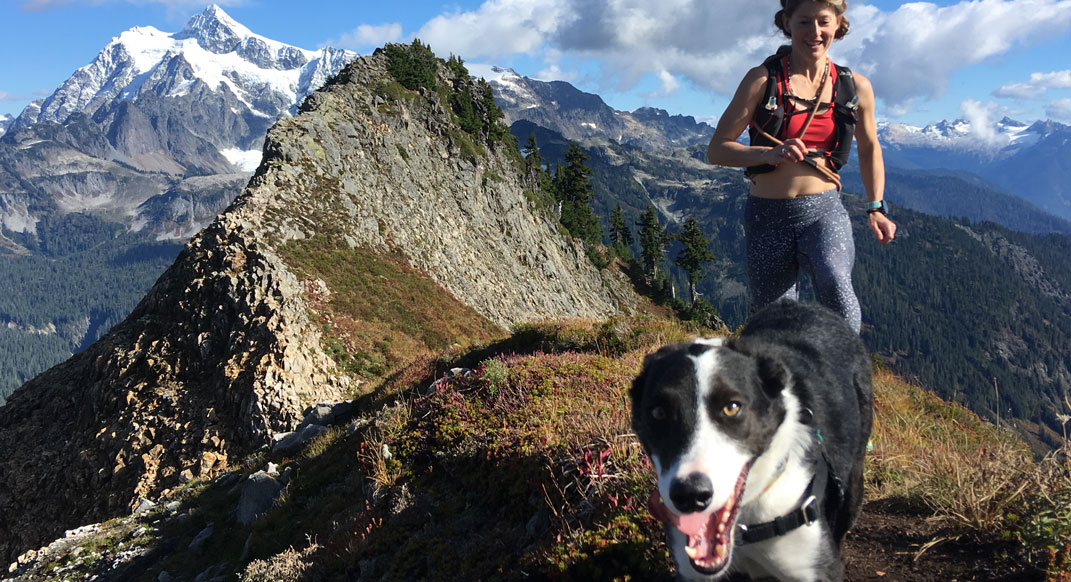 “I’m not a dog person. I’ve never been drawn to dogs,” says Sarah Bard. “I grew up with pets, but I travel a lot, and cats are great in that regard. They’re more autonomous.” Bard was so adamant on the point that two and a half years ago, she told a guy she was dating, “I will never get a dog. If you need a dog in your life, date someone else.”

Then, Bard got a dog.

One day, out of curiosity, she visited Petfinder.com, and spotted Little Sue. “I just thought, ‘We’re going to get along.’ It was love at first sight.”

On the face of it, a dog did not seem like a good match for the 35-year-old from Bend, Oregon, who at the time ran more pavement than dirt—and miles spent running with cars and trucks flying past isn’t ideal for a four-footed partner.  And, there was the matter of the van, which Sue was living in.

“I wasn’t sure the adoption agency would allow me to take her. I told them I was a runner who lived in a van.” Fortunately, the agency thought it was a good match.

They were right. Sue took to van life, and together the two have roamed the west for the last two years, running, mountain biking and hiking from Oregon’s Mount Baker to Utah’s Uinta range, and checking out cities from San Diego to Tucson. Bard works doing research support for a pharmaceutical company, a career that dovetails nicely with van life.

Life before Bard hadn’t been easy for Sue. Her breed, a McNab Collie, is a short-coated herding dog that’s ideal for working on hot western cattle ranches, amid burrs and brush. Sue was raised on a ranch in eastern Oregon, but the work apparently didn’t suit her, and she ended up at an adoption agency called Herd You Need A Home, in Bend, Oregon.

“To a farmer, dogs are a tool,” Bard explains. “If they’re not working, the farmer’s just going to shoot them.” Herd You Need A Home has been busy, according to Bard, and Bend is now filled with herding dogs.  “Bend is such an active community,” she says. “Pairing herding dogs with residents is the optimum symbiosis.”

Bard says Sue was described as a “take-it-or-leave-it” exerciser. “She’s like a Border Collie, but less obsessed.” The evidence, however, perhaps veers more toward “take it” than “leave it,” a preference that Sue has communicated very clearly at times. Headed out for a run in Zion National Park last winter, Bard left Sue in the van.  Sue destroyed her National Parks pass. “When she sees the pass come out, she’s knows she’s going to be left in the van, and won’t go on an adventure,” explains Bard. (Dogs are not allowed to roam far from paved roads and trails in National Parks.)

The timing of Sue’s arrival in Sarah’s life was fortuitous. A year prior, Bard had gotten divorced. Her running suffered. “Running was a big part of my identity, but I had a hard time wanting to run. I wouldn’t run for weeks. I was really out of shape,” Bard confesses.

Enter, Sue. “Bringing her into my life and seeing how happy she was running helped me reconnect with the joy I had from running.” Bard’s comeback included a shift to trails to benefit her new sidekick. She went on to tick off a variety of mountain races, including Utah’s Speedgoat, Big Sky Montana’s The Rut and Bellingham, Washington’s Chuckanut.

Sue is not the perfect partner, however, and often sprints off, following the scent of deer, rabbits and elk. “I love the joy on Sue’s face when we go out. I’d rather sacrifice 30 minutes waiting for here on a run so we can do it together than run alone.”

To reduce the risks, Bard has purchased a GPS collar, and can now track her roaming partner when she is within range of a cell tower. Sue always comes back, though—except for the time hikers, trying to be helpful, took her to the nearest ranger station, in Glacier, Washington. Sarah waited for almost two hours before stopping there, in search of a signal to track Sue. “Is this your dog?” a ranger inquired.

Now that the two are settled into their relationship, Bard is searching for balance. “After this year, I’m going to go back to road running, focusing on Comrades and trying to get on the world 100-kilometer team. [Comrades is the world’s oldest ultramarathon. The 89K South African race hosts 25,000 runners each year.] “I want to see what I can do on the world stage,” says Bard, who has already accomplished much, including top-10 finishes three times in Comrades. She was also a member of the 2015 U.S. 100K team that won the gold medal in the Netherlands. She placed fourth overall.

One solution in the search for balance? Bard passes Sue to friends and her partner, Craig Gorder, so she can focus on road workouts. The change is challenging for both of them. “I’ll start to head out for a road run and she’ll look at me … and I’ll change my shoes!” says Bard. “It’s hard for me to leave her.”

If Sue and Sarah seem tightly bonded, it doesn’t mean that Sue is a one-human dog. “People say I’m her ‘dog mom,’ but it’s really more like we’re roommates and friends,” jokes Bard. “Sue seems to like other people as much as she loves me. I love that about her.” Case in point: Bard once found Sue on her back, surrounded by little kids who were literally “petting” Sue’s eyes, running their fingers across them.

Her tail spins in circles around other people, and Sue is very attentive to the needs of others. She never jumps on kids, and she’ll stop pulling on her leash when a friend’s three-year old tries to walk her. “I don’t like her jumping all over me,” Sarah says—and Sue apparently understands.

All of this makes Sue arguably more popular than Sarah, something the human takes in stride. In Bend, it could just be that Sue is better known than Sarah. “I go to a weekly dinner in town,” says Sarah, “And if Sue’s not with me, people say, ‘Hi Sarah, where’s Sue?’”

While van life suits the two of them, a few adjustments are looming this winter. Bard recently started renting a small cottage close to Flagstaff, where Gorder is going to nursing school. “Winter will be in the cottage, for sure,” says Bard. Sue, it seems, will have to find another corner where she can curl up.

Running with Sue has widened Sarah’s appreciation for the sport. “I came from a marathon background, where every run had a purpose,” says Bard. “Now for me, running is more of an adventure.” Credit the McNab Collie at her side. “I cannot imagine a better dog.”

SUE BY THE NUMBERS

Name: Sue, more formally “Little Sue.” Says Bard, “When I called about adopting her, they warned me that she wasn’t so little—she’s taller than a Border Collie.” I think she was named “Little Sue,” because she can curl up in a tiny ball—much smaller than you’d expect.”

Longest run: 34 miles in Bellingham, Washington. “Sue’s breed is supposed to go 100 miles a day if she needs to,” says Bard, “but 30 is enough for me on a training day!”

Best trail-running feature: Conserving energy. “She doesn’t run faster than she needs to,” says Bard. “I think that’s why she can run all day.”

Preferred food:  Half and half. “I drink half and half in my coffee,” explains Bard. “I put some on her dinner once, and now she won’t touch dinner without it!”

Worst skill:  Dog games. “She gets excited about fetch, but then she’ll watch the ball as it bounces away,” says her human companion. “She’s more of a football defenseman. She likes to block other dogs from getting the ball.”

When Sue’s not trail running: Because they’re together nearly all the time, Sue tends to do whatever Bard is doing. “I wouldn’t say she’s a Velcro dog, but she does follow me around. She’ll sleep all day or hang out at a coffee shop while I work.”

Worst thing Sue’s ever done: “I recently baked a molasses cake,” says Bard. “I left it on the counter and went mountain biking, leaving her at home. She pushed the cake onto the floor but didn’t eat it. That was a statement!”

Love the rescue story but if you can’t keep Sue under control she should be on a leash!