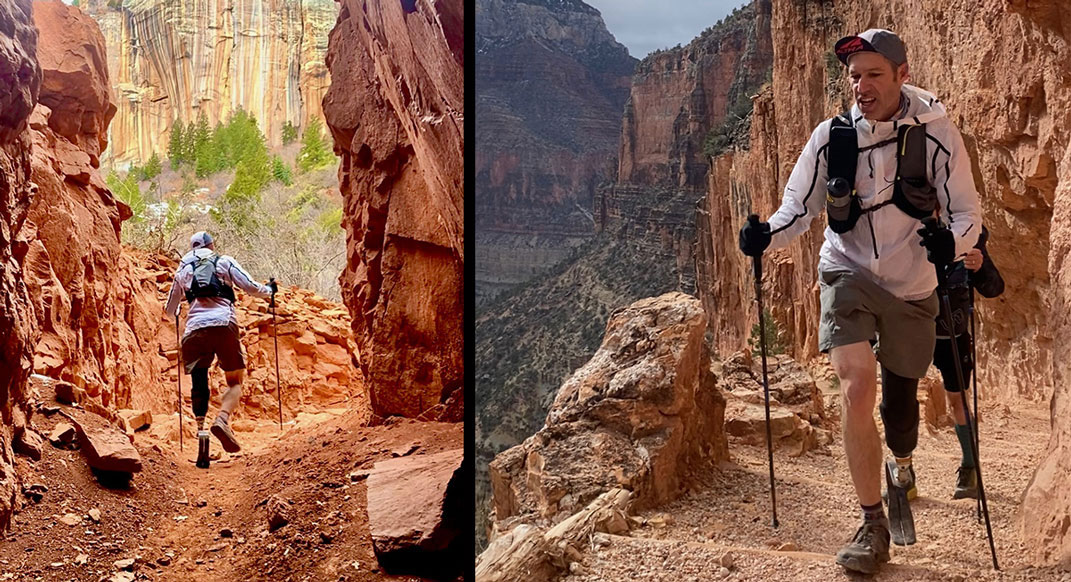 Let’s be clear, Dave Mackey has nothing to prove to anyone at this point.

The 51-year-old Altra athlete ambassador is already one of the most accomplished trail runners in America, having won several U.S. ultrarunning titles, set a handful FKTs and three times finished among the top-10 at the Western States 100. He’s also turned in strong efforts in the Marathon des Sables in Morocco, Hong Kong Ultra 100K and CCC 100K in Chamonix, France.

So he has nothing to prove—except maybe to himself.

In late 2016, Mackey chose to have his lower left leg amputated about 18 months after suffering a horrific fall while trail running in his hometown of Boulder, Colorado. After 13 surgeries, his badly injured left leg wasn’t healing so he took a proactive approach to eliminate the pain and frustration, with the idea of eventually continuing to pursuing the trail running challenges he loves as an amputee.

In took some time, effort and patience to make that transition, but since getting used to running with a carbon-fiber running blade, he’s twice completed the six-event Leadman competition in Leadville, Colorado, and has competed in many international multisport adventure races.

Last week, he and good friends Bob Africa, Mike Hewitt and Charles Corfield quietly dropped into the Grand Canyon for a reprise of the classic Rim to Rim to Rim adventure run. Although Mackey ran with friends, he was essentially ran unsupported without any assistance.

“It was fun,” Mackey says. “I had no idea how long it would take. I thought maybe 12 hours or slightly under that. It was definitely a lot harder than I thought it would be, but we took our time, took a lot of water breaks and took a lot of photos and videos and generally had fun.”

Hewitt’s teenaged son, Gavin, and his friend Cole joined the quartet of runners for the first segment down to the Colorado River and then spent some time fly fishing before hiking back up.

Although Mackey said the moving time on his watch was about 10 hours, their overall time of 14 hours—about twice the amount of time that it took him the last time he ran the R2R2R in 2007. Back then, he set a new Fastest Known Time (FKT) in unsupported fashion and became the first runner to break the 7-hour barrier by taking down Kyle Skaggs’ year-old record of 7:37:00. (The Rim to Rim to Rim FKT has been lowered several times and is now held by Jim Walmsley, who ran it in 5:55:20 in 2016.)

Mackey’s not sure if any other amputee has ever covered the Rim to Rim to Rim endeavor that fast, but he wasn’t worried about setting any kind of record just setting a positive example. He set up the Grand Canyon run as a motivational fundraiser for ROMP, a Denver-based global non-profit organization dedicated to providing prosthetic care to amputees without access. He had intended to join a mountain climbing adventure in Ecuador in 2017 as a fundraising effort for ROMP, but he had to back out because of an infection in his leg.

To those who know him and run with him, Mackey is the same tough-as-nails athlete as he has ever been. He’s still the same hard-working, earnest and modest dude he’s ever been and he has the same thirst for endurance and adventure quests as he always has.

“I haven’t been super active in the amputee community, except for doing my thing and the races I compete in,” Mackey says. “Part of that is coming to terms with who I really am. I really am an amputee. I don’t really see myself that way, but coming to terms with my reality is also about being supportive of other athletes with disabilities.”

“I haven’t been super active in the amputee community, except for doing my thing and the races I compete in,” Mackey says. “Part of that is coming to terms with who I really am. I really am an amputee. I don’t really see myself that way, but coming to terms with my reality is also about being supportive of other athletes with disabilities.”

Mackey said he didn’t have any challenges with his Fillauer prosthetic running blade while running through the Grand Canyon, but he did take it off during two breaks to adjust it slightly for comfort.

Like most trail runners, Mackey didn’t enter any races in 2020 because of the Covid-19 pandemic. He admitted his training volume has been modest at best, logging several trail runs a week while also working full-time as a physician assistant and spending time with his family. He had been hoping to return to the Grand Canyon and run the R2R2R endeavor for more than a year and finally settled on a date with his friends about a month ago.

“I wasn’t fit enough for that distance, but it’s hard to get two-a-day workouts in like I used to,” he said. “The longest I had run since the Leadville 100 in 2019 is about 15 miles, so I knew it was going to be a challenge. But we all know what it takes to get through something like that and did what it took to get through it without any trouble.”

He finished second overall in 2014 a year before his accident and then returned in 2018 and 2019 and placed 12theach time while competing on a prosthetic leg.

Mackey is also signed up for Run Rabbit Run 100 in Steamboat Springs in September with the hopes of getting a qualifier for the Hardrock 100 lottery.

“People do a lot of crazy things and they don’t put it out there because they don’t really care about the attention as an amputee or as a disabled athlete, and I typically fall into that category,” he says. “I just kind of do my thing. People do crazy stuff and don’t really talk about it, but I would love to hear more about people doing those things because they’re super inspiring.”

As someone who has had the privilege of working with Veteran amputees, I am in awe of you courage & perseverance both as an athlete & health care professional.

Looking forward to meeting Dave at the Silver Rush 50 and LT100!