After months of planning, a group of friends set out from Denver on July 24, with the goal of reaching the Mount Evans summit 55 miles away 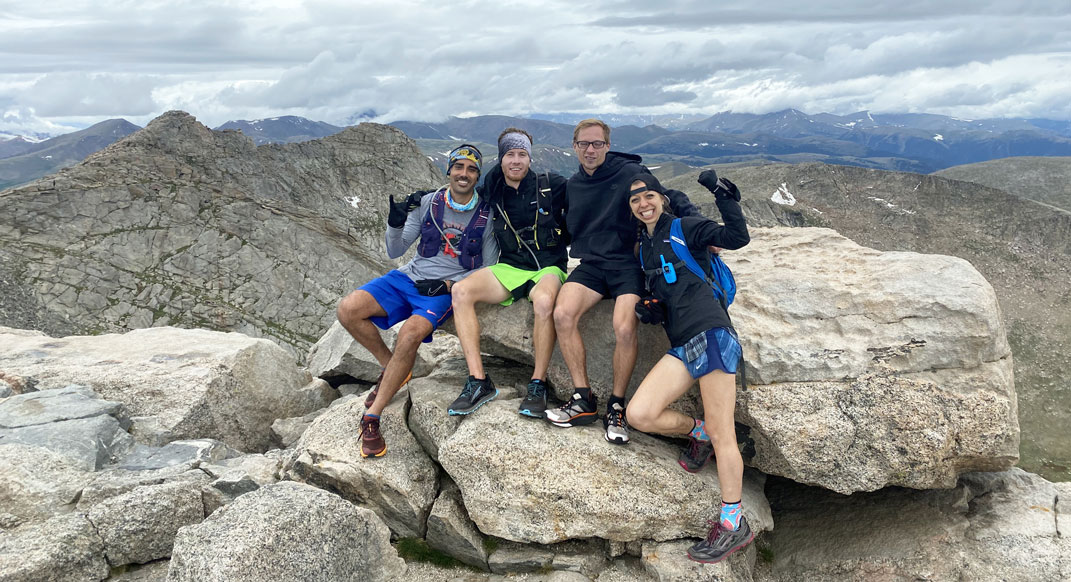 Victor Fallon, Trevar Hupf, Koltin Hammer and Meredith Merkley celebrate for a moment on the summit of Mount Evans.

A few weeks ago, Victor Fallon stood at the front door of his new townhouse in suburban Denver and realized the world was his oyster. And with a westward gaze from that spot, he made it a point to make Mount Evans his destination.

He can’t see the top of Mount Evans from his doorstep, but you usually can’t see the finish line when you start something. What made the 14,264-foot mountain so intriguing to Victor and a few of his running buddies is that it’s the closest of Colorado’s 14ers to the Denver area. That it was 55-plus miles away from his townhouse on the edge of the metropolitan area at an elevation of about 5,500 feet made it even more enticing.

As much as we all love to run our favorite trails and mountains from specific trailheads, sometimes thinking outside of the box can lead to extraordinary fun. I once rode my bike from Boulder to Denver, hopped on an Amtrak train to Winter Park, got off and ran 50 miles on trails back to Boulder.

Adventures are all around us, in all shapes and sizes, but it’s up to us to connect the dots. And with few races available amid the coronavirus pandemic, now is a great time to chase personal Fastest Known Times and other quirky adventures.

For Victor and his pals, knowing there was no direct route between Point A and Point B was the perfect reason to plan a crazy, self-contrived adventure.

“Yeah, that’s exactly what it was,” says Victor, a 32-year-old mechanical engineer, who designs air-conditioning systems. “We had run a lot of sections of the course beforehand, just to practice it. But it was still a big adventure.”

Like many trail runners with an adventurous mindset, Victor fell into trail running after running a few marathons on the roads. Then he paced a friend in a 50-mile trail race in Georgia and was immediately hooked on the vibe and the community of trail running.

Like many trail runners with an adventurous mindset, Victor fell into trail running after running a few marathons on the roads. Then he paced a friend in a 50-mile trail race in Georgia and was immediately hooked on the vibe and the community of trail running.

“Right away, I liked the culture of trail running so much better,” he says. “People were so friendly and the views were great. And I liked that the pace was so relative and that you can’t translate one race to another. They’re all unique.”

And like any ultra-distance race, self-contrived adventures that require support and companions are all about community. Crazy stuff can happen out there, but the point is that you endure it together.

After a few months of planning, Victor and his friends Koltin Hammer, Matthew Brand, Joe Sposato and Ben Bates set out at about noon on Friday, July 24, with the goal of reaching the Mount Evans summit early the next morning. Starting in the scorching, 85-degree heat wasn’t ideal, but they knew they’d need to be off the peak before typical early afternoon thunderstorms rolled in the next day.

From Victor’s townhouse, they followed a well-planned route that zig-zagged along a few suburban streets and through parks and trail systems as they made their way into the foothills. Although the goal was to do as little climbing as possible to save their legs, there were plenty of hills and smaller peaks along the course—including Mount Morrison (7,881 feet), which offered the first real glimpse at Mount Evans.

Along the way, they were met by other friends, including Trevar Hupf, Meredith Merkley and Laura Cortez, who joined for significant parts of the run and also set up impromptu aid stations where everyone could refill hydration packs, consume calories and change clothes.

By early evening, Victor and friends had made their way through the small town of Evergreen, connected a few more trail systems and also endured several hours of rain and colder temperatures. Their determination toward their shared goal and collective camaraderie, as well as Trevar’s precise navigation work, a lot of hits of Trail Butter and plenty of laughs, kept them moving, even if they were slower than expected as they climbed in elevation.

Their determination toward their shared goal and collective camaraderie, as well as Trevar’s precise navigation work, a lot of hits of Trail Butter and plenty of laughs, kept them moving, even if they were slower than expected as they climbed in elevation.

They finally reached the Mount Evans Wilderness area amid temperatures in the lower 40s early on Saturday morning to begin the final 2,000 foot ascent to the peak. When they arrived at the Summit Lake at about 13,000 feet, they met Meredith, who had run up the closed road from Echo Lake to join for the final push to the summit. At that point, Ben was cooked and opted to run the 12 or so miles down the road to Echo Lake, where other friends were waiting in their warm cars.

From Summit Lake, Victor, Koltin, Trevar and Meredith ran up Mount Evans Road to the summit, which they reached at about 9 a.m., roughly 95K (approximately 59 miles) of running from the doorstep of Victor’s townhouse.

After a few photos on top, Victor, Koltin, Trevar and Meredith descended the Mount Evans Ridge Trail and the Chicago Lakes Trail to Echo Lake parking lot, where they shared high-fives and hugs with the rest of their crew, ate some food and drank a few beers. After about 25 hours and roughly 115km (71 miles) on feet, it was a mission accomplished.

Of the original group that started, Koltin was the only one to run the entire way with Victor, but everyone played a significant part of the adventure and ran between 40K (24 miles) and 100K (62 miles) along the way.

“It was so much fun and really a huge undertaking,” Cortez says. “They did a really great job of planning it out. It was a long 25 hours for everyone, but that’s part of what made it so fun.”

It’s definitely something you can’t do on your own. Or if you did, it would take twice as long as you might die. It was an awesome group effort.

The next day, they met at a pub in Golden to relive the adventure, share photos, laugh about a few mistakes and remember the agonizing parts while toasting a few beers. (They later made a storytelling video of the adventure called Maison a Montagne, which is French for “Home to Mountain.”)

“It was a lot of fun to relive it,” Victor says. “I couldn’t have done it without my friends, both the people who ran and the ones that met me with food and support. It’s definitely something you can’t do on your own. Or if you did, it would take twice as long as you might die. It was an awesome group effort. I really can’t thank everyone enough.”

Brian Metzler was the founding editor of Trail Runner and is currently a contributing editor.

victor is the best!!!! one of the most kind and welcoming members of the trail running community. i’m grateful to have spent some time with him back in georgia. wahoo!

Agreed! Great man all around!