Trail Stoke: Why The Early Wake Up Is Always Worth It

Why waking up just a bit earlier helps you live more. 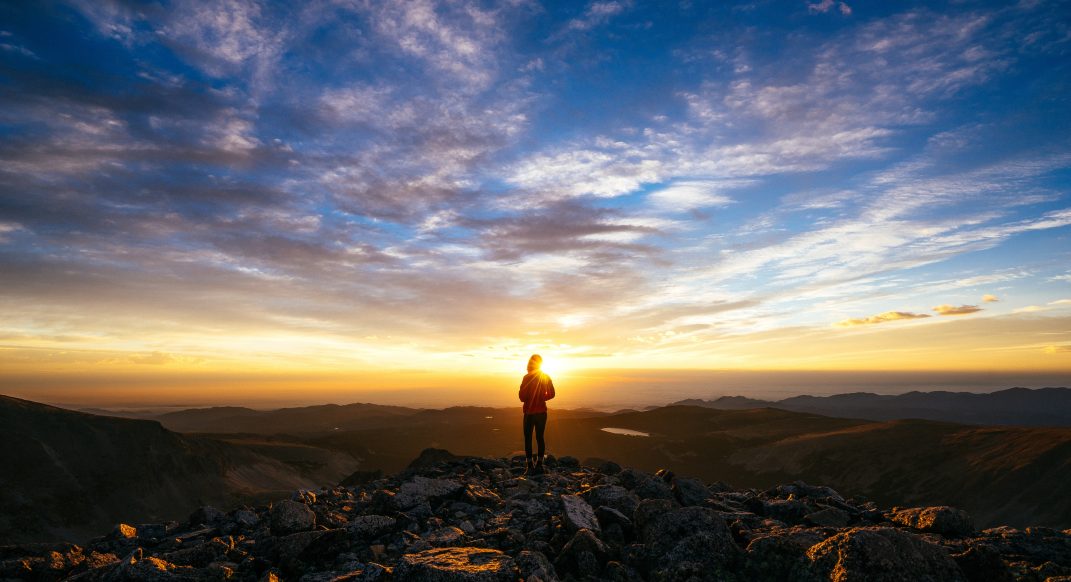 The alarm on my phone is set to that incessant, blaring “Alarm” sound and it always annoys me when it goes off, but it always wakes me up.

(If you don’t know the sound, look it up in your iPhone iOS under the “Classic” sounds and you’ll know what I mean by being annoyed.)

I picked up my phone in the dark, saw that it was 4:30 a.m. and fumbled to turn off that horrible noise. Once successful, I opened my weather app to check the temperature in Leadville.

The night before, I ambitiously planned a dawn patrol excursion up and down Mt. Elbert, Colorado’s highest peak at 14,433 feet. For such a big peak, it’s a relatively easy “get” if you’re crashing or camping in or around Leadville or Twin Lakes. That is, if you’re willing to wake up an hour or two early to live an hour or two more.

It seems like a simple concept, but that’s often the key to adding one or two extraordinary trail running experiences every week. While the challenges of the mountains or trails are real, the real crux is sometimes answering the simple question: Are you willing?

The morning in question was kind of a combination of several or those things for me. I had a lot of work to do, I was tired and, yup, it was frigid outside.

Two days earlier, I had planned a different trail run with the hopes of seeing the sun rise and linking several other high peaks. But when I woke that morning, it was 21 degrees and I wimped out, opting instead to wait until the sun appeared and warmed everything up. I eventually got out there and rambled around on a fun and rigorous 10-mile route, but it seemed anticlimactic because the sun was high in the sky and, quite frankly, it seemed like a rather average day.

I had inadvertently dozed off, but, fortunately, my back-up “safety” alarm woke me up at 4:33 a.m. and I was immediately struck at how disappointed I was to get a late start two days earlier. Would I once again give in to sleepiness and again miss the opportunity for a truly special morning? Or would I seize the moment and make it happen?

“Fool me once, shame on you, but fool me twice, shame on me,” I thought to myself, even though it was only me in that conversation.

Time to rise and grind! If I wanted to catch the sunrise somewhere above tree line, I had to grab the pack I organized the night before, get dressed and get out the door.

Within 20 minutes, I was driving out of town in the dark to Half Moon Road, gnawing on a Clif Bar, pounding a 5 Hour Energy and chasing it all with a few gulps of water. Soon I was at the dark and quiet trailhead for the northeast approach of Mt. Elbert.

After hopping out of my truck, I slung my back on my back, cinched up the laces of my Hoka Speedgoat 4s and hit the trail. From there, it was pure joy. Yes, I was tired, it was cold, the trail got steep in a hurry and it’s hard to breathe at high elevations, but the idea of chugging through the forest behind the beam of my headlamp before the rest of the world was awake was thoroughly invigorating.

As I meandered higher and higher along the trail and finally got close to tree line, I sensed the morning’s first light starting to brighten my surroundings. I stopped briefly to snap a pic as an orange glow became visible on the eastern horizon line behind me, but I knew the best was yet to come so I kept running.

I passed a foursome of young hikers who marveled aloud that I was running, just as I quietly marveled inside at how early they must have started to be that far along the trail. I wondered briefly if they battled the same early morning dilemmas I did, though it really didn’t matter because at that point I was stoked to be moving well and feeling so good.

After 20 more minutes of running, it had gotten noticeably lighter and I crested 13,000 feet. At some point, I looked back and saw a tiny yellow-orange dot appear above the horizon and was instantly filled with a burst of energy. I have said many times, nothing compares to seeing the sun rise on a morning trail run. I soon started to feel a bit of warmth, and that proved to be extra motivation in my final slog to the summit.

I continued on my way up the mountain on the steepest sections of the trail, despite cold wind whipping around my face. Behind me, the sun was fully up and the day had officially begun. Ahead of me, there was the solitary peak, a lone summit with no one around. After one final incline, I literally pranced the final few yards to the top, soaked in the scenery and relished that I had seized the day.

It’s so hard when that alarm goes off and its dark and cold, but never once have I regretted getting up and getting at it!

The best part of the day – almost like having the world to yourself!

Great story and I can see the images in my mind’s eye. Tomorrow I head up Hillsboro Peak in New Mexico.

Like anyone training for a trail ultra-marathon, there are numerous long/hilly runs on remote trails. Training for a December race I often started before sunrise and, one particularly chilly morning, got to the top of a rocky crag just as the first sunbeams arrived. I stopped dead in my tracks and stared into the sun, feeling – in my core – the intense energy from so far away. It sounds corny but I felt so blessed at that moment that I decided to make it a ritual to stop for a moment of reflection and appreciation at my first glimpse of the sun each run. I can’t explain it but on several days, the beauty and serenity of my surroundings almost brought me to tears and I continue this tradition to this day. Thanks for your write up Brian.

Ilona A.
Reply to  Charlie Tillett

I have to say that 18C is hot for me ! Being from Canada our morning temperatures even in summer are below 20C.
But sunrise are very impressive. We had a wave of hot weather in summer so it was too hot for me to hike / run after work in 35C. A friend of mine showed me picks form his sunrise hikes …. and I was hooked . So for the most of August I was up at 6 and hiking / running for the sunrise then doing the 10-15 K daily routine.
Not sure how would 4:39 AM sound …😁
Big cheer for you, early riser, and happy hiking/ running.

rockies
Reply to  Ilona A.

Umm.. not sure if you were joking but I’m pretty sure Brian is referring to 18 degrees Fahrenheit.

I would love recommendations from other runners about how to stay safe on the trails in the early morning hours before sunrise. I’m eager to get out that early but fear of being out alone on the trail in the dark means I don’t usually get out until much later. Thanks in advance for any advice on this!

Kind of depends on the scope of your trail endeavor at sunrise, but here are some thoughts. 1, Go with a friend and leave notice with someone else where you’re going. 2. Know where you’re going, study a map, take a phone and digital (gpx) maps. 3. Have a proper headlamp that really lights up the trail. (Make sure it’s charged or has good batteries, too!) 4. Have the right footwear for the trail. Nothing worse than having the wrong shoes for the terrain while you’re running in the dark and shadows. 5. Know how to react when you come in contact with various forms of wildlife. 6. Don’t make risky moves (scrambling ridges, creek hoping) in the dark if you can avoid it. 7. Always take proper hydration, extra calories. 8. Have fun, be safe.