Vic Thasiah has rallied runners to save the environment. 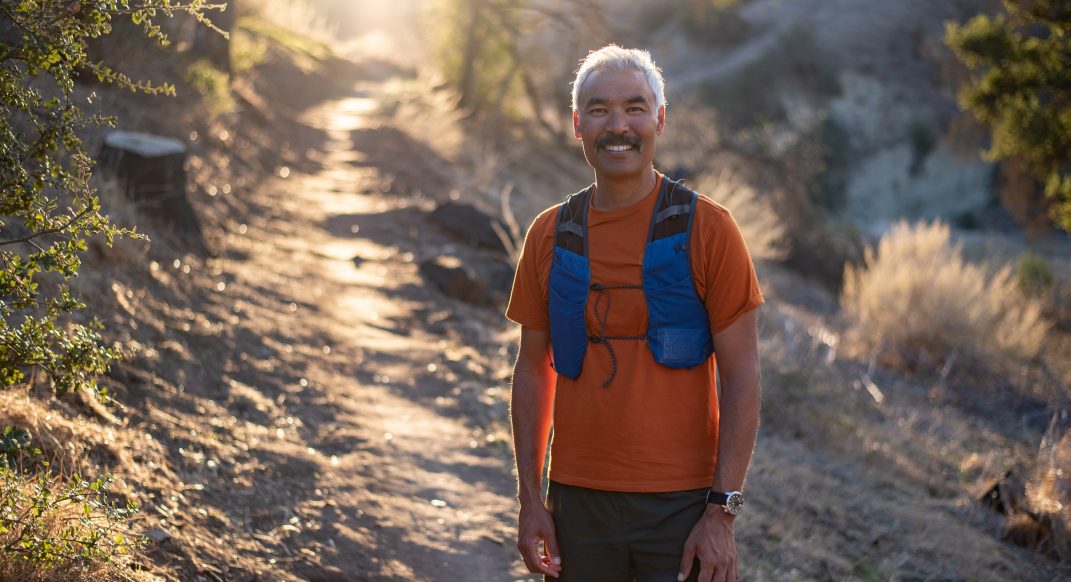 When he was growing up in Fresno, California, Vic Thasiah remembers when the Sierras were shrouded by pollution and he could smell pesticides drifting from nearby agricultural fields. He accepted the routine of staying inside when the air-quality index reached unhealthy levels and vigorous exercise was not recommended.

Looking back, he says it shouldn’t have been normal for children to monitor their play based on air quality and has since dedicated himself to educating runners about environmental issues and expanding access to the sport of running.

Thasiah is a 49-year-old father to two girls, trail runner, professor of religious studies and environmental studies at California Lutheran University and Executive Director of the non-profit, Runners for Public Lands (RPL). When he talks about the places he runs around his home in Ventura, California, he describes alluring mountain vistas, oceans and forests.

Often, Thasiah prefers to run by himself, with a small notepad in his running vest. He rests on rocks to write about the plants, animals and changes he is seeing. But he’s not really alone. Thasiah is acutely aware that the wildlife on the trails is aware of him and that he’s running on living soil.

“Some people run because they want to be in solitude,” says Thasiah. “But the irony is that you’re actually around way more life when you’re running than you are in your built environment.”

Over the past 10 or so years, volunteering for stewardship and conservation projects, Thasiah has been connected with active environmentalists. He also socialized with trail runners through running clubs and races, but realized the two groups rarely overlapped, even though they shared many values.

He discovered national organizations for hikers, bikers, paddlers, hunters, anglers and climbers, but none for runners. So, in 2019, Thasiah founded RPL, a nonprofit organization focused on connecting runners to environmental justice, advocacy and stewardship.

“I’ve talked to thousands of runners, and there’s been no hesitation in the idea that we have a responsibility to protect the very places we love,” says Thasiah.

RPL launched on Earth Day, April 20, 2019, with an event that combined trail running and habitat restoration in Harmon Canyon, a new trail system with direct access from Ventura.

“He’s humble,” Laura Ochoa, one of RPL’s co-presidents says about the work Thasiah puts into the organization. “It’s always we, it’s never I. And you would never know how hard he works.”

As a religion professor, Thasiah studies indigenous religion and culture, and their traditions around long-distance running. He was motivated by watching today’s indigenous people run to respond to threats to water and land around the Dakota Access Pipeline and Bears Ears National Monument. Thasiah took direction from indigenous peoples, who have used running as resistance, to send his own message.

On July 25, Thasiah and two other RPL members ran 40 miles across California’s Sespe Wilderness, ending at Pine Mountain to bring attention to thinning plans on Pine Mountain, an ancient chaparral and old-growth forest in the Los Padres National Forest. Given the area’s sacred significance to the local Chumash people, its high recreational value and its distance from human communities posing little fire threat, RPL wanted to raise awareness about the logging threat.

Participants in the virtual event, called “Forty for the Forest,” contributed to more than 12,000 comments to the U.S. Forest Service to do an environmental review of the potential impact to the forest and ran 40 miles over three weeks wherever they lived. The funds to participate in the virtual run were turned over to the Pine Mountain Defense Fund to pursue environmental assessment, as well as a legal defense fund to protect the forest.

“Running to raise awareness is a formidable form of resistance that can attract a lot of attention and can inspire a lot of people,” says Thasiah.

Along with advocating for environmental justice, RPL has been proactive about expanding access to trail running and public lands as well as protecting cultural history.

Laura Ochoa joined because she wanted to be more influential in the running community and see more of her community accessing the outdoors.

“My environmental awareness has been expanded, and I’m working to help educate,” Ochoa says. “Still, you can educate all you want, but if you don’t bring minority groups to the trails, they’re not going to know what they’re trying to protect.”

RPL’s board has been deeply involved in doing Diversity Equity and Inclusion work to address biases. They’re also focusing on expanding the local community that both runs and advocates for the environment to include the Latino population, which makes up half of Ventura County’s population, by inviting youths to participate in stewardship projects. Thasiah has made it clear that engaging in environmental justice is a cornerstone to protecting the natural world.

“I believe, and the people I work with really believe, that you have to care about not only endangered species or forests and rivers,” Thasiah says. “First and foremost we need to care about the day-to-day pollution that is environmental and public health-related.”

The Trails Are Alive

Runners make up the biggest outdoor recreational group in the U.S. with 57.8 million participants, according to the 2019 Outdoor Industry Association report. They also get out more frequently than most other recreators, which means they observe the changes in the landscape more intimately and consistently and are invested in the condition of trails and surrounding habitat.

Thasiah reasons that the frequency at which runners interface with the natural world is a strong incentive for wanting to protect it and learn more about it. RPL boosts the environmental literacy of runners by inviting environmental stewards to address runners about the issues facing places they already run. They host events where naturalists identify native plants and participants help remove invasive ones.

Ultimately Thasiah hopes that RPL can help grow into a larger organization to boost the environmental literacy and participation in environmental advocacy of runners nationally.

“The more you know, the more your love has power,” Thasiah says about environmental education. “That’s what it’s going to take to protect more and more places.”

Brooke Warren is a writer, photojournalist and mountain guide who is grateful to be able to access public lands each day. When not outside, she can be found doing jigsaw puzzles or puzzling together short films.