You Should Thrift More Gear

Second-hand gear is easier on the planet, and on your wallet. 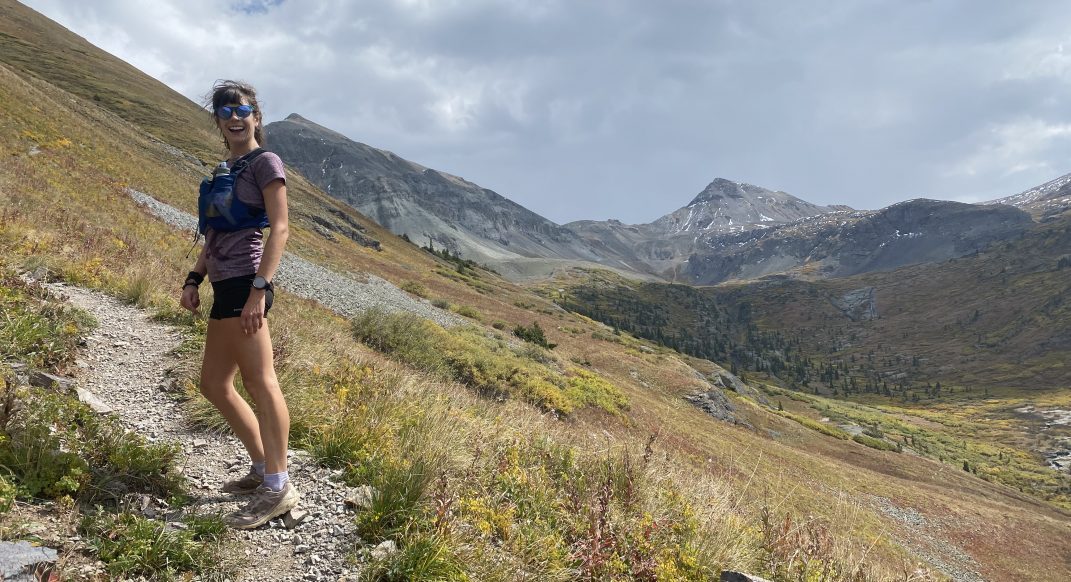 The author running in second-hand gear (but new shoes!) near Telluride, CO.

This time of year, countless gift guides and mega sales are hitting your inbox, attempting to ply you into buying yet another shiny new puffy coat or windbreaker.

When we think about gear, be it shirts or sleeping bags or shoes, we should remember the Three R’s: Reduce, reuse, recycle. Our priority should be to reduce the amount of gear that gets made, contributing to environmental degradation. The second goal should be to reuse that gear, which is where buying used gear comes in. You can also help lengthen the lifespan of your gear by buying quality gear in the first place (something we always try to do in our reviews), and keeping your used gear out of landfills for as long as possible by giving it to other runners, selling it, or repairing it. The last option should be recycling it (and there should be no options after that).

Many running stores have bins where you can recycle worn-out running shoes. If your local store doesn’t already have one, you can help them partner with TerraCycle to start a recycling program! Nike stores also accept footwear through their Reuse-A-Shoe program.

Over 10 percent of global carbon emissions come from the apparel industry, which is more than all international flights and maritime shipping combined. The average American produces more than 77 pounds of textile waste per year, which takes up a not-insignificant chunk of our nation’s landfills.

It’s also bad for water. Most of those textiles, particularly athletic clothing, contains polyester, a plastic (fossil-fuel byproduct) that releases two to three times more carbon emissions than cotton, and doesn’t break down in the oceans. Polyester production for textiles released about 706 billion kg (1.5 trillion pounds) of greenhouse gases in 2015, the equivalent of 185 coal-fired power plants’ annual emissions.

In many countries that produce garments, untreated wastewaters from textile factories are dumped right into rivers, and can carry toxic substances like lead, mercury and arsenic. This is not only harmful for wildlife, but also for the millions of people who live near and depend on those waterways.

Aside from choosing clothes and gear made in countries with stricter environmental regulations, like the EU, Canada and U.S., you can keep clothing out of landfills and reduce your environmental impact by buying used.

You don’t need to eschew all comforts to make an impact, but the more action we take as individuals (while also demanding that gear and apparel companies conform to stricter environmental standards, and holding our government accountable for raising those standards) the better off we’ll all be.

Though I’m a professional gear tester, who has put pretty much all the latest and greatest and techiest gear through the ringer in my day job, most of the gear that I rely on for my biggest adventures is used or secondhand. While gear companies are eternally touting cutting edge technologies to wick sweat and tape seams, the best gear I’ve used is also some of the oldest.

The habit started when I was a broke graduate student living in Boulder, and I started perusing thrift-shops and garage sales, looking for second-hand ice tools and running shoes. The average Boulder lawn rummage rivals some better suburban REI’s, and I was amazed at the quantity and quality of gear I was able to purchase.

I’ve gotten everything from shorts to shells to hydration packs second hand. I’ve purchased basically new base-layers and vintage fleece. The internet has everything.

Ignore the marketing hype. Ignore the holiday rush. These are fabrications from an industry that thrives on you feeling like you need the best new shoe or the lightest jacket to excel. There is no single shirt or shell or pair of shorts that you need to run better or travel lighter. So you might as well buy it used.

A lot of times the best gear out there is the gear you or someone else already has. And the more times we can circulate those things (reduce, reuse!) the better. While it can be obnoxious to try to find the exact thing you want in your exact size and preferred color, easy consumerism is exactly what got us into this mess in the first place. The more mindful we are about our consumption habits, the better.

Where To Find Used Gear

As second-hand apparel and gear become more mainstream, it’s more accessible online than ever. You can get used gear at REI, and Patagonia’s Worn Wear lets you mail in old togs in exchange for store credit. Geartrade also has an amazing selection of outdoor-oriented products and apparel. Facebook marketplace in and around mountain towns and outdoor hubs is also a great resource, with the added benefit that you can usually pick stuff up in person rather than paying to have it shipped (again, reducing emissions).

Though Poshmark isn’t specifically outdoor-oriented, I’ve scored some sweet deals on great running apparel there. I even have an Ebay alert, just in case my favorite pair of road runners ever surfaces.

Not only is it more sustainable, it’s also significantly more affordable and even fun. Where else am I going to get a neon green ski shell from the Spring 86 Collection?

Maybe don’t buy shoes secondhand. The same goes for socks. The intent of this article is to make you curious about ways to reduce your environmental impact, not necessarily to encourage a wholesale rejection of consumption (though, hey, if you’re into it, by all means, please do). By reducing the overall impact produced by the rest of my closet, I rest a little easier when I can’t opt out of the gear-industrial complex.

The idea is that every little bit counts, and when it comes to the apparel industry, we have a long way to go. Though we’re never going to thrift our way out of the environmental crisis, I love rocking my second-hand style while holding our government and corporations to account.

Zoë Rom is Associate Editor at Trail Runner, and has a master’s degree in Environmental Journalism from the University of Colorado Boulder, and is a bit of a thrift-aholic.

Thanks for this article. This is super helpful. I had no idea REI had a used section. I need to think more about buying used!I feel I’m pretty good at reducing and wear all my gear until it’s in shreds. Also use old running shoes that are too worn to run in as walking shoes. But could definitely but more things that are used! There again for trying to create more awareness

Part of me is in full support: using secondhand material and recycling old shoes; but the other part wants nothing to do with a running shirt or shorts someone elese has sweat A LOT in. I know the state of my own clothes, and I would really only consider recycling a backpack or maybe a jacket.

I love this! Buying used is very under-rated, and I fully support it whenever you can! Another point I want to emphasize: it is SUPER common to find gear that is “used,” but may only have been worn once, or never! People buy things thinking it will inspire them to exercise more, but like you said no piece of gear really makes you a better athlete. So even if someone else’s sweat grosses you out (it doesn’t bother me at all, I just wash it ☺️) you can often find PERFECT condition items for a fraction of the price, and a fraction of the environmental impact. It’s win, win, win!

REI garage sales are my favorite. I always go there first.

LOVE THIS!! Thanks Zoe. Patagonia’s Worn Wear is so incredible. Top notch gear on it’s second life! And they only sell “good” items, so nothing that smells permanently or has any functional deformities. 🙂

After losing 60lbs this year, I needed basically a whole new wardrobe. Buying used, QUALITY products was the route I chose. Better for mother earth, as well as my pocket book. I’ve found brand new and gently used gear from Icebreaker, Arcteryx, Patagonia, Janji, etc.. on Mercari for a fraction of the price. I also love REI used gear and now shop their “constant in store garage sale” frequently.

I’m disappointed by the high prices from REI and Patagonia for their used stuff. I can get better prices on new stuff that is on sale, especially clearance items..