Back to the Ice Age (Trail) 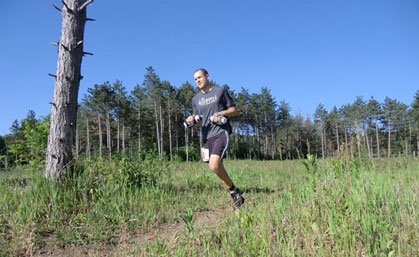 On Saturday, June 2, Trey Robinson of Gurnee, Illinois, won the Kettle Morraine 100-Mile in Eagle, Wisconsin, crossing the line in 18:33:07, just under seven minutes ahead of runner-up (and master’s division winner) Josh Miller of Dubuque, Iowa (18:40:05). Rob Houghton of Murphys, California, was third overall (and first in the senior master’s division) in 19:03:18.

Fourth overall was women’s race winner Becky George of Baxter, Minnesota, who finished in 19:12:43, over two hours ahead of runner-up Alisha Damrow of Menasha, Wisconsin, who clocked a 21:14:15 and finished 12th overall. Emily Bello of Newport, Kentucky, finished third (16th overall) in 22:08:03.

The Kettle Moraine 100 Endurance Runs, as the races are collectively known, were founded in 1996 and have occasionally drawn top talent to eastern Wisconsin–former Comrades Marathon winner Kami Semick owns the 100K course record of 9:45:13, set in 2005, and 2010 Badwater 135-mile and 2011 Javelina Jundred 100K champ Zach Gingerich set the 100-mile course record of 15:51:09.

George says she was on pace to break Donna Perkins’ 100-mile course record of 18:12:30, which has stood since 1998, but that she was slowed by a technical section in the second half.

“The cool thing was that I was way back in the pack early on, but I ended up passing a ton of people after mile 30 or so, probably over a hundred, by the time we hit the turnaround,” says George. “At mile 24, I saw my kids on the side and they were like ‘mom, you’re almost in last place!’ And I said, ‘You just watch!’”

She said she hopes to return to the course next year and go for the record.

Most of the race is run through Kettle Moraine State Forest on the Ice Age Trail, a National Scenic Trail that traverses over 1000 winding miles between Wisconsin’s eastern and western borders, minus a few unconnected pieces.

“The course was part open fields, part in the woods,” says George. “It had roller-coaster hills, short ups and downs where you could actually run most of them instead of walking. And the trails were perfect–there were no potholes, and not many roots or rocks.”

The trail hosts several other trail races, including the Ice Age 50 in May, which is run in nearly the same spot as the Kettle 100 runs, launching from nearby La Grange. This year’s Ice Age 50 was part of the Montrail Ultra Cup and drew an elite field, but local runner Zach Bitter bested the group that included Timothy Olson and Michael Arnstein, among others, in the course’s second-fastest time ever (Scott Jurek ran what is now the ninth-fastest time at Ice Age when he was 24).

The Ice Age trail also hosts the Glacial Trail 50-Mile and 50K in Greenbush, outside Milwaukee, in October, as well as the Chippewa 50K and 10K outside Eau Claire, in the western part of the state, in April.

More information on the Ice Age Trail can be found here. 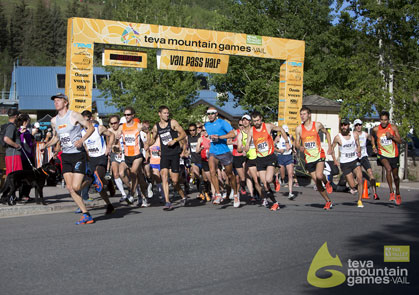 Former NCAA cross-country ski champ Glenn Randall won the race overall in 1:23:23. Randall, of Mesa, Colorado, finished over a minute ahead of Josh Eberly, of Gunnison, Colorado, and Jason Delaney, of Golden, Colorado, who finished second and third, respectively, in 1:24:37 and 1:24:55.

Jacob Loverich of State College, Pennsylvania, won the latest installment of the La Sportiva Mountain Cup, completing the 30K course in 2:39:02. He finished over three and a half minutes ahead of runner-up Jason Bryant of Elkin, North Carolina, who clocked a 2:42:33. Stephen Hennigar of Rye, New Hampshire, finished third over 10 minutes back in 2:52:47.

Megan Kimmel of Silverton, Colorado, won the women’s division in 3:01:17, good for 6th overall. She was over 18 minutes ahead of her nearest competitor, Ashley Moyer of Oley, Pennsylvania, who finished 21st overall in 3:19:53. Gina Lucrezi of Carbondale, Colorado, finished third (23rd overall) in 3:22:53.

The next installment of the La Sportiva Mountain Cup is the Barr Mountain Trail Race, July 15th in Manitou Springs, Colorado. Cup standings can be found here.

Jordan McDougal of Warrenton, Virginia, won the 50-mile at the TNF Mid-Atlantic Regional in Washington, DC, Saturday, June 2. His time of 6:46:42 saw the former Liberty University standout finish nearly 14 minutes ahead of runner up Jake Reed of Lynchburg, Virginia, who clocked a 7:00:08. Keith Levasseur of Columbia, Maryland, was third in 7:15:33.

Complete results, as well as results for the 50K, half-marathon, 10K and 5K races can be found here.

Justin Ricks of Pueblo West, Colorado, and Ryan Burch, of Fort Collins, Colorado, both dipped under the course record at the Golden Gate Dirty Thirty 50K in Blackhawk, Colorado. Ricks won the race in 4:47:14 and Burch finished in 4:48:14, ahead of Joe Grant’s record of 4:49:59, set last year. Jim Rebenack of Arcata, California, was third in 4:50:24, now the fourth-fastest performance ever on the course.

In the women’s race, Kerrie Bruxvoort of Broomfield, Colorado, won in 5:27:16, good for 11th overall and second all-time on the course-record list. Bruxvoort was over 23 minutes ahead of her nearest competitor, Helen Cospolich of Breckenridge, Colorado, who finished 23rd overall in 5:50:45. Krissy Moehl of Boulder, finished third (29th overall) in 6:00:23.

Complete results, as well as results for the 12- and seven-mile races, can be found here.