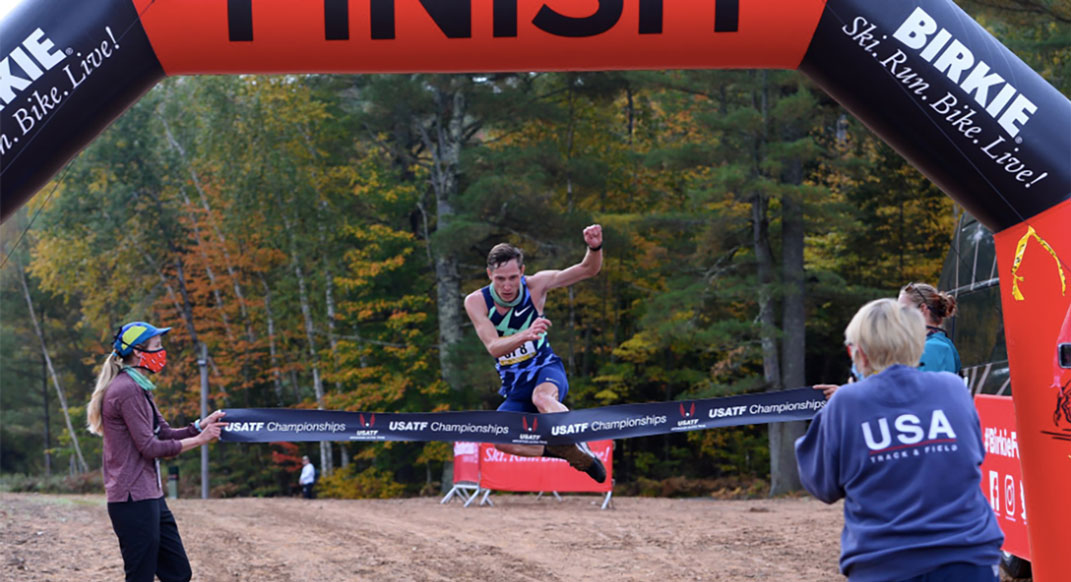 Andy Wacker has had a rather, um, wacky year of trail running.

And, OK, yes, we have all had a bizarre and challenging year, running or otherwise.

With potentially just one race left on his schedule, Wacker, one of the sport’s most prolific racers, has achieved quite a bit since the COVID-19 pandemic shut the world down, but he had to work hard for it.

With potentially just one race left on his schedule, Wacker, one of the sport’s most prolific racers, has achieved quite a bit since the COVID-19 pandemic shut the world down, but he had to work hard for it.

He wound up entering five races—probably more than most U.S. runners—while also attempting several Fastest Known Time (FKT) efforts and also suffering the cancellation of several of what would have been his biggest events of the year. For a guy who has raced throughout the U.S. and all over the world in recent years, the only time he has left Colorado since the spring has been for the USATF Half Marathon Trail Championships on September 26 in Cable, Wisconsin.

Still, Wacker’s competitive fire and diligent training has allowed his makeshift season of racing to yield a modest amount of success, resulting in eight new FKTs, a solid third-place finish in the Pikes Peak Marathon on August 23 in Manitou Springs, Colorado, and his second USATF Half Marathon Trail title to go with his first one four years ago.

OK, the championship race didn’t have the deepest of fields—Wacker won by nearly five minutes in 1:13:55 and women’s champion Dani Moreno was third overall in 1:21:28—but a race is a race and the Berkie Trail Run crew did a stellar job to make it happen. (There were 207 finishers in the half, plus about 250 more runners in several other race distances the same day. And given that the COVID-19 pandemic is still gripping the U.S., no one is complaining.)

Wacker got COVID-19 tests prior to traveling and once he returned, both times they came back negative.

“It was great to get out and run hard in a race setting,” Wacker says. “Your experience doesn’t change for the race, which is great, but they did a lot of things to make sure it was safe. They did a great job of handling it all.”

Indeed. The fact that the U.S. half-marathon trail championship happened at all—it had been exactly six months since the previous U.S. trail-running title race when the 50-mile championship was held on March 26 at the Pioneer Spirit race in Auburn, California—is a huge credit to the Birkie Trail Run organizers that had worked hard all summer to create a modified race environment to match federal, state and local health and safety guidelines.

That included drive-through packet pick up the day before the race, mandatory masks before and after the race, a modified, staggered start and no prolonged awards ceremony or post-race party.

That included drive-through packet pick up the day before the race, mandatory masks before and after the race, a modified, staggered start and no prolonged awards ceremony or post-race party. It also meant removing all of the singletrack sections of the course to reduce close interactions with other runners. One positive unique wrinkle for the championship race was that the women’s elite field started two minutes in front of the men’s, something that Wacker used as motivation to begin his race fast.

“It’s been a crazy year, so it was nice to see the Half-Marathon Championship come off as well as it did,” says Nancy Hobbs, the chairperson of the USATF Mountain Ultra Trail Council and executive director of the American Trail Running Association. “It was just beautiful there, in the peak of fall colors.”

He had helped the U.S. men’s team place second in the world in 2019 and first in 2016. Unfortunately, both the U.S. and world championship races were canceled this year, forcing Wacker to pivot to utilize his fitness. (Oddly, Wacker might not have been able to go even if he had qualified, given the travel restrictions on U.S. citizens, but his wife, Karley Rempel, an accomplished trail runner with U.S. and Canadian citizenship, might have had she not been injured.)

In the spring, Wacker set a new 50K personal best of 2:53:45 in a time-trial wearing training shoes on the dirt roads in Boulder back in May, then focused on going after several FKTs. He set eight during a five-week span between July 24 and Sept. 1, with the most notable one probably being his 1:51 effort for the 14.5-mile High Lonesome Loop with 3,300 feet of vertical gain in the Indian Peaks Wilderness Area west of Boulder. His 5-hour, 3-minute sojourn on the 17-mile Mummy Range with 7,000 feet of vert in Rocky Mountain National Park is also impressive. (He also came up short in five other attempts, including the epic 27-mile Four Pass Loop near Aspen two weeks before he flew to Wisconsin.)

Won the Vail hill climb today! Happy Fourth of July 🎇🇺🇸🥇 Great work by @vailrecdistrict keeping everyone safe. 😷 First “trail” race of the year, and going up a mountain still hurts. 🏃 Cool to have an fast up/ down mountain race 🏔 format this year! #niketrail #mountainrunning #usa

“It’s been really hard,” says Wacker, who turned 32 recently. “It’s just hard because there are so many good years in an athlete’s career and you want to prepare yourself for racing. I was pretty fit in the spring and I was able to go for some FKTs and those were good ways to keep me fulfilled, because I am really goal-oriented. But it’s really hard having no world championships and not many big competitions.”

Wacker says he’s looking forward to the trail-marathon championships in Moab, a race he probably wouldn’t have been able to do had he been racing at the World Mountain Running Championships. After that, he’s not sure what’s next, given the unknown still facing the running world because of COVID-19.

“That long-term unknown is pretty hard,” Wacker admits. “I’m already trying to come up with goals and ways to challenge myself to keep myself productive. I’m one of those guys who can’t just sit around. I like to race a lot.”