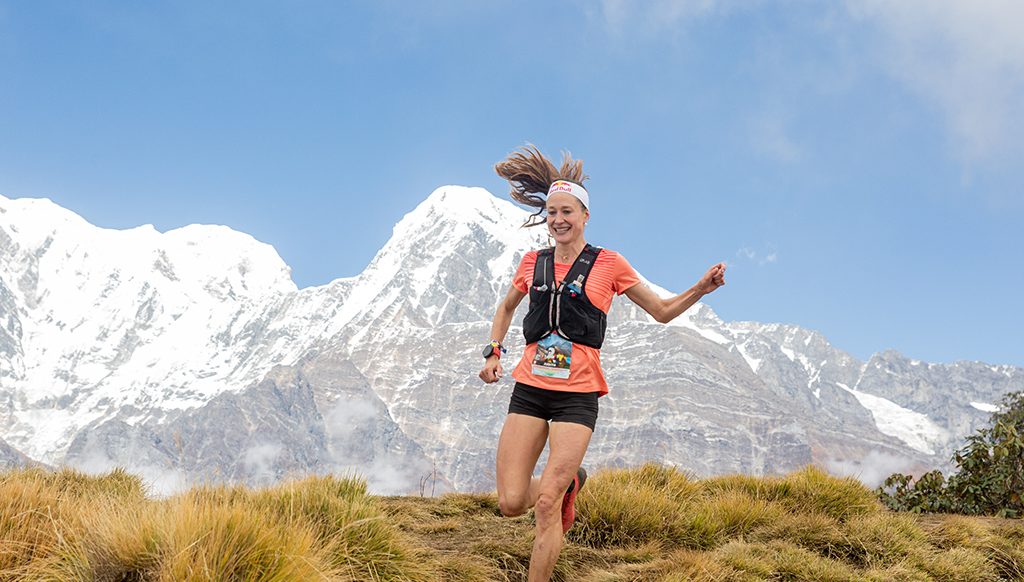 The final for the Golden Trail Series (GTS) took place this week in the mountains of Nepal. The final is the culmination of the Golden Trail Series season. The season consisted of six international races, each giving athletes the possibility to qualify for the final. The series is a newer event on the international trail running scene, bringing together some of the most technical, fast and challenging races in the world. To qualify for the GTS final athletes combine their top three race performances to compete for one of the ten coveted finalist positions.

This year the final took place at the feet of the Annapurna mountain range in Nepal. The 42km race began at 3,700 feet climbing to a leg-burning 12,000ft, finishing with a technical, fast downhill back to the starting elevation.

Kilian Jornet—the obvious race favorite—qualified in first place for the GTS, winning the Pikes Peak marathon, the famous Spanish Zegama and Sierre Zinal in Switzerland. Kilian began the climb with a blistering pace, quickly forming a breakaway with Davide Magnini—the third-place qualifier from Italy. As the two runners hit the high point and began the long descent, Kilian set a blistering pace, cementing a decisive lead for the Spaniard. Davide remembered, “When I got to the top with Kilian I was so happy, and on the downhill, I knew he was two times faster than me, so I let him go and just tried to manage my energy for the rest of the race.”

At the finish, to the surprise of many, a local Nepali favorite—Bhim Gurung—emerged from the forest ahead of Kilian, only to discover he had taken a wrong turn, skipping the final 2 miles. Gurung was still able to finish the race, backtracking and adding 5 miles to his race and managing to finish in the top 10.

Kilian finished the race with a time of 4:46.05, leading the race from the turnaround point and creating a dominating lead. “It went well, I didn’t really know what to expect. It started well, I was running with Davide for all the uphill. At the turnaround point, I realized I was going faster than him and opened up a gap.”

For the women, drama ensued in the first 10km of the race with the lead group of female runners taking a wrong turn on the climb. The mistake cost the runners an extra three miles, delaying the group of runners by an hour or more.

Additionally, a wrong turned caused race favorite Maude Mathys to be disqualified, “I lost my way in the first part of the race, but I decided to continue to enjoy the race and the mountains and the sun” said Maude. With Maude out of the race, Judith Wyder—the top qualifier from Switzerland—finished the race in first place, beating second place, Silvia Rampazzo by 31 minutes. Meg Mackenzie finished in third place, capitalizing on the other runners’ wrong turn.

Overall the GTS final was one to remember with an intense course and an even more impressive mountain setting. “It is a very cool race, it’s amazing to see the difference landscapes of Nepal, you start in the jungle and then go up through the forest and then the mountains,” said Kilian. As Davide described the race “It was a really nice adventure for all the runners”.