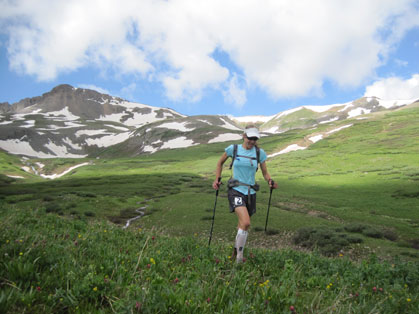 The Hardrock 100 Mile kicks off tomorrow at 6 a.m. in Silverton, Colorado, and Diana Finkel (pictured above) will be looking to continue her dominance of the brutal course through the San Juan Mountains.

“I love the San Juans and I love the Hardrock course,” says Finkel, who lives in South Fork, Colorado. Finkel has been the first female across the line for the past four years, and nearly won outright in 2010. Quite humble in her victories, she says, “I have been lucky enough to have some good days out there. As for HR 2012, I hope to have fun, enjoy the trails and feel decent most of the time … if at all possible.”

Finkel, who also set the women’s course record in 2009 (27:18:24), notched wins this year at New Mexico’s Jemez Mountain 50 Mile and Colorado’s Sage Burner 50K in May. She continues, “You never know what the day brings so it’s tough to predict, for me at least.” It could be a fast year, too, as the course is snow free and unaffected by wildfires.

Race day, Finkel will contend with Boulder, Colorado’s Darcy Africa, who placed second behind her at both the 2011 and 2010 edition of Hardrock. Africa most recently won Wyoming’s Bighorn 100 Mile in June. Fellow Boulder Resident Krissy Moehl, who finished fourth at the Western States 100 in June and was the last woman to win Hardrock before Finkel, will also toe the line.

“I go into Hardrock with the goal of running my own race,” Finkel says. “It’s the only way I know how to get through. It’s a long day. We all go through lulls and highs and I just try to ride the waves.” 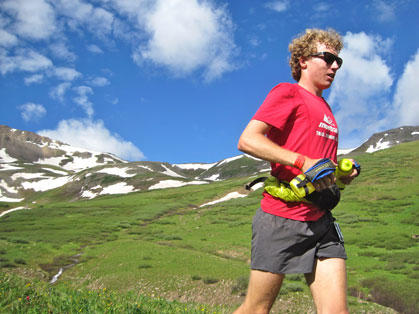 On the men’s side, observers excited for a rematch of the 2010 Western States 100 between Anton Krupicka and Geoff Roes were disappointed when both athletes withdrew their entries. But last year’s runner-up, Dakota Jones (2011 champ Julien Chorier is not entered this year), is returning and hoping to improve his finish. This spring, Jones (pictured above) of Durango, Colorado, has already won the Lake Sonoma 50 Mile in April and the Transvulcania Ultramarathon in May.

Also contending for the men’s title will be Karl Meltzer of Sandy, Utah, who won Hardrock in 2001, 2003, 2005, 2006 and 2009. In 2009 he ran the second-fastest time ever on the course, which is the course record in the counter-clockwise direction. The course alternates between clockwise and counter-clockwise each year; this year it will be run clockwise.

Other contenders among the men include Hal Koerner of Ashland, Oregon, who beat Meltzer at the Rocky Raccoon 100 Mile in February, and Adam Campbell of Victoria, British Columbia, who won the Chuckanut 50K in March.

iRunFar will have live coverage of the race on twitter. Follow @irunfar or go to twitter.com/irunfar for in-race updates.