Ready for the Big Dance

Chamonix is thumping with energy in anticipation of the week's marquis event—UTMB. Will this be the first year for an American men's winner? Or will the Frenchman Xavier Thevenard clench a record fourth victory? 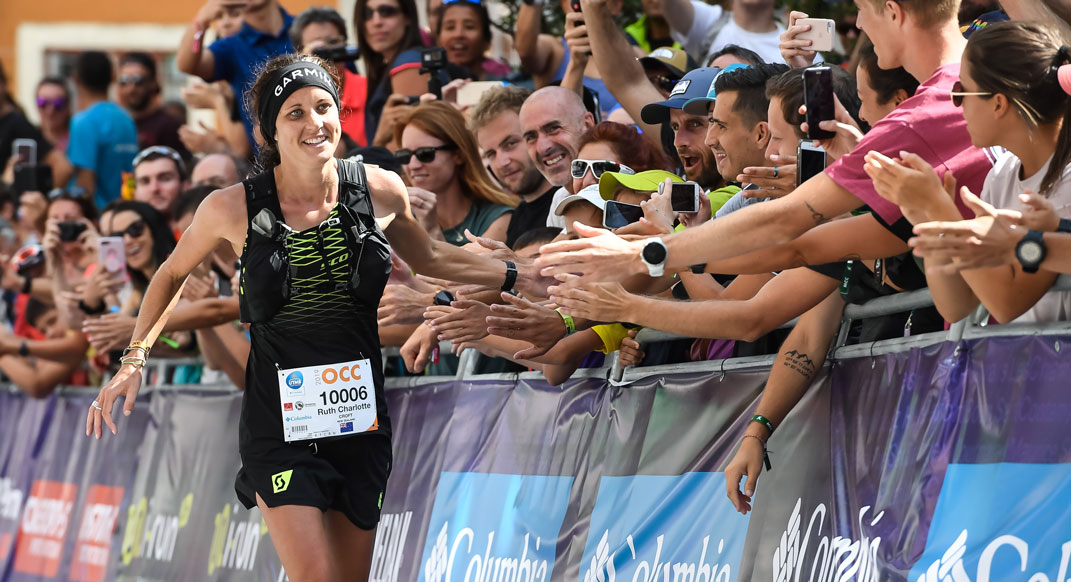 New Zealander Ruth Croft takes the win at Thursday's 55K OCC race, while the town and runners prepped for the big event—UTMB—which starts at 6 p.m. on Friday.

On Thursday, August 29, the sun lit up the glacier-capped Mont Blanc while god rays filtered through the sawtooth needles of the Aguilles towering above Chamonix, France, 12,000 feet below. There, an international throng relaxed under the colorful umbrellas of its plethora of restaurants and bars and moseyed along the quaint cobblestone mall. But this was not just another beautiful—and quite warm—day in Chamonix.

At semi-regular intervals, the crowds parted for solitary or small packs of racers (flanked by family and supporters), legs (or compression socks) dirt stained, poles clicking along. Cheers, shouts—allez! nice job! bravo!—and clapping erupted as the racers passed, spreading down the street like a wave cheer.

The weary runners were finishing two of the series’ events in progress—the 56K OCC and the 145K TDS—and headed to the big blue arch in the town center below the old church. Crowds lined the finish chute, music bumped from the speakers and excitable emcees announced the finishers, switching seamlessly between French, Spanish, English.

Just a stone’s throw away in the Place du Triangle de l’Amitié, another crowd gathered for the ceremony announcing the CCC (101K) and UTMB (171K) elite athletes. Following (some would say long-winded) speeches from the UTMB race director Catherine Poletti, Chamonix’s mayor, Eric Fournie (himself a trail runner who has twice finished the CCC race), and others, a French announcer did his best Bruce Buffer (the boombox-voiced UFC announcer) imitation, firing up the crowd, as the skies let loose with light rain.

After the CCC elites were introduced, the UTMB athletes were called up. A string of accolades was followed by a resounding salute to “Tiiiimmm Tooollllleefffffsoooon!” Looking like a athletic movie star with his sunglasses, blond hair and ripped legs, Tollefson bounded onto the big stage, joining other elites who were selected to be here based on their ITRA (International Trail Running Association—it’s a big deal in Europe and elsewhere abroad) points.

While the UTMB races include 100 nationalities, the United States was well represented, with three American women—Courtney Dauwalter, Rory Bosio and Katie Schide—and four men—Tollefson, Alex Nichols, Zach Miller and Hayden Hawks—in the elite lineups of 10 (for each gender). While American women have won UTMB (including Bosio in 2014 and 2013), no American man has yet to attain the top spot. Will this be the year?

“If that happens,” says Trail Runner Contributing Editor and Chamonix resident, “this town is going to go nuts. They love the Americans!”

Once the pomp and circumstance ended, the athletes were herded to the nearby Hotel Mont Blanc, where a school of journalists pounced for a feeding frenzy of brief interviews.

Here’s what we heard from a few of the top American contenders and the favorite Xavier Thevenard, a three-time UTMB winner.

“It’s hard to have a favorite for a 100-mile race, around the Alps especially. There’s just so many variables in that amount of time, 24 hours or 28 hours. I’m excited to be here and to see what happens.”

“Tomorrow night the action goes off. I’m pretty psyched. It’s good to be back here in the valley, for the fifth year in a row [he has two third-place finishes]. And I’m hoping for a little better fortune this year.

“I’m really excited to have the opportunity to do the full loop. Not many people do, and I feel fortunate to take another crack at it. I’d like to avenge myself for last year’s mishap [he was injured in a fall and later dropped], and I know have a performance in my legs that myself, my family and hopefully the local communities here can be proud of. I’m just looking forward to getting out there and enjoying another loop of Mont Blanc—it’s a rare opportunity and I’m not going to take it for granted.

“What’s neat about this race in particular is that there are so many gentlemen who are incredibly talented and ready to go. So I think it’s going to be a bare-knuckle boxing match out there, and I’m happy to be part of it.

“This is my first 100-mile race, so I won’t know anything after kilometer 116. For me, it’s just seeing what I can do on that day, and not getting too caught up in anything else. At the end of the race, that’ll maybe be my motivator to push a bit harder.”

“In an ultra race, anything can happen. People talk a lot about my three wins [2018, 2015, 2013], but tomorrow we’re all on an even footing. With three wins or zero wins, it’s the same; we all have the same chance of being up at the front. We’ll see tomorrow; nothing is written in advance.

“I’ll just run my race, and try to manage things as I usually do. That certainly won’t put me up front at the start, but I’d like to be in a good position at the end—and if I can hit my checkpoint times, I should get a decent result. But I’m not focusing on the result. I’ll take things as they come, see how I feel, and just follow my protocols for pacing and nutrition. And we’ll see how it goes.”

“I have a lot of experience on the course, between training and racing on it. So I think that’s good, in that I just know how it lays out, and I can try to strategize accordingly.

“But, sometimes, too much knowledge can be a hindrance as well. So I have to try and not overthink it, and just take it as it comes.”

“I feel very confident going into the race. I mean, my training’s been excellent. I’ve been very fresh this year, I haven’t overraced, I haven’t overtrained. I just can’t wait to get started.

“If I do exactly what I know I need to do, I should be fine, make it to the finish line and have a good experience.

“I am a competitor, and in every race I go for the win. You’re going to see me up there competing with the top guys, and I’ll do my best to pull out the victory.”