A grinder of a race in the Appalachians. 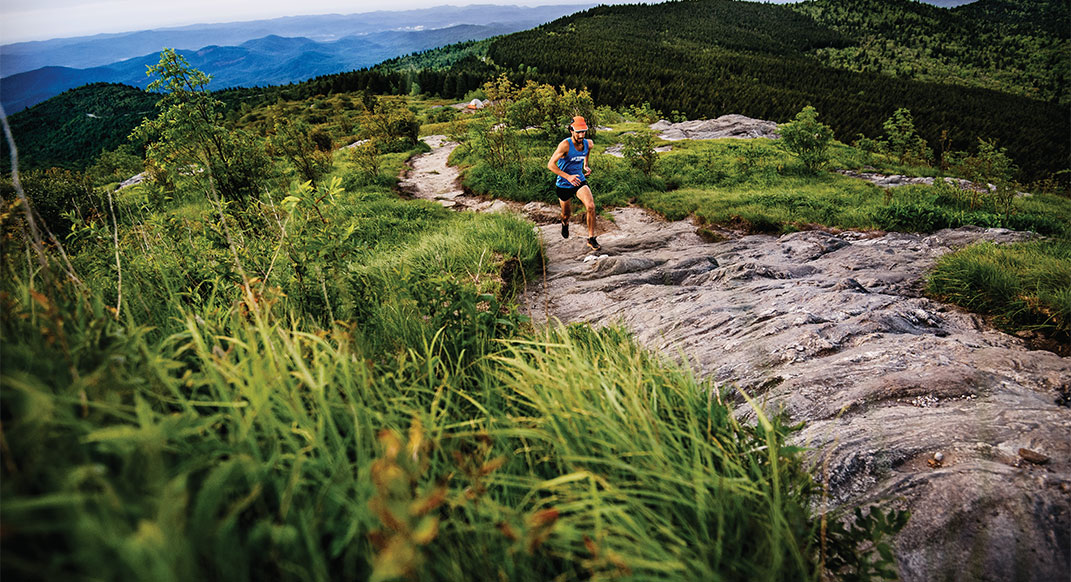 Back in 1980, before trail running was really a thing, a bunch of hearty runners in Asheville were ahead of the curve. On December 13 of that year, 64 intrepid runners hoofed their way up the ridgeline of the Blue Ridge Parkway to the top of 5,722-foot Mount Pisgah, following the same 17.8-mile route business tycoon George Vanderbilt used to take while going from his Asheville mansion, known as the Biltmore Estate, to his hunting lodge on top of the mountain.

Runners have continued that tradition on the first Saturday of November, racing over a short section of paved roads, followed by four miles of doubletrack trails and 13 miles of singletrack dirt paths to the top of the mountain. Now in its 38th year, the point-to-point Shut-In Ridge Run is one of the oldest continuously held running races in the U.S.

The trail was named for the tunnels of rhododendron and mountain laurel the course passes through during the summer months, which give runners a “shut-in” feeling.

“It’s definitely a grinder of a race,” says Asheville runner Ty Stevens. “It involves a robust climb, and rivals just about anything you’ll find in the Southeast.”

Stained-glass awards are presented to the top male and female finishers, as well as cash and merchandise prizes from Asheville’s Jus’ Running retail shop.

Located on the western flank of North Carolina’s Blue Ridge Mountains at the confluence of the French Broad and the Swannanoa rivers, Asheville is an outdoor-sports haven.

“It’s got just about everything you’d want in an idyllic little town,” says Stevens.

“There is so much variety, you could do something different every single day,” says Luke Paulson. “The running community here is excellent, with lots of fast competitive runners, lots of recreational runners and a lot of people who are just excited to get out on the trails to explore and try something new.”

One of the most popular local areas to run is the vast Bent Creek trail system, which includes about 30 miles of trails.

There are dozens of trails within the extensive Blue Ridge Parkway trail system, which stretches 469 miles in from Cherokee, North Carolina, to Afton, Virginia, including more than 30 miles adjacent to Asheville. The Mountains-to-Sea Trail is a 1,200-mile route that, when completed, will stretch from the Great Smoky Mountains on the North Carolina/Tennessee border all the way to the Outer Banks on the Atlantic Ocean.

Luke Paulson had been hearing the siren call of the trails for a few years when he finally packed up and left the Raleigh-Durham-Chapel Hill area of North Carolina for the mountains.

“Two of my biggest passions are running trails and healthy food and there was a lot more opportunity for each of those here,” says the 25-year-old Paulson, who is a chef at Rhubarb, a farm-to-table restaurant in Asheville. “Being an athlete and wanting to be as healthy as I can be, food is the best place to start. You’re not going to feel good on your Saturday run if you gorged on something that’s not healthy on Friday night.”

Paulson has run a variety of trail races up to 50 miles.

“I’d love to run some longer races,” he says. “I’m going to focus on 50K to 100K for now, but I’ve gotta run a 100-miler at some point. I’m not sure if that’s where my expertise lies, but the physiology and the mental aspects of pushing your body beyond what you think it can do is really fascinating to me.”

When he’s not running, Paulson is often tending to his vegetables and chickens, or cooking with his friends.

“The idea of a sustainable food system is very important to me,” he says. “I’ve always loved to cook. I learned from my dad and watching a lot of Food Network shows, but also from working in restaurants after college and just cooking with my friends and appreciating a really nice meal.”

Neither of those first two pics in the article are actually on the course.

Neither of the first two pics of the area are actually viewable on the course. The first one looks more like something that might be on the Art Loeb Trail in the same area though.

Here’s a more detail history of the Shut In: https://www.blueridgeoutdoors.com/magazine/august-2015/shut-in/