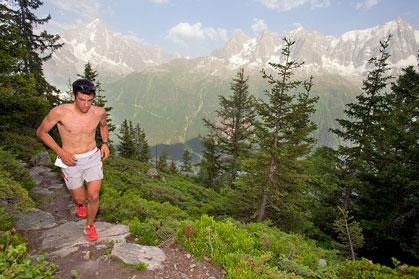 Spain leads the current SkyGames team standings, over Italy (second) and France (third). The SkyGames, an ongoing competition among 19 different nations, involves four more events: SkyBike (a duathlon bicycle/running race) and SkyRelay (a multidisciplinary team contest) in July, and the 21-kilometer SkyRace and the SkyMarathon in August. More information about the SkyGames can be found here.

In the Heavy Half, Jordan Tucker demonstrated that you don’t need to be from the mountains to run fast in them. The Gretna, Nebraska, native won the 15.5-mile race in 2:17:45, over two minutes ahead of runner-up Thomas Lekan of Denver, who crossed the line in 2:20:01. He was two minutes ahead of Joanna Masloski of Littleton, Colorado, who finished first among women and third overall in 2:22:01. McKenna Douglas of Edwards, Colorado, finished second in the women’s race in 2:31:28, good for seventh overall. Complete results of the Heavy Half can be found here.

Logan Peak Trail Run
Seth Wold of Lehi, Utah, claimed a victory and the course record at the Logan Peak Trail Run—a 28-mile race that covers 7261 feet of elevation change and climbs as high as 9710 feet—in Logan, Utah, Saturday. His 4:00:07 put him nearly 10 minutes ahead of his nearest competitor, Logan, Utah’s Joe Furse, who finished in 4:09:53. Jonathan Allen of Simpsonville, South Carolina, finished third in 4:11:58.

Complete results of the Logan Peak Trail Run can be found here.