The Nine Trails entrant’s list is ridiculous. Keep an eye on this one. 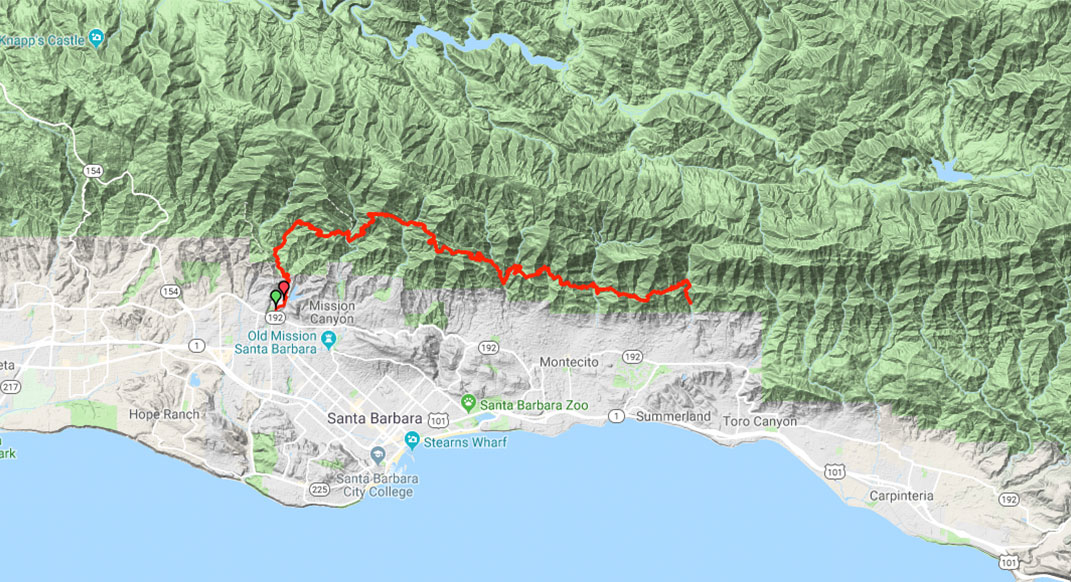 Hardrock 100, Western States Endurance Run, Ultra Trail du Mont Blanc… Most folks in the trail-running community have heard of the sport’s most iconic races. It might come as a surprise, then, to learn about an event that mostly flies under the radar and has attracted many of the sport’s most competitive athletes for its 2019 edition. The Santa Barbara Nine Trails Ultra is an old-school, 35-mile, climb-heavy race in Santa Barbara County—and it is stacked.

The roster features the highest density of competitively-ranked participants—on both a local and national level—in the race’s history, according to race director Luis Escobar, 55, an accomplished ultrarunner who was the featured photographer in the book, Born to Run, authored by Christopher McDougall.

Says Escobar, “The race docket appears to be the most impressive entrance list in the country.”

As an annual springtime event (this year’s event is right around the corner, Saturday, March 23rd) the race provides a solid building block with beautiful Southern-California views as folks train for longer summertime races.

“Lots of things play into (me signing up for the race),” says Walmsley, 29, of Flagstaff, Arizona. “March is a nice time of year—without big options—and this is a distance that you can use to build into April and May races, where there are notoriously a lot of big race options.”

Close to three decades ago, Nine Trails was created by Patsy Dorsey, a local trail-running legend for her countless volunteer hours at running events. She was a powerhouse member of the Santa Barbara Athletic Association and has finished more than 100 marathons. In 1990, Dorsey founded the race to celebrate her hometown while providing runners with a hard-won challenge, reports the Santa Barbara Independent. She managed Nine Trails until 2004, when Escobar adopted the race.

“The race is stacked with a ton of top U.S. talent. It’s going to be fun to mix it up with everyone,” says Freriks, 28, also based in Flagstaff, Arizona.

The Santa Ynez Mountains tower 4,000 feet above Santa Barbara which is bordered by shoreline and the Pacific Ocean to the west. The race kicks off at the Jesusita Trailhead and climbs to Inspiration Point, at an elevation of 1,350 feet. After the solid warm-up, runners descend via a connector trail to Tunnel Trail, which zigzags back up to 2,445 feet. Then, racers drop elevation to Rattlesnake Trail, which leads athletes to the highest point in the race at 2,450 feet.

“It’s hard to find a mountain race in the spring. It was great to see a competitive field shape up for Nine Trails—a race that’s more my style—and for the race to take place in the earlier part of the year,” says Nypaver, 30, a USA Track & Field-and Lydiard-certified coach and professional runner based in Boulder, Colorado.

The highest point of Nine Trails isn’t the end. After the crux, runners take West Fork Cold Springs trail down to the base of the mountains—only to seesaw back up East Fork Cold Springs trail. For the final segment, runners follow Edison Cat-Walk and Buena Vista Trail to the end of the first half. Racers then turn around at the Romero Canyon Trailhead to complete the out-and-back. In total, the course gains 11,000 feet of elevation.

While Bradley is on the roster, she’s still contemplating her choices. “There is a Salomon event that I may have to be on the same day as Nine Trails so I’m mulling over what to do. Nine Trails and I have a long history,” says the Boulder, Colorado local. She continues: “The only reason I signed up was because Luis and I made a bet! If I beat his fastest time on the course, he has to get my face and Nine Trails official time tattooed on his chest.”

Beyond Bradley’s potentially suspenseful race, this year’s event will also celebrate the re-opening of a handful of the trails, which were damaged by the 2017 Thomas Fire. In a community effort, the Montecito Trails Foundation and the Santa Barbara County Trails Council, as well as many other organizations, helped to restore the landscape.

Considering an early-season race to slingshot the year? Sign-up for the Nine Trails 35-miler or two-person relay here, or head out as a volunteer.

The line up is awesome, but the only thing that makes it sweeter for us locals is to see a race return after the devestating fire and mudslides! It’s a sign of hope and all the work and dedication of hundreds of people putting their sweat, love and time into the trails. And, for Luis believing in this event and community and staying steady.

These are no longer fast trails. Due to the mud slides, excessive rain there are now three times as many stream (small rivers) to cross as well as some trails littered with rocks and uneven surfaces. Expect a very technical trail race!

It’s only stacked in the mens field because the coconino cowboys are racing!

My dad Albert Woolfolk was the artist for the original race poster for this race (in 1990?). I hope some copies are still around. It’s a phenomenal poster, hand drawn. I have some if needed.

This race was truly epic. So many great runners, both local and from all over. There is some great footage of the leaders in this video I put together,