UMTB joins hundreds of trail races around the world that are cancelling this season. 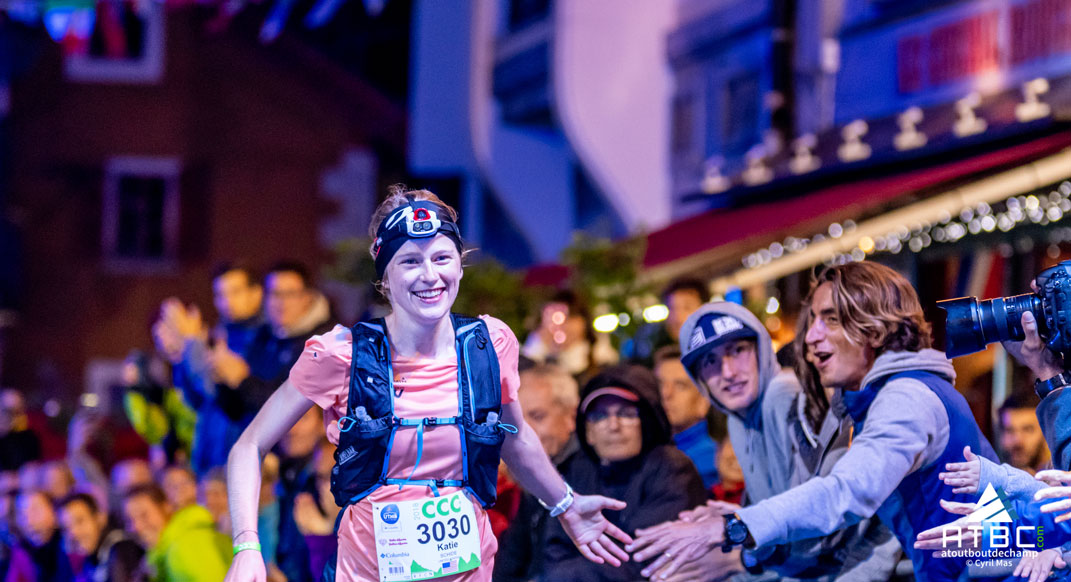 U.S. trail runner Katie Schide, who currently lives and trains in southern France, was one of the top-ranked runners in the world headed to UTMB this year.

6:00 pm, Friday August 28, 2020. Every few seconds, another trail runner leaves Chamonix, France, assuring 10 meters of spacing. Each runner is wearing a mask. With 2,200 participants, a human ribbon soon stretches 22 kilometers down the valley, and up and over the big climb of 1,653-meter-high Col de Voza. At the first aid station in the village of St. Gervais, runners discover that Plexiglas barriers separate them from the volunteers.

It’s a dystopian picture in which the organizers of the Ultra-Trail du Mont-Blanc wanted no part. And so, last Wednesday, race organizers took a pass on trying to implement the governmental health requirements that would have been required for this year’s race to take place. In doing so, the world’s largest gathering of trail runners, sometimes nicknamed trail running’s Super Bowl, fell victim to the tiny virus that’s barely one one-hundredth the size of a human cell.

UMTB joins hundreds of trail races around the world that are cancelling this season. In the United States, it’s a list that includes the prestigious California’s Western States Endurance Run and, as of last Saturday, Colorado’s Hardrock 100.

The unprecedented decision for the 17-year-old series of six races came amid other challenges for UTMB. Starting on March 17, UTMB’s 15 employees were forced to work from home during the government-ordered pandemic lockdown. The stay-at-home order, backed by fines and strict oversight, lasted seven weeks. Race founders Catherine and Michel Poletti worked from their home in Chamonix.

“It’s been a difficult time,” Catherine Poletti confessed. “We’re a very connected team. It’s not the same,” she half-joked, “When you’re each at your own coffee maker instead of gathering around the one in the office!”

Not a Real UTMB

During their lockdown, the UMTB team studied how they might organize a race that respected the required virus barriers. For the 100-mile UTMB race, they explored the possibility of altering the event to host 1000 runners, leaving in waves of 200 every half hour. But, the concept was rife with pitfalls. How would they choose who got to run? Who would shoulder the costs of the larger-than-normal tents and additional volunteers needed at more than a dozen locations? Then there was the question of masks, that would be required if the spacing between runners was less than 10 meters.

“Can you imagine,” Poletti said, “Asking runners to run around Mont Blanc, wearing masks? In the end, it’s not a real UTMB. It’s not in the spirit of trail running.”

“One of the greatest joys of running an event like UTMB is the atmosphere created when so many athletes come together in one place,” said Emily Schmitz, a Hoka-sponsored athlete from Wauwatosa, Wisconsin, who now lives and trains in Bogotá, Colombia. Schmitz ran UTMB’s 56-kilometer OCC race last year. “UTMB is a time to share our love for the sport, to spend time with one another, and run together. When we lose these aspects,” Schmitz said, “We have lost the essence of what the event itself means.”

UTMB is a time to share our love for the sport, to spend time with one another, and run together. When we lose these aspects,” Schmitz said, “We have lost the essence of what the event itself means.

“Trail runners come to UTMB from all around the world,” Poletti explained. “They dream of the start with thousands of runners, Vangelis’ Conquest of Paradise playing, the crowds in Chamonix, fans lining the villages through which they pass. And, of course, they dream of their return to Chamonix as heroes. That UTMB,” Poletti, explained, “Is impossible for us this year.”

Race organizers were able to return 55 percent of the entry fee to participants, and UTMB allowed runners to donate that amount to one of nearly a dozen charities, if they wanted.  In announcing the decision, UTMB named four principles that were pivotal to them: the health and safety for participants, a “full and complete” experience, taking advantage of the long-held mountaineering option of turning around when conditions are unsuitable, and, finally, “solidarity and equity,” neither of which were available this year, due to the uneven training and travel opportunities that currently exist.

Fears of Another Outbreak

In the three countries through which UTMB passes, governments and citizens remain edgy. Borders are still closed, though there is hope that EU-countries will allow cross-border travel soon. Travelers from overseas, however, may need to quarantine for several weeks—or might not be allowed in, at all. UTMB was, in short, at the mercy of a global pandemic and government policies designed to keep their citizens as safe as possible.

Even if UTMB had attempted to offer their annual series of races, they would have faced another challenge: fear. It’s not clear that runners would have wanted to take part. Chamonix-based mountain guide Jon Bracey, also a strong trail runner with top finishes in a number of races, noted that, “At present there is still a large amount of concern and fear about Covid-19. It’s impossible to predict how the situation will evolve during the next three months.”

Sean Vanhorn, a competitive trail racer, might have perfectly captured the emotional rollercoaster that many are experiencing during the Covid era: “One moment I think everything is fine, the next, I think we are all going to die.

Sean Vanhorn, a competitive trail racer and ski mountaineering racer from Carbondale, Colorado, might have perfectly captured the emotional rollercoaster that many are experiencing during the Covid era: “One moment I think everything is fine, the next, I think we are all going to die.” Vanhorn was planning to run UTMB’s 100-kilometer long CCC race this year.

Behind the Scenes, The Inevitable Financial Hit

The UTMB organization is, by far, the biggest trail-running event to fall to the global pandemic. The event’s week-long stats place it more in a league with a multi-day rock festival than a trail race. By one estimate, the 10,000 racers add about $13,000,000 to the local economies around the Mont Blanc region. Add to that 20,000 supporters and an estimated 100,000 spectators, and the scale of the impact starts to become clear.  The event’s cancellation is a body blow to a tourist region that is already reeling from dramatic Covid-induced losses.

The larger UTMB race company, like others around the world, is sure to be financially impacted. The Chamonix-based UTMB race is now part of the UTMB group, which owns five international races as well as having a controlling interest in the Ultra-Trail World Tour. All of those entities have suffered cancellations, and it’s likely more are to come, as well. One thing is certain: race organizers will be spending years recovering to more stable ground.

Across the globe, trail runners who normally take part in races are recalibrating plans. US trail runner Katie Schide, who currently lives and trains in southern France, was one of the top-ranked runners in the world headed to UTMB this year. Like so many others, she’s finding herself returning to her roots.

“Races are a fun goal to train towards,” she said, “but I still love running, training, exploring and testing my limits just as much without a start or finish line.”

It’s a good mindset to have, for trail runners in the Covid era. Start and finish lines, it seems, may be few and far between in the months ahead.

Bogota-based Schmitz is keeping it local. “This is a great time to get to know your own neighborhood, nearby parks or other training resources that you have close to home. I’ll take the time to do things I normally don’t have time for—strength work, core work, and foam rolling—to name a few.”

Vanhorn, meanwhile, has FKTs or Fastest Known Times, on his mind, and is eyeing Colorado’s massive “Nolan’s 14,” a remote trail run that summits 14 of Colorado’s 14,000-foot peaks. He’ll also try to set a few FKTs of his own. His hope for this summer? That, “others are able to find joy in their running even though the events they have dreamt about have been cancelled.”

UTMB, for its part, plans to offer up something different for the coming summer that will be both virtual and physical. Poletti told Trail Runner that the organization would offer an event she described as, “People coming together for a cause greater than UTMB, whether they are in Oman, California, China or here in Chamonix.

UTMB, for its part, plans to offer up something different for the coming summer that will be both virtual and physical. Poletti told Trail Runner that the organization would offer an event she described as, “People coming together for a cause greater than UTMB, whether they are in Oman, California, China or here in Chamonix.” UTMB plans to announce the concept soon.  “I’m really sad for both runners and race organizers,” mentioned Poletti, who said she had recently spoken with Western States Race Director Craig Thornley. “Now is the time to do something for all of trail running.”

Meanwhile, Colorado trail runner and author Brendan Leonard, who blogs for Outside Magazine under the name Semi-Rad, was planning to run UTMB’s CCC trail race this coming August. He’d still like to run and hopes to make it to Chamonix in 2021. What is he doing with those extra 365 days now available for training?

“I have basically just decided to write off 2020, focusing on staying safe and surviving so I can do all the things I wanted to do this year in 2021 instead,” said Leonard. “My plan, I guess, is to be one year older when I do the CCC. I have a few ideas for routes I’d like to do within driving distance of my house, but mostly I’m just trying to be creative to keep myself from getting bored—running every street in my neighborhood in Denver, running trails at night to minimize contact with other people and looking back at old photos and reminding myself that this isn’t forever.”

It is sad to here this race is going to be cancelled. The is truly the most spectacular race in the world. Every small time ultra runner, like myself, dreams of making it the UTMB. It is a bummer for every one who is on pace to qualify for next year since the participants who missed this year will want to participate. I wish there was more optimism that by August we wouldn’t have to deal with all of these draconian restrictions. Regardless of what happens this year the dream lives on to one day run this race. Thanks for the update.
Ryan