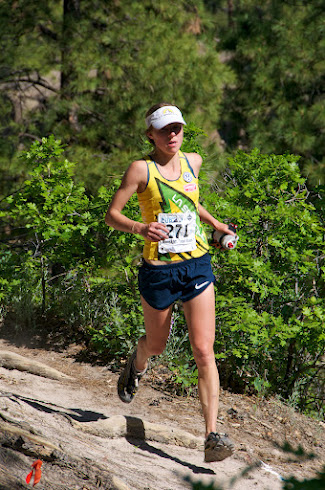 Megan Kimmel of Silverton, Colorado, won the women’s Half Marathon in 1:56:09. “Megan was happy to get the win after barely missing the top spot at this race over the past few years,” says race director Bill Geist. Alyson Bryant of Elkin, North Carolina, was second in 2:02:06 and Petra McDowell of Los Alamos rounded out the top three in 2:03:36.

In the 50K, Boulder, Colorado’s Jason Schlarb took top honors in a course-record 4:28:30, though Geist noted the course had been altered from past years due to wildfires. “Although the new course had less elevation gain than the original course, the overall impression of multi-time finishers was that the new course was as hard as the original,” he says.

Kilian Jornet shook off last weekend’s third-place finish at Transvulcania, where he was suffering from heat stroke, running 3:56:06 to win the Maratón Alpina Zegama-Aizkorri Sunday in the Basque country of his native Spain. Jornet’s time in this first race in the International Skyrunning Federation’s 2012 Skyrunner World Series was 22 minutes ahead of last year’s winning time but fell just under two minutes short of the course record, set by Robb Jebb in 2005.

“For me, running in Zegama is like coming home,” Jornet says. “This is the fifth time I’ve won and perhaps victory is not so important to me as it was the first time I won here. … Giving less importance to winning allows you to enjoy the races more.”

“The trail running season has just started,” he continues. “These results help you to feel more confident but you have to continue working on this confidence every day as the level is very high and the athletes are very strong.”

Reigning Skyrunner World Series champion Luis Hernando, also of Spain, finished second in 4:00:42, and running a 4:06:05, Tom Owens of Scotland overtook American Max King, who ran with Jornet and Hernando in the race’s early stages (King faded to 15th in 4:24:32).
On the women’s side, Spain’s Oihna Kortizar, the reigning 2011 Skyrunning champion, successfully defended her title (she ran a 4:52:30) despite a challenge from Britain’s Lauren Jeska for much of the race. Fellow Spaniard Nuria Picas caught Sweden’s Emilie Forsberg in the final kilometers to finish second in 5:01:26. Forsberg held on for third in 5:01:57 while Jeska fell to fourth in 5:04:11.

American Nikki Kimball, who finished second at Transvulcania last weekend, was eighth in 5:21:06.

The first annual Ultra Trail Mount Fuji was held Saturday. The 160K race from Shizuoka to Yamanashi was the first 100-mile race held in Japan, and was set to debut last year before a devastating earthquake hit the country. 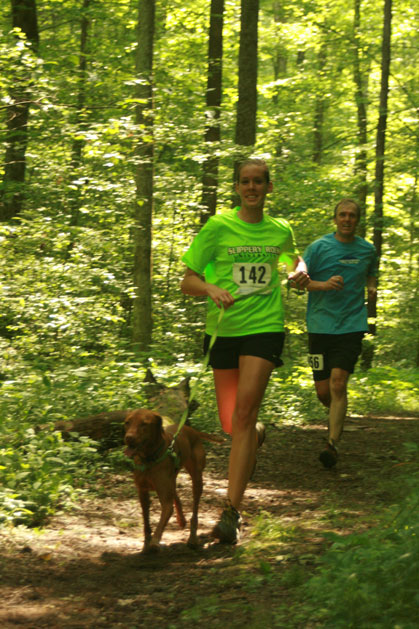 Photo by Don Parks of iplayoutside.com

Robert Smith of Huntington, West Virgnia, won the Dirty Dog 15K in West Virginia’s Kanawha State Forest in a time of 1:08 Saturday. While Smith, the 2011 runner up, held a commanding lead for much of the race, there was a battle behind him: Charleston, West Virginia’s Brandon Merritt passed Zach Beckett and Clay Warner late in the race to claim second in 1:09:54.4. Warner claimed third in 1:10.

In the women’s race, Maria Dalzot, of Morgantown, West Virginia, broke the course record by over eight minutes in 1:13:02.3—good for sixth overall.

“It will be a long time before that record is challenged,” says race director Daniel Todd of Dalzot’s new record.

Second behind Dalzot was Bethany Williams, who finished 31st overall in 1:23:42.9.

Runners at Dirty Dog are allowed to race with dogs, and “Top Dog” is a coveted prize. Warner ran the race with his German Shorthair Pointer, Macy, who claimed this honor for the second straight year.

Todd noted that, though the Kanawha valley had no rain for several days before the race, it was characteristically muddy.

Ricky Flynn of Lynchburg, Virginia, successfully defended his title at the Dominion Riverrock James River Scramble 10K Saturday in Richmond, Virginia. He finished in 32:08, 55 seconds ahead of Richmond resident Andrew Benford, who clocked a 33:03. Richard Morris, of Burkeville, Virginia, finished third in 33:19.

This was the fourth annual Dominion Riverrock, which bills itself as the east coast’s “premier outdoor-sports and river-life festival.” The three-day festival—now the largest outdoor sports and music festival in the U.S.—also included the Miller Lite Filthy 5K and a variety of other competitions, and drew over 65,000 spectators.