Italy’s 200-mile Tor des Géants is the world’s most difficult foot race. It will romance you with its views and quaintness before it takes out your knees. Could this be the best DNF you ever have? 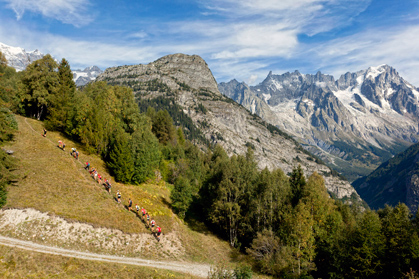 I had no illusions of finishing the Tor des Géants. The race, held in a remote cubby hole of the Italian Alps, represented a vacation as much as a chance to test my lungs, legs and heart against 200 miles of punishing climbs and painful descents. Still, the night before the race, as I stuffed my running pack with the race’s mandatory equipment, I pondered just how far I might make it.

“If you’re feeling good, keep going,” she said. With that nudge, I considered whether I could cover roughly the same distance as Boston to New York—if that route climbed over 78,000 vertical feet. That is more vertical gain than climbing Mount Everest, from sea level, twice.

The distance and the course’s vertical gain reveal only a small part of the story. In all, the Tor des Géants crosses 25 mountain passes (commonly called “cols” in Europe). Its trail rims at least 30 mountain lakes. It chaperones runners through 32 scenic alpine municipalities, the Gran Paradiso National Park and altitude fluctuations of an ear-popping 11,000 feet. It traverses the feet of four of Europe’s most famous “Four-Thousanders” (peaks over 4000 meters high), including the iconic Matterhorn.

The full distance, if I could miraculously run it, would be twice as far as I had ever run in one push. 150 hours—the time cut-off for the race—would take me from the race start at 10 a.m. on a Sunday morning to four p.m. the following Saturday.

I settled into bed with an odd sense of uncertainty.

MONARCH OF THE ALPS
More commonly known as “Mont Blanc,” 15,780-foot Monte Biancho rises dramatically at the northeastern corner of Italy like a trumpet blare at the end of a flute solo. It takes your breath away on first glance, and the second. Glaciers fill its couloirs, and cling impossibly to its steep walls.

At the foot of this natural wonder rests Italy’s least-populated region, the 1300-square-mile Valle d’Aosta. Only 129,000 people live here, a number likely dwarfed by the cows. One visit to the vacation hotspot reveals why: it is physically difficult to live on 40-degree slopes and perhaps mentally difficult to survive its box-canyon isolation. This is the arena for “Tour of the Giants.”

Upon learning of the Tor several months earlier, I half wondered if it was a joke. I could imagine The Onion running news of the race as a poke at our growing culture of “Look how extreme I am.” The race’s challenge was as ridiculous as a moon landing seemed in 1950.

The 332-kilometer counter-clockwise loop begins and ends in the hamlet of Courmayeur, and connects the famed Alta Via (“High Route”) 2 and Alta Via 1 hiking paths. The course is best summarized as “climb for two hours, descend for one hour, repeat.” Along the way, runners pass through 43 refreshment stations and life stations. The former provide minimal support in the form of soda, “agua” and food. There are seven of the latter, which provide all the replenishment of a fully stocked grocery store, plus tents for quick naps, showers and drop bags.

In the 2010 inaugural event, 330 runners seized the opportunity to visit this idyllic enclave. Stevie Haston, 54, from Courmayeur but raised in Wales, was one of last year’s competitors. “I am not a runner, but I’m tough,” he says.
Fifty-four percent of runners finished last year—including Haston.

CHURCH OF THE HOLY TRAIL
On a bluebird Sunday morning, September 11, I stand amongst 500 runners from 22 countries in a quaint piazza beside the Church of San Pantaleone. I overhear conversation snippets in German, French, one of the Nordic languages and a throaty tongue I cannot place. A film-crew helicopter hovers above the town square and just ahead, the walkway funnels into a curving, narrow pedestrian alley lined three deep with spectators.

“Tre … Due … Uno!” shouts the announcer. And we are off, running at a relaxed pace through a tunnel of noise—shouts and the clanging of cowbells bouncing from stone walls to window shutters. Shopkeepers stand along the walkway, some shouting, “Allez, allez, allez!”

A mile later, we funnel onto an ascending singletrack trail, beginning the first climb of the day, 4420 vertical feet to Col Arp.
The first climb of any race is filled with excitement, hope and overzealousness. The Tor des Géants, despite its epic scope, is no exception, as runners work to pass each other on a ribbon of singletrack switchbacks no wider than a medium pizza.