Getting’ Crazy at Loon Mountain 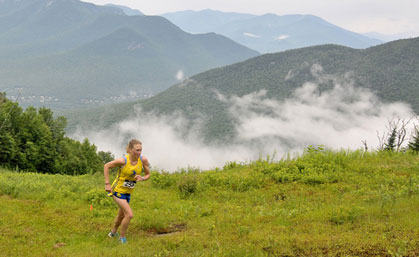 The problem? Only four women will get to go—and there will be plenty of competition from non-USMRT veterans as well.

“I honestly feel like this is the strongest, fastest group of American female mountain runners that has ever been assembled in one place,” says Ellen Miller, manager of the Women’s USMRT.

Leading that field will be defending U.S. and World Mountain Running Champion Kasie Enman of Huntington, Vermont (read our Q&A with Enman on her preparation for Loon Mountain here: https://trailrunnermag.com/people/q-and-a/393-kasie-enman-gets-ready-for-us-mountain-running-team-qualifiers).

“Kasie is the women’s record holder at Loon and has a good ability to run uphill,” says USMRT team leader Richard Bolt, who also says Enman’s third-place finish at the Mount Washington Road Race in June—behind Kim Dobson and Brandy Erholtz, both of whom will be competing Sunday—is not indicative of her strengths as a mountain runner. “[Mount Washington] is a fast mountain race on a paved surface. Loon has some very steep, very technical sections, and that will play to her strengths.”

“But we’ve never had a women’s field that has been this good,” he continues.

That field includes USMRT veteran Erholtz of Evergreen Colorado, and Dobson of Aurora, Colorado, a multiple champion of both the Mount Washington Road Race and Pikes Peak Ascent, who will be attempting to make her first team.

In addition to Dobson, the elite women’s field contains nine competitors who will be trying to make their first USMRT. They include Morgan Arritola of Ketchum, Idaho, who competed on the U.S. Nordic Ski Team in the 2010 Winter Olympics and earlier this summer won the Vail Pass Half Marathon at the Teva Mountain Games (read our Q&A with Arritola here: https://trailrunnermag.com/component/content/article/124-q-and-a/373-morgan-arritola-and-her-freewheeling-training-plan) as well as Corrine Malcolm of Hayward, Wisconsin, a member of the U.S. Biathlon Team and Olympic hopeful in that sport (read our Q&A with Malcolm here: https://trailrunnermag.com/component/content/article/124-q-and-a/371-corrine-malcolm-the-multitasker-).

“There are some women who have never run this course before but are clearly very fast, so we’ll see how they do,” Bolt says. “Dobson comes to mind, and so does [Crested Butte, Colorado’s] Stevie Kremer.”

“We could see a repeat of four people who have been on the team before, or we could have four newcomers,” says USMRT Junior Team Manager Paul Kirsch, who also serves as a director for the Loon Mountain Race. “My guess is it will be somewhere in the middle.”

“This year, Mount Washington worked for the men’s qualifying race because the elevation and the [7.6-mile] distance were perfect,” says Kirsch. “But the women only run 8K at Worlds, so we wanted to have a separate qualifier for them, both to simulate the terrain and distance and to get the benefit of some exposure for the women’s race.”

Kirsch noted that, with one section of descent removed from the course this year, the race is approximately five miles.

“The last kilometer is on a black-diamond ski slope,” he says. “I’d say at best, 10 percent of runners actually run it in a normal year. It averages 30-percent-plus grade, and there are sections over 40, so it will be a bit of a shock to people who haven’t raced the course before.”

The Loon Mountain Race was started in 2006 and was part of the New England Mountain Running circuit before serving as the women’s USMRT qualifying race. The top four American women at Sunday’s race will earn a spot in September’s World Mountain Running Championship in Italy.

The race starts Sunday at 9 a.m. Eastern. Live twitter updates will be available: follow @usmrt or go to twitter.com/usmrt.