First U.S. trail-running events to test for PED use 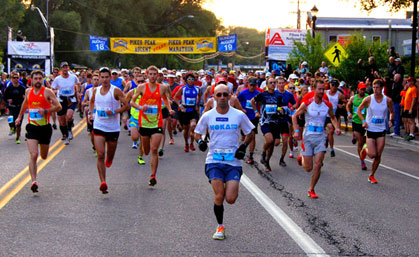 Start of the 2012 Pikes Ascent. Photo courtesy of Tim Bergsten/PikesPeakSports.us

There’s been much ado lately in our community about PED use [see “No Love for Lance: PEDs and Trail Runners Don’t Mix Well”, Editor’s Note, April 2013, Issue 87]. Today, just one day before registration opens, the venerable Pikes Peak Marathon and Ascent announced plans to test runners for performance-enhancing drugs in the 2013 events this August.

Several runners who finish in the top 10 in each race will be randomly selected for testing by the United States Anti-Doping Agency (USADA). The Pikes Peak Marathon and Ascent will be the first U.S. trail-running events to test for prohibited substances.

“Mountain and trail-running races continue to grow in participants and prestige,” says Ron Ilgen, President of Pikes Peak Marathon, Inc. Though he says he doubts that any Pikes Peak runners have used PEDs in the past, he believes, “It is important that mountain running joins the ranks with road races in ensuring that our competitors are drug free.”

Three-time winner of the Pikes Peak Ascent, Simon Gutierrez of Colorado Springs, says: “With the big prize money at Pikes Peak I think most mountain runners will feel positive about it.”

More information about the testing process can be found at www.usada.org/athletes.