The Alabama 100-miler is an epic challenge by day, a raucous party by night, and plays host to some of ultrarunning's rowdiest aid stations 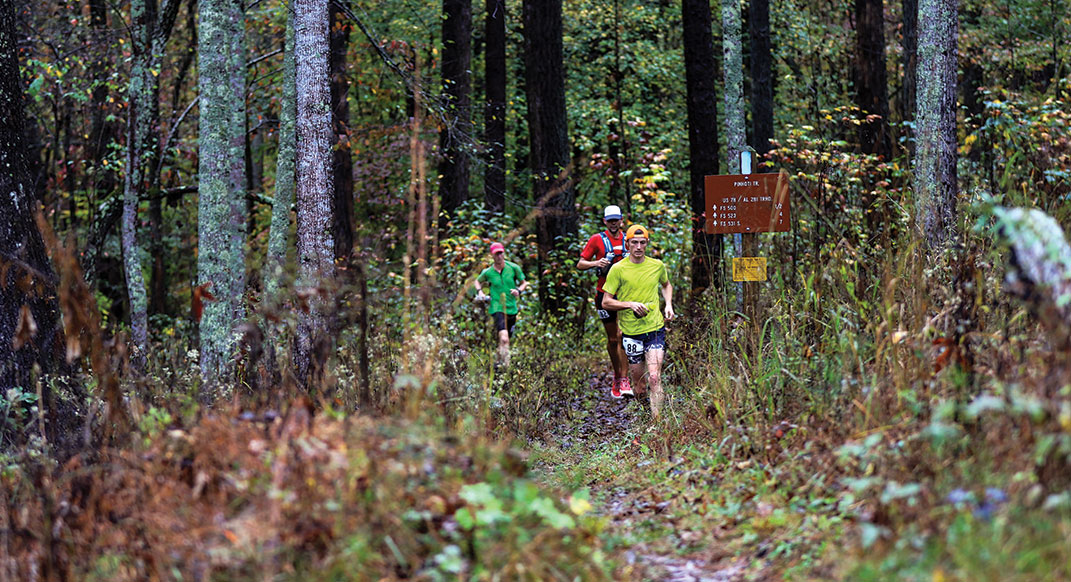 With nearly the same vertical gain as Colorado's famed Leadville 100, Pinhoti is not to be taken lightly

When Todd Henderson first dreamed of a point-to-point 100-miler in his home state of Alabama, he was simply trying to do his running friends a favor.

“I just wanted to give people the option to do something more local,” says Henderson. “I had no idea what I was creating.”

The year was 2008. At that time, the closest 100-mile trail races were nearly 500 miles away in Arkansas or North Carolina; anyone in Alabama, Mississippi, Georgia or Tennessee who wanted to run a 100-miler had to travel. This seemed especially lamentable given that Henderson’s town of residence, Sylacauga, sat poised at the edge of a 392,000-acre expanse of wild woods, mountains, creeks, bluffs and gorges stretching all the way from central Alabama to Georgia.

Cutting through the heart of Talladega National Forest is the 335-mile Pinhoti National Recreation Trail. The trail is marked with blue blazes and turkey tracks—the word “pinhoti” is Creek Indian for “turkey home”—which gave Henderson both a name for his brainchild of a race and a place to host the majority of its miles. The course begins in the woods near Heflin and finishes on the track of the high-school stadium in Sylacauga.

Since Pinhoti’s inaugural running in 2008, two Alabamans have finished it every single year—Kip Chassé, a 31-year-old firefighter and EMT instructor, and Wayne Phillips, 62, a self-described “woodsy-type person” who does construction work and lives in a house (sans computer) in the forest. Though both are avid ultrarunners, neither has ever run any 100-miler other than Pinhoti. But they wouldn’t miss it. “I treat it like my Super Bowl,” says Chassé. “It’s my test for myself to see what I got in the tank, what I can put up with.”

Chassé first learned about it during a post-race announcement at a local 5K. Having never run more than a marathon at that point, he thought, “why not?,” signed up and ran Pinhoti four months later. Eight years and eight buckles later, he says, “If you run it, I’ll probably see you there, because I don’t think I’m ever going to stop running this race.”

Contradicting any stereotypes about Alabama being flat, the race boasts more than 15,000 feet of vertical climb on its rolling ramble across the eastern part of the state. (For comparison’s sake, Colorado’s Leadville Trail 100 has roughly 18,000.) At mile 40, runners summit Alabama’s highest point, the 2,413-foot Mount Cheaha, before tackling a steep descent over mossy boulders, gnarled tree roots and creek beds.

Pinhoti’s ample aid stations—18 of them—are staffed by dedicated volunteers who appear to be in friendly competition with one another for the most creative aid-station themes, the loudest music and the most lavish food and beverage offerings. Last year, one aid station even hooked up a flatscreen TV to broadcast the Alabama-LSU football game live for runners as they came through.

“At mile 75, you climb 14 switchbacks up to Pinnacle,” says Phillips, “and they got a guy about 50 yards away from the aid station, hollering, ‘You want an egg-and-cheese sandwich? Grilled cheese? Egg-and-bacon-and-cheese sandwich?’ By the time you get there, you’re thinking about nothing but that egg sandwich. It helps you forget about all your other problems. And they have beer, too!”

Phillips and Chassé say it’s the people that really keep them coming back year after year—the hard work Henderson pours into the event, the lively volunteers, the fellow runners who go out of their way to help one another succeed. Phillips has fond memories of sharing some friendly chit-chat with famed ultrarunner Karl Meltzer in 2009, as the two of them led the race together for a few miles (“because I was an idiot, I guess,” says Phillips) before Meltzer went on to set a new course record.

At its heart, Pinhoti is a grassroots locals’ party. But over the years, it’s rightfully earned its reputation as a classic on the 100-mile circuit, enticing runners from as far away as France, India, Australia, Guam and Hong Kong. Henderson says more than a few veteran runners have crossed the finish line in the wee hours of the morning and told him, “This really is the Western States of the East.”

“That’s made me feel pretty good about what we’re doing,” says Henderson.

Getting There / The race’s host town of Sylacauga is a one-hour drive from Birmingham, or two hours from Atlanta.

Accommodations / Quality Inn in Sylacauga offers runners a discounted rate for race weekend. The Holiday Inn Express is another option. Primitive camping is also available in the Choccolocco Wildlife Management Area near the race start.

Thanks to her enthusiasm for fresh vegetables and hummus at the Hubbard Creek aid station in 2014, Yitka Winn is known in Alabama as Broccoli Girl. This article originally appeared in our October 2016 issue.

FYI. Some of you may know about the amount of work that is being done on top of Flagg Mountain (The southern end of the Pinhoti) and some may not. In an effort to bring more awarzeness and raise money, we (the Friends of Flagg Group and the Alabama Hiking Trails Society) are hosting an event Dec 29th. A 5k and 1 mile fun trail run will happen at 9am. I would love to see a large outpouring of support from this group. We are working on longer runs here for 2019 but need to see a great response first. Please consider joining us or donating for the cause by going to the link below.
Thank you for your support.
https://localraces.com/events/weogufka-al/pinhoti-winterfest-flagg-mt-5k-and-1-mile-fun-run-and-events