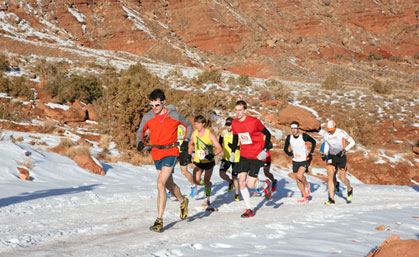 Over the weekend, over 800 runners flocked to Moab, Utah, for the sixth annual Red Hot 55K and 33K—the latter of which was the first race in this year’s La Sportiva Mountain Cup series. Competitors in the Mountain Cup vie for a $25,000 prize package, based on their best five races in the nationwide, 10-race series.

The day began with a chilly breeze in the air, but things warmed quickly. Following a short warm-up down a jeep road, the course quickly turned to its first climb, up a snowy slope. After this climb, the desert course remained fairly dry, and race director Chris Martinez had hinted that the conditions were ideal for a new course record.

Justin Ricks, 33, of Pueblo West, Colorado, had his sights set on accomplishing just that; he charged off the starting line and held his lead throughout the race, crossing the finish line in just under 2 hours 9 minutes—more than four minutes ahead of second-place finisher Jace Nye, 28, of Kaysville, Utah.  Several minutes later, Trent Briney, 34, of Boulder, Colorado, and Jason Bryant, 40, of Elkin, North Carolina, cruised in for third and fourth place respectively. Bryant also claimed first in the master’s category.

Says Bryant of the last four (relatively flat) miles, “I like it steep: up or down, it doesn’t matter. But the flats? I hate that.”

Martinez was inspired to create the Red Hot after a winter run in Moab several years ago with friend and accomplished ultrarunner Ian Torrence. Martinez describes that run: “It was a sunny winter day and with the sun’s rays striking the snow-covered spires I immediately thought of hot embers glowing…[which] became the inspiration for the Red Hot.”

For complete race results from the Red Hot, visit http://grassrootsevents.net.

For a complete calendar of La Sportiva Mountain Cup races, as well as information on the La Sportiva Going the Distance Initiative to support local trail organizations, visit www.mountaincup.com.