The Lost Art of the Fat Ass 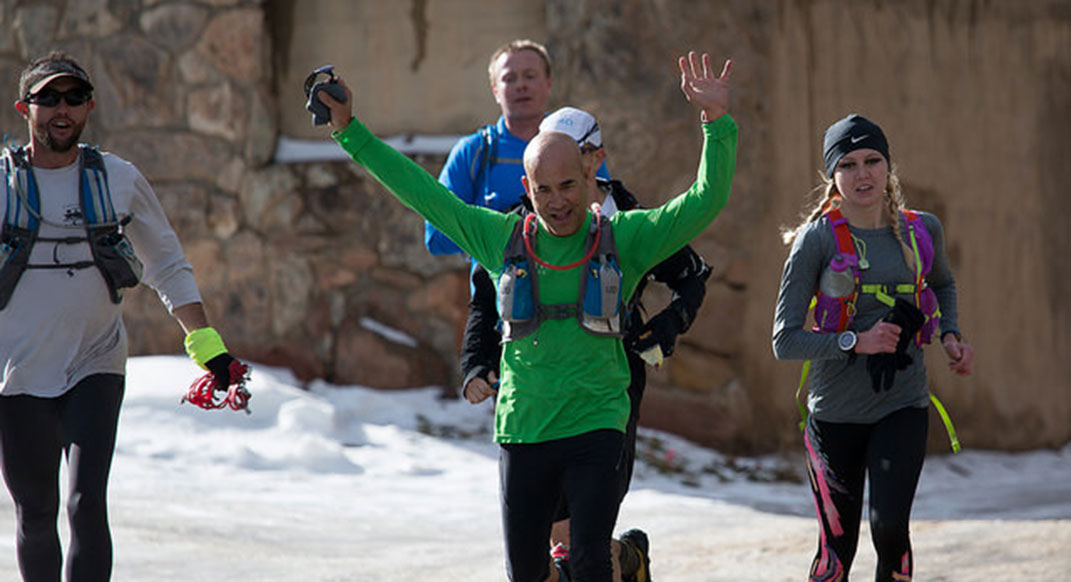 Runners at one of the Fat Ass-style races organized by Human Potential Running. Courtesy John Lacroix

Balancing on a short stone wall in a park on the bluffs overlooking Saint Paul, Minnesota, I flipped my phone’s camera into “selfie” mode and aimed. Behind me, about forty runners, dressed in everything from full lycra ski suits to plaid button-down shirts, raised their middle fingers.

“Perfect,” I said, snapping a photo then futzing with a text message. “We’ll send this to Ben … and we’re good.”

Local trail slayer Ben Kampf, husband to American middle-distance track star Heather, had not answered my invitation to the first sort-of-annual Codswallop Invitational, a 10-mile run that included bushwhacks as well as the park’s best singletrack. Its name betrayed its most basic concept: This was not a race. Not legally speaking, anyway.

“As far as we’re concerned, this is just a bunch of people showing up to run at the same place on a Sunday morning,” I had written in an e-mail first announcing the event. “The distance is inexact. If you get worked up over the discrepancy between an advertised race distance and your GPS data, you will not like the Codswallop.”

Atop this flimsy legal footing, I noted that Kampf, who two months earlier had won the Moose Mountain Trail Marathon going away, would be required to give all other competitors a 30-minute head start, but that he could erase 10 minutes of that for each beer he consumed pre-race. He could even start 10 minutes ahead if he downed a fourth.

Codswallop wasn’t an original idea – not by a long shot. Informal “races,” devoid of accoutrements like port-a-potties, finishers’ swag and course markings, have likely existed as long as running. Their emphasis is on fun, and community – the fundamental bricks on which our running lives are built.

But in an age in which organized races take place nearly every weekend – and some have grown so popular as to require near-immediate registration, or a lottery, to get in – low-key, under-the-radar, non-race events provide a refreshing change of pace to runners who feel the fun is lost in the pursuit of yet another finisher’s tee.

In ultrarunning parlance, these informal affairs are known as “Fat Ass” (or “fatass”) events. Sometimes, they’re exclusive, and they’re always at least a little bit hush-hush.

Sherpa John started his own series of Fat Ass events through his Human Potential Running race series (HPRS) after he moved to Colorado in 2011 from New Hampshire, where he had also started a series, in 2005.

“In New Hampshire, we had the same 8 to 12 people showing up at all of them,” he says. “When I moved to Colorado, the ‘trail-running Mecca of the USA,’ I was shocked to learn there were only three Fat Asses in the entire state, and you needed to know someone ‘in the know’ to even find out about them. That was unacceptable to me for a sport that focuses so much on the community.”

The first event he organized consisted of him and one other person, but by the end of the first year it was 15. The next year, it was 50, and the year following that it grew to hundreds. 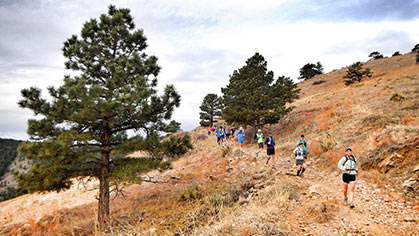 HPRS grew to include 11 Fat Ass events, as far as 100K and as long as 10 hours, all over Colorado. One weekend, called “Sufferfest,” even features back-to-back runs – 50K on Saturday and 37 miles on Sunday. Runners from as far away as Virginia, Missouri and California have taken part in some of his events.

A well-organized series of events might seem counter to the very nature of Fat Asses, but Sherpa John says he’s providing an antidote to the proliferation of paid races, as well as the growth in popularity of some classic events that now sell out instantly or require a lottery. Exclusion should not be the name of the game on the trails, he says.

The events are decidedly barebones. There are no course markings – only maps that runners can carry with them – and typically a basic aid station. It’s all at Lacroix’s discretion.

“[A lot of people would] rather run [an ultra] for free to see if they like it, and if they can cut it, before spending money on having their name in any official results,” he says. “It’s also a great way to step into the sport without the pressure of performing or making time cutoffs.”

This March, at the start of Sufferfest’s Saturday event, I grinned as Sherpa John told the runners gathered, “If you get hurt or killed, don’t sue me!”

It was the same legal firewall I’d established at the first Codswallop Invite. It was a show of good faith among friends, but it probably had its limits. Hold enough Fat Asses, and someone’s likely to twist an ankle or smack their knee on a rock; hold more, and one of those runners might not consider the verbal commitment a sufficient waiver. A non-race race exists in a gray area, and even the occasional trail runner is a tightly-wound litigious jerk.

Of course, Lacroix had already thought of that. “We used to just state that you participate at your own risk,” he says. “Now, because we’ve gotten so large, it’s much more complicated than that. HPRS had to purchase insurance policies for all nine of our Fat Asses.”

He also moved registration for the events onto Ultrasignup.com and requires runners to sign an online waiver when they register.

“Even then, we still stress that we are neither responsible for you or to you,” he says.

It might seem antithetical to the laid-back nature of a Fat Ass. But Lacroix’s realized his goal of sharing Colorado’s trails – perhaps too well. The get-togethers that once flew under the radar, in a state where land managers are much more strict than those in New Hampshire, no longer do.

“We average about 80 runners per run, so we’re actually having to get permits in some jurisdictions, and simply written permission from others,” Lacroix says. “Still, there are areas where we host our Fat Ass runs – and others do as well – [where] you cannot obtain a permit. In the past we’ve held those runs anyway, albeit a little more stealthily, and in a way that we feel is reasonable and responsible to the lands used.”

He says his methods have included staggering starts to avoid groups of more than 25 at one time.

“When we do this, you’d be hard-pressed to tell us that there’s 100 runners at the Fat Ass,” he continues.

Last summer, in the mountains and glaciers surrounding Juneau, Alaska, runners traversed the peaks and ridges that rise like walls from town. Often off-trail, they covered 15- and 28-mile courses (with about 9,000 and 15,000 feet of vert, respectively) designed by Juneau’s own mountain master, Goeff Roes. The 2010 Western States 100 winner held this Fat Ass-style event for the first time in 2015, and plans to host another event this year, which he says will be shorter but even more rugged and remote.

“The vast majority of this year’s route will be off of established trails, simply traversing wild mountain peaks and ridges, forming a very natural point-to-point route,” he says.

But in describing his event, Roes doesn’t just emphasize how difficult or beautiful the course will be.

“[It] is a very low-key event that is intended, more than anything, to be a celebration of long-distance mountain running,” he says. “I look at [it] as a party for local trail runners to get together and celebrate the amazing mountain-running terrain and community we have here in Juneau.”

Roes invites a veritable who’s who of Juneau running, from young guns to the famed “geezers” with whom he sometimes trains.

“And, of course, there’s a big party after the run with lots of food, beer and stories,” he says. “So the celebrating doesn’t stop when the running stops.”

If there’s one crucial element to every Fat Ass event, it might be where the beer is coming from afterward. Sitting first in the trailhead parking lot, then at a pizza place in Fruita, after day one of the Sufferfest, I met runners who had taken on Lacroix’s full 50K course, as well as some who had called it a day after 10 miles; it didn’t matter.

There, and at the desert campground that night, dirty jokes and the skunky smell of legal weed preempted any talk of who ran the fastest. It reminded me of hanging around the parking lot after Codswallop, sampling from the six-packs we’d collected as mandatory entry fees. We were just runners, hanging out, enjoying the very sport that had brought us together. It all seems terribly cliché – and it is – but it’s true.

It’s a vibe Lacroix says he tries to carry over to his actual, formal races.

“We focus on everyone, not just the fast or elite,” he says. “We carry that same communal, non-competitive mantra from the Fat Ass Series over to our races.”