Up (and Down) Pikes Peak 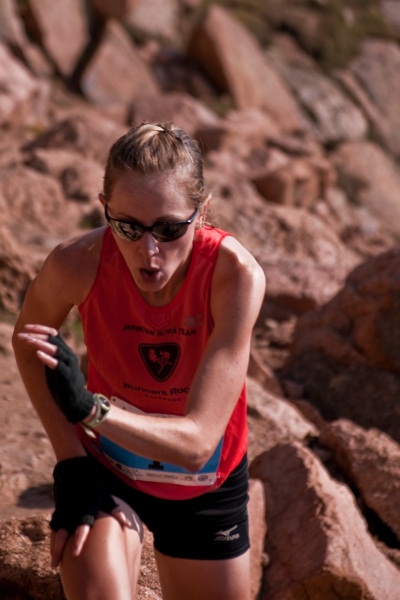 Spain’s Kilian Jornet helped solidify his status as perhaps the best mountain runner in the world Sunday, completing the Pikes Peak Marathon in Manitou Springs, Colorado, in 3:40:26. In the process he set a new record for the men’s 20-to-24-year-old age group for the course’s descent, running the second half in 1:21:41 (the previous record of 1:21:58 was set in 1983). This was Jornet’s first attempt at the race.

“I felt great physically. Alex [Nichols] and I broke away at the start and halfway up I was leading the race,” says Jornet. “I reached the summit with a [solid] advantage, which meant I didn’t need to take any risks going downhill.”

Nichols of Colorado Springs, would hold onto second, finishing in 3:47:22. Max King of Bend, Oregon, who says his race was “mediocre,” began to close on Jornet and Nichols on the descent but settled for third in 3:50:10.

Sweden’s Emelie Forsberg won the women’s marathon, completing the course in 4:28:07. Like Jornet, Forsberg set a female 25-to-29-year-old age-group record on the descent, completing the second half of the course in 1:34:09 (the previous record, 1:34:35, was set in 1981). Huntington, Vermont’s Kasie Enman, the reigning World Mountain Running Champion, finished a close second in 4:28:25. Mireira Varela of Spain was third in 4:32:13.

“I was very concerned about how I would respond to the lack of oxygen so my race plan was to stay conservative early and keep myself on the safe side of the red line throughout,” says Enman. “Things got a little ugly in the final mile of the ascent, but everything was under control at the turnaround and I was psyched to get things rolling on the downhill.”

Enman says the descent was torturous for all of the leaders, starting when she developed stomach problems shortly after the turnaround.

“I was surprised to see Mireia with maybe two to three miles to go. When I pulled up along side her, she stopped and said, ‘I vomit.’  I said, ‘Me too,’ and continued onward,” Enman says. “Less than 30 seconds later Emelie ran past us both saying, ‘I have a cramp.’  Too funny.”

Complete results of the marathon can be found here.

On Saturday, the day before the marathon, racers took part in the Pikes Peak Ascent, which covers the first half of the course, ending at the top of the mountain. Jason Delaney of Golden, Colorado, won that race in his third attempt with a time of 2:13:18.

“I felt awesome until about 8.5 miles when I had the first twinge of a calf cramp,” says Delaney, who was in third until he passed early leaders Ryan Hafer and Sage Canaday near mile 8.5. “From there on, it was a real struggle, as aerobically I felt good, but my calves were cramping on every big step. I was looking over my shoulder each switchback expecting someone to pass me.”

He held off runner-up Rickey Gates of Woody Creek, Colorado, though, who finished in 2:15:42. Hafer of Colorado Springs finished third in 2:16:34.

Perhaps the most impressive performance of the day and weekend, however, belonged to Kim Dobson of Grand Junction, Colorado, who won the women’s race and broke the women’s course record by over eight minutes. Dobson finished in 2:24:58, well under the previous record of 2:33:31, set by Lynn Bjorklund in 1981.

“All of my training times and race results this year have been faster than last year, so going in to the race I thought it would be possible to run around a 2:30 if I had a strong day,” says Dobson. “I was not expecting to be around 2:25! That finish was definitely the most unexpected, pleasant surprise I have ever had in a race! It taught me to never place limits on what you can achieve in a race.”

Complete results of the ascent can be found here.