7 Things to Love about the Trophy Series in 2015

As the Trail Runner Trophy Series kicks off this weekend, we present our favorite things about the annual trail-racing cup 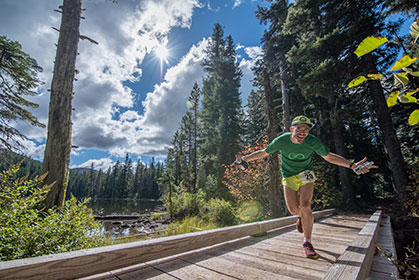 Trail runners racing in six states will kick off the 2015 Trail Runner Trophy Series this weekend. The stacked lineup includes a 5K, a 50-miler and everything in between, taking runners through landscapes ranging from the woods of Southern Indiana to the cypress groves of Florida to the slickrock of Moab, Utah

With trail races taking place every week between now and the end of September, the Trophy Series is just getting going. Here are seven things every trail runner can love about the series in 2015.

1. More races than ever

This year’s Trophy Series includes a staggering 194 trail races across the United States and Canada, more than ever before. With distances from 5K to 100 miles, and unique events like night runs and 24-hour races, there’s something for everyone! Find your ideal race today with the Trophy Series race calendar.

Getting outside is the main reason many of us run trails, and what better motivator to lace up your shoes and head out the door than a scenic trail race? At Trophy Series events, you’ll breathe in the crisp alpine air of the Rockies, see first-hand the haze that gives the Blue Ridge Mountains their name, escape the dreaded Southeastern humidity for the dry desert West and enjoy the temperate summers of the Pacific Northwest.

It can be tough to know where the best trails are when you travel somewhere new for vacation—or even when you’re looking for a change of pace closer to home. Make it easy on yourself: a Trophy Series race is a great way to discover rad new trails, wherever you may be.

All trail runners are a little strange, in a way only other trail runners can appreciate. If your non-runner friends have tired of hearing about training plans, heel-to-toe drop and mid-run pit stops in exhaustive detail, look no further than the next nearby Trophy Series race. It’s sure to attract dozens of runner types eager to discuss the finer points of trail racing, just like you.

Plus, if your idea of bonding is seeing who can out-kick whom at the end of a 20-mile sufferfest, regularly updated Trophy Series points standings allow you to see how you and your friends are faring against local and national competition.

At the end of the racing season, Trophy Series age-group champions, as well as podium finishers in the ultra category, receive sweet prize packages, including trail-running shoes, apparel and accessories. The “Miles Mogul”—the runner who logs the most Trophy Series race miles—and “Trail Fiend”—the runner who finishes the most Trophy Series races—will each win a grand prize: race registration, food and accommodations for the three-day Golden Ultra stage race, held in the mountains of Golden, British Columbia, a $600 value.

Winning races isn’t the only way to win swag this year: racers can also submit photos from Trophy Series races or training to the Trophy Series Photo Contest, then vote on their favorites (and tell their friends and family to do the same). The photo that wins the most votes each week will win trail-running gear from a Trophy Series sponsor. To enter your photos, go to the contest on our Facebook page, or post them to Twitter or Instagram with the hashtag #trophyseries.

2014 participants: have photos from last year’s Trophy Series? Enter them now for a chance to win a free Buff!

OK, maybe not so much the fortune part, prize packages aside. But you could live on in internet running history by making a splash in this year’s Trophy Series. Every month, Trail Runner writes about Trophy Series runners with unique stories; last year, a prolific trail runner who logs most of his training miles on a bike and a champion father-daughter duo were just a few of the compelling stories we shared.

Do you or a fellow Trophy Series runner have a story worth sharing? Let us know by sending us a message through our Facebook page!