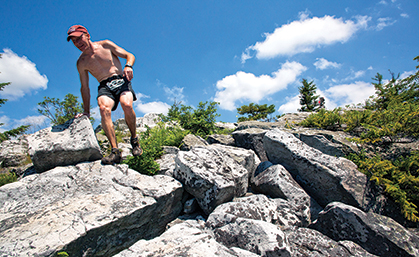 For 15 years, Trail Runner Magazine has worked to inspire and inform you with the best stories and photos from the greater trail-running community—and, for the past 10 years, our Trophy Series has helped foster that community through the largest point-based trail-running race series in North America.

We invite you to celebrate our 10th anniversary this year with us and 30,000+ other dirt-loving trail runners. Here are 10 good reasons to join the party!

1. Get motivated. There’s nothing like slating a race into your calendar to inspire you to get out and run. Check out our 2014 Trophy Series Race Calendar and pencil in a race or two to your schedule before they sell out. The Series kicks off with Bound the Mound 5K, 10K and Half Marathon in Evansville, Indiana on March 1.

2. Discover great trails in your backyard. With 150 North American races in the 2014 Trophy Series, there is bound to be at least one in your neck of the woods—if not more. How many TS races are near you?

3. Or, make a road trip out of it. Jonesin’ to experience some new terrain? All Trophy Series races are independently organized, so they’re a great opportunity to get introduced to the local trail-running scene in any new destination(s) you might want to visit this year.

4. Win incredible gear—no matter how fast you are. Our plethora of terrific sponsors help us give away great swag all season long, including trail-running shoes, headlamps, hydration packs, apparel, giftcards and more. (See the complete 2014 prize list on the right-hand sidebar of this page.) Every week, we do a random prize giveaway to a lucky Trophy Series participant, through our Facebook page—any TS participant can throw his/her name in the hat! At the end of the season, overall and age-group winners, as well as two randomly selected Series participants, also receive complete prize packs from our sponsors. 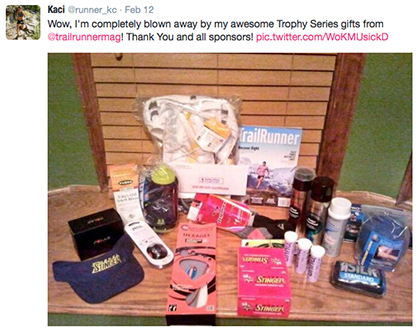 A great Tweet from Kaci Lickteig, 27, of Omaha, Nebraska, who won the 2013 Female Ultra Division.

6. Be rewarded for your strengths. The Trophy Series has many different racer categories that everyone has a chance to shine. Our ultra division rewards those who love to run long, while our non-ultra division is broken up into further age groups to recognize speed and talent all over the spectrum.

7. Get famous. You don’t have to run six-minute miles to find yourself on the Trophy Series leaderboard at some point during the season. We do monthly Series updates on trailrunnermag.com and love to do Q&A’s with age-group and overall leaders throughout the season! Keep an eye out for a full Series roundup in the pages of Trail Runner Magazine. 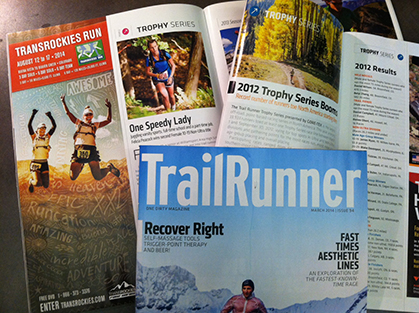 8. Make new friends. With over 30,000 participants each year in the Trophy Series, you’re bound to meet some new buddies wherever you run.

9. Expand your horizons. Do you have a favorite race distance you run over and over again? Change it up this year by stepping out of your comfort zone and tackling a different distance—maybe running your first ultra or, if you’ve been knocking out ultras like nobody’s business, give those fast-twitch muscle fibers a little challenge by putting some non-ultra races on your calendar. Or, guarantee yourself a new PR by running an oddball-distance race like Church Hill, Tennessee’s 11-mile Laurel Run Ascent, Kansas City’s 44.4-mile Brew to Brew, or Moab, Utah’s 6.5-mile, 9.5-mile and 15.5-mile Amasa races.

10.  It’s the Trophy Series’ 10th birthday! What more reason do you need to join the party this year? Get race shopping.