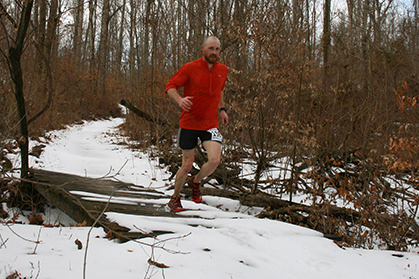 Less than two months into the 10th annual Trail Runner Trophy Series (23 races down, 126 to go!), no runner has racked up non-ultra series points as fast as Greg Fraze, 36, of Velpen, Indiana. An avid cyclist, Fraze fell in love with trail running in 2010 after doing the Bad to the Bone Duathlon (since renamed the Big Bone Lick Duathlon). He’s no stranger to the Trophy Series, having snagged last year’s title for the Men’s Non-Ultra 30-39 age group, running a total of nine Trophy Series races and earning 328.38 series points in 2013.

This year, he’s already run three Trophy Series races—nearly all on consecutive weekends—and acquired 97.3 points, giving him a comfortable lead in both his age-group category and the ‘Top Trail Fiend’ category for most Trophy Series races run overall. We spent a few minutes catching up with Fraze to see how he manages such a rigorous racing schedule.

(See page 2 for the full Trophy Series leader board.)

How many races do you typically participate in each year?
I probably do 2 or 3 races a month all year. I ride a bike and do duathlons as well. I mix up the races so I don’t get burnt out … and spend a lot more time cycling than running, which I believe has kept me from getting injured as much.

What does your training look like? Typical weekly mileage?
Usually 125-150 miles on my bike, and I try to get 20-25 miles running.

What do you do for work?
I run an offset printing press at my family’s print shop. Being my own boss is super nice so I can be flexible with my training.

What’s your favorite race in the Trophy Series?
My favorite race is the Land Between the Lakes 23K at Grand Rivers, KY, in early March. It’s a fun loop to run and I always enjoy talking with friends after my race and watching the longer race finishers come in.

What other Trophy Series races, or other running adventures, are you planning to do this year?
I’m looking forward to the Scenic City Half at Chattanooga this weekend and some other races in Illinois later in the year. A lot of the close races I did last year aren’t a part of the series this year, so I’ll get to look for some new races I haven’t run before and [take] more road trips.

2014 Trophy Series Leaderboard, as of April 2014
(May be missing some results that race directors have not yet submitted to us)

Want to find an upcoming Trophy Series race near you? Check out the race calendar.