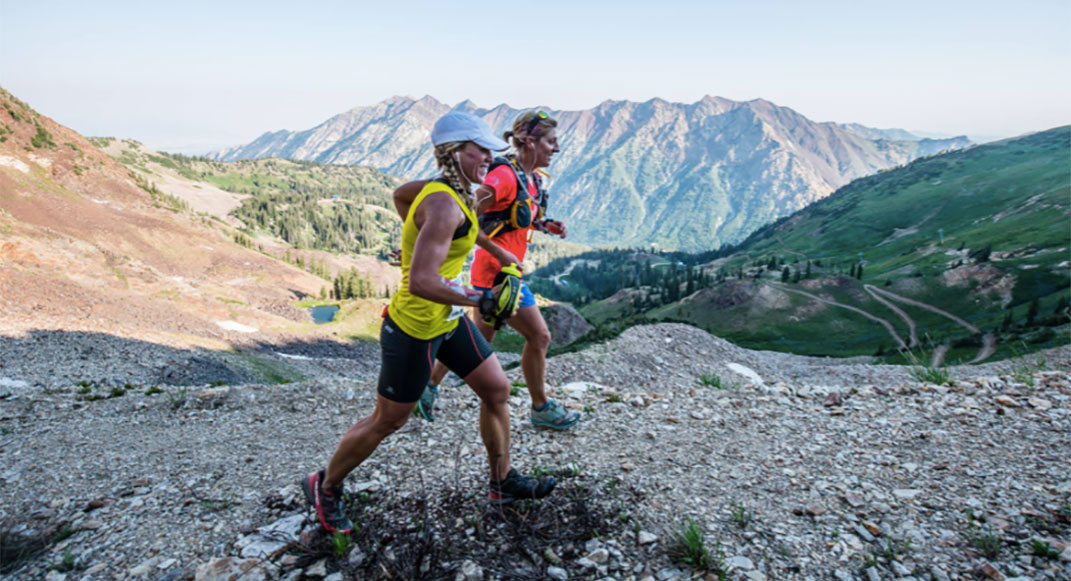 The race must go on!

That’s how Speedgoat trail race director Karl Meltzer sees it and apparently how most of Utah does, too. The ultrarunning legend and longtime race director decided this week to move forward with his 50K and 28K races on July 25, 2020, at Snowbird ski resort in the mountains southwest of Salt Lake City.

He’s not moving ahead in haste, belligerence or political angst. He just wants to put on his race and have runners enjoy it. And so far, Utah is one of the few states to allow some running races to return amid the Covid-19 pandemic.

Meltzer said he and his team have been meeting for weeks to develop new race-day protocols in accordance with gathering and event guidelines set forth by the Centers for Disease Control, the State of Utah and Salt Lake County. He’s also worked with Snowbird to understand and minimize any risks during the race weekend.

“I’m not the kind of guy who likes to sit back and wait to see what everyone else does,” Meltzer says. “We are going above and beyond what the CDC guidelines are with a lot of extra things. The way I see it, we should go ahead as if we’re going to have it, and if all of a sudden something changes and I’m told I can’t do it, a week out, then I have no control over it. But my position is that I’d rather try to make things happen than not.”

The way I see it, we should go ahead as if we’re going to have it, and if all of a sudden something changes and I’m told I can’t do it, a week out, then I have no control over it.

So far, runners are responding to Utah’s races. Vacation Races had about 500 runners participate in the five races at Bryce Canyon Ultras and more than 800 are signed up for its new race called the Zion At Night Small Group Half Marathon on the outskirts of Zion National Park on June 6-7, 2020, in the southwestern part of the state. That race has been specifically designed to offset Covid-19 risks.

The Squaw Peak 50 also recently announced it will be going forward with its race on June 13 near Provo, Utah, and has nearly 300 registered runners. Meanwhile 200 runners have signed up for the June 27 Bears Ears Ultra put on by Mad Moose Events in Monticello, Utah.

Registration for Meltzer’s Speedgoat races opened on June 2 had 134 runners signed up in the first three days. With a capacity of 700, he hopes to have room for anyone interested in racing. But as a way to not take registrants money that he might have to return in event of a cancelation, he’s pushing all registrants to the wait list on Ultrasignup.com until at least early July.

Most of the social-media discussion has been in favor of Meltzer’s approach, though a few runners, including three-time Speedgoat winner Sage Canaday, pointed out the concerns about runner interaction and runners traveling from other states

“I’m not nearly as worried about infecting others (or getting infected) from running outside around others … especially if passing people on those wide fire roads,” Canaday said in a response to one of Meltzer’s Facebook posts about the race. “But the aid stations and hotel/travel I see as bigger risks.”

Will Speedgoat Be The Summer’s Marquee Race?

Now in its 13th year, the Speedgoat 50K has earned a strong reputation as a hard mountain race since its inception in 2008, drawing some of the world’s top-tier runners. The winner’s list is like a who’s who of elite runners of the past decade, including Anton Krupicka, Kilian Jornet, Rickey Gates, Sage Canaday and course-record-holder Jim Walmsley on the men’s side and Anna Frost, Stephanie Howe Violett, Kelly Wolf, Anna Mae Flynn and course-record-holder Anita Ortiz on the women’s side.

But with few other domestic and international trail races happening this year, Speedgoat could be the marquee ultra race of the summer. Jared Hazen and Tim Tollefson are among the top names in the stacked men’s field, while Sandi Nypaver leads the women’s race.

“It could be the hottest race of the summer,” says Meltzer. “I’m trying to get Walmsley to come back and defend his record and get all of the big boys to come. Same with the women’s side. It’s sometimes harder to get a strong women’s field early, but a lot of fast women tend to just show up.”

Meltzer is planning on starting the slower runners in the 50K at 6 a.m. to allow them to spread out on a wide service road and to give the slower runners a better chance at meeting the mid-race cutoff time. The fast wave of runners will start 30 minutes later, followed by the 28K race at 8 a.m.

Meltzer and two of his key race managers, Pete Stoughton and Craig Lloyd, went to observe the Bryce Canyon Ultras put on by Vacation Races last weekend near Hatch, Utah, and came away with a lot of insights and good ideas—including the concept of rolling starts, clean aid-station execution and runner gathering. They’ll also be going to observe the Squaw Peak 50 next week.

At the Speedgoat races, volunteers wearing masks will fill hydration vessels with pitchers and pass out pre-packaged energy snacks, limiting the need for runners to touch anything. Meltzer and his team have created a three-page Covid-19 safety protocol with more than 40 points, including no drop bags, all registration on Friday evening, limited spectator and family access to the registration area and no awards ceremony.

What Is Going On With Other Races?

A few other states are starting to allow trail running races—and one happened on a private Colorado ranch—but the process for returning to normal is slow, especially given concerns about recent spikes in Covid-19 cases and the fear that another big wave could hit the U.S. in the fall. For now, a lot of races remain in limbo for the second half of the year, including several U.S. championship races.

Some trail-race directors have grown frustrated because there is no consistent understanding of what the parameters are for being able to hold a race. Nancy Hobbs, the executive director of ATRA, recently sent a letter to Colorado governor Jared Polis to help convene a task force to look into the safe return of trail-running races.

We’re all working together to make it happen,” says Meltzer. “We’ve gotta move forward. It’s easy to say, ‘F*** it!’ and walk away like other races did, but I want to make it happen and I know we can.

“We’ll see what becomes of that, but I think it’s important to promote the return of trail races,” Hobbs said. “I have been in touch with several race directors and several have said they are frustrated that no one is advocating for them.“

Meltzer said he understands why so many big trail races wound up being postponed or canceled this spring and summer—including Chuckanut 50K, The Dipsea, Western States 100, Hardrock 100, Broken Arrow Skyrace and the Leadville Trail Marathon, Silver Rush 50 and the Leadville 100—but he believes Speegoat can—and should—go on if local and state officials allow it.

“We’re all working together to make it happen,” says Meltzer. “We’ve gotta move forward. It’s easy to say, ‘F*** it!’ and walk away like other races did, but I want to make it happen and I know we can.”