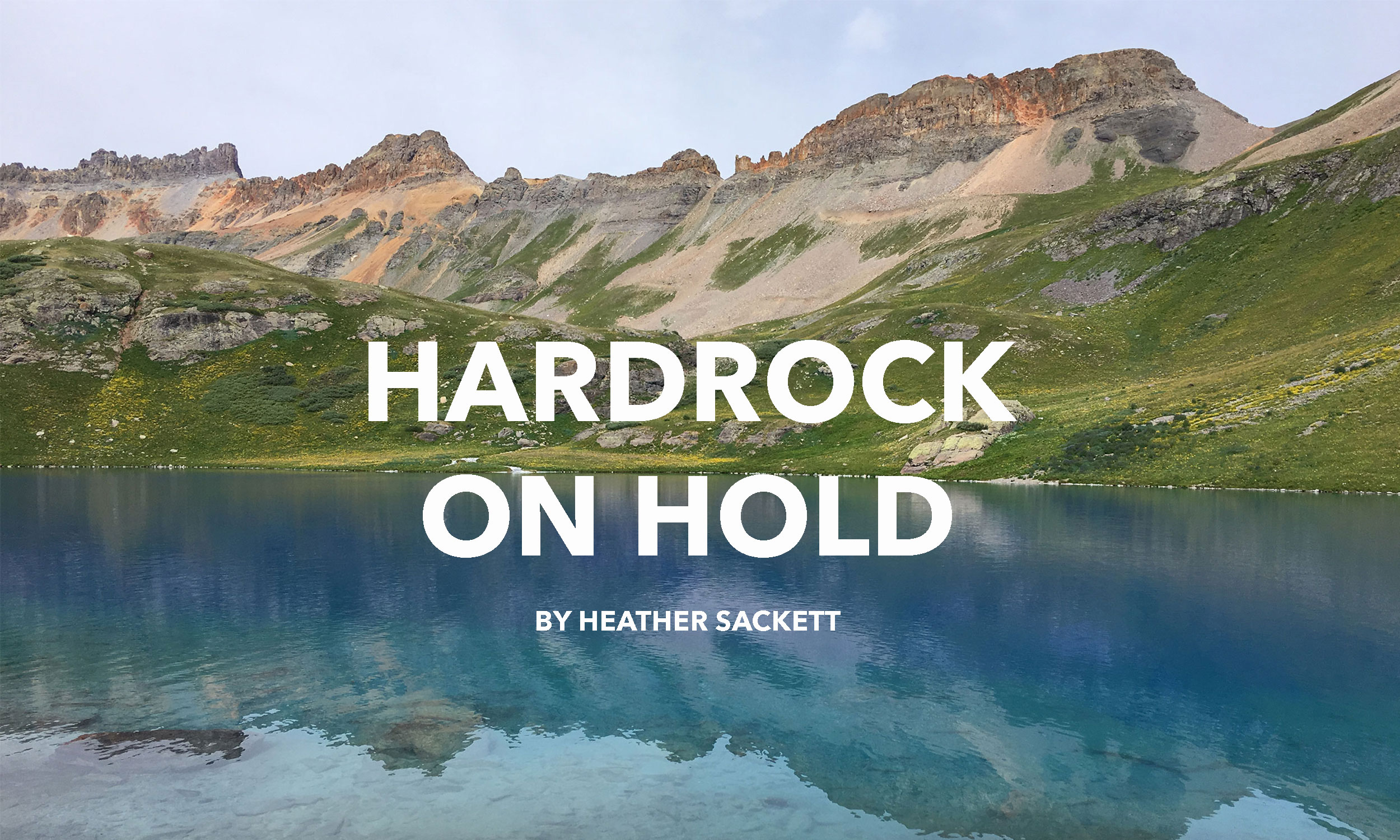 One of the stellar views from the Hardrock course. Photo by Megan Janssen.

If race organizers were to hold the Hardrock Hundred Endurance Run right now, in the second week of June, only three aid stations—Telluride, Ouray and Sherman—would be accessible. The rest remain buried under feet of snow and avalanche debris.

These kinds of dangerous backcountry conditions that are lingering after an historically snowy winter in Colorado’s San Juan Mountains are what led organizers to cancel this year’s race, which was scheduled for July 19. After weighing factors like runner and volunteer safety, and the event’s economic impact to the remote mountain town of Silverton, the run committee decided they could not safely hold the race. Last month, organizers of the 50-mile San Juan Solstice in neighboring Lake City cancelled this year’s race for the first time ever for similar reasons.

"If the question is whether the Hardrock organizers made the right decision, I think it's crystal clear that they did. First, there is the safety factor. There are some parts of that course that will raise the skin on the back of your neck in bone-dry conditions. With deep, steeply pitched snowfields like you'll find in July this year, it's easy to envision an accident happening.

"Then there's the high water—there are many backcountry water crossings at Hardrock, many of which could be perilous. Finally, and certainly not to be overlooked, you need to consider the mountain communities that the races passes through. With all of the avalanche debris and record-level snows, they're saying that the flooding could be terrible, even destructive. Town resources and emergency crews need to be pointed at helping those folks.

"There's naturally the personal side to this. Of course I'm bummed to not be running it. At the same time, I'm looking at it as a gift—I mean, who except for the previous year's winners gets an entire year to train for the Hardrock 100? I will have no excuse for showing up in 2020 out of shape. Time to head out for a run." 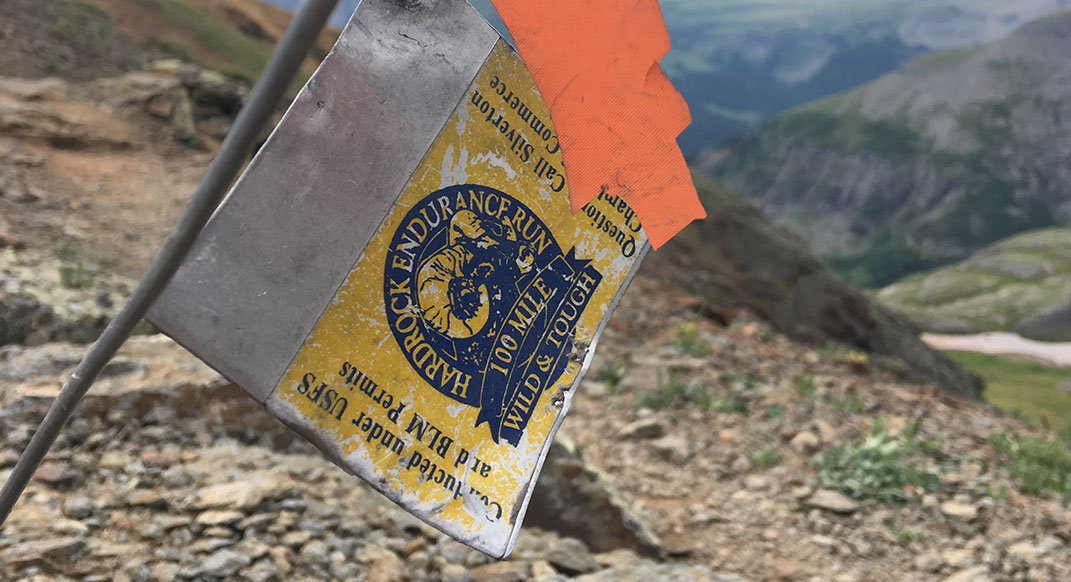 A marker along the Hardrock course

“In 25 years of directing Hardrock I have never seen this much snow and avalanche debris at this point in the year,” said race director Dale Garland. “For us that was a huge cautionary flag because of the amount of downed timber and what happens when people try to go through it.”

Hardrock is a punishing 100-mile tour through some of the Rocky Mountains’ most scenic and challenging terrain. The race is notoriously hard to get into and even harder to complete—runners who cross the finish line around the average time of 41 hours will have taken on 66,000 feet of elevation change and seen the sun set twice before they are done. Hardrock attracts some of the best ultrarunners in the world and legendary mountain athlete Kilian Jornet has won the event four times (tying in 2016 with Jason Schlarb).

"As a resident of Durango, which is 50 miles from Silverton, I really enjoyed this winter of well-above-average snowfall. After the devastatingly dry 2018 and subsequently horrible fire season last year, everyone celebrated a big winter. I skied a lot with Meredith (my partner) and Felix (our dog), I plowed through an overhead snow pack at our cabin at 8,100ft and, just really enjoyed the experience of a big snow year.

"It is always a game of anticipation and waiting as the snow melts in the San Juan mountains of Colorado before the Hardrock 100. As spring became more of a late winter, I had to travel to New Mexico to enjoy trails with any real elevation change. We made an extended trip to the Grand Canyon to train at the end of April, and gradually I realized and finally accepted that the Hardrock 100 wasn't likely to happen. With that acceptance, I appreciate the benefits (less fire danger, more ground water, beautiful vegetation, etc.) of that water, and that I get the opportunity you do something new this summer. And it is comforting knowing that I will be an auto entry in 2020.

"I am also sad. Sad that the Hardrock community doesn't get to run and be together, sad that the Silverton community will suffer economically, sad for the fact that the damage and inaccessibility to the trails won't be fixed for a long while. Lastly, I'm sad that I don't get to be a part of the most competitive line-up at Hardrock ever this year … maybe next year."

The winter’s heavy snows and avalanches that followed have transformed the landscape and trails of southwestern Colorado in some places. This was the third-wettest winter since measurements began about 30 years ago in the San Miguel, Dolores, Animas and San Juan River basins.

In normal years, Hardrock uses the snow-water equivalent (SWE), measured at the Red Mountain Pass SNOTEL site as the main data point to determine whether the race will take place. If the SWE is equal to or less than 23 inches by June 1, the race is a go. As of June 10, the SWE at the Red Mountain SNOTEL site still hovered above that cutoff at 24 inches, and the site was still buried under four-and-a-half feet of snow.

Recognizing that using just this one SNOTEL data point wouldn’t cut it to make a decision in a year that saw historic avalanches throughout the state, organizers enlisted the help of runners in the Silverton area to share their first-hand, on-the-ground accounts of course conditions. One of those was iRunFar’s Bryon Powell, who has lived in Silverton since March and completed Hardrock three times. He was also entered into this year’s race.

“There’s not a whole lot of running trails if you’re based in Silverton right now,” Powell said. 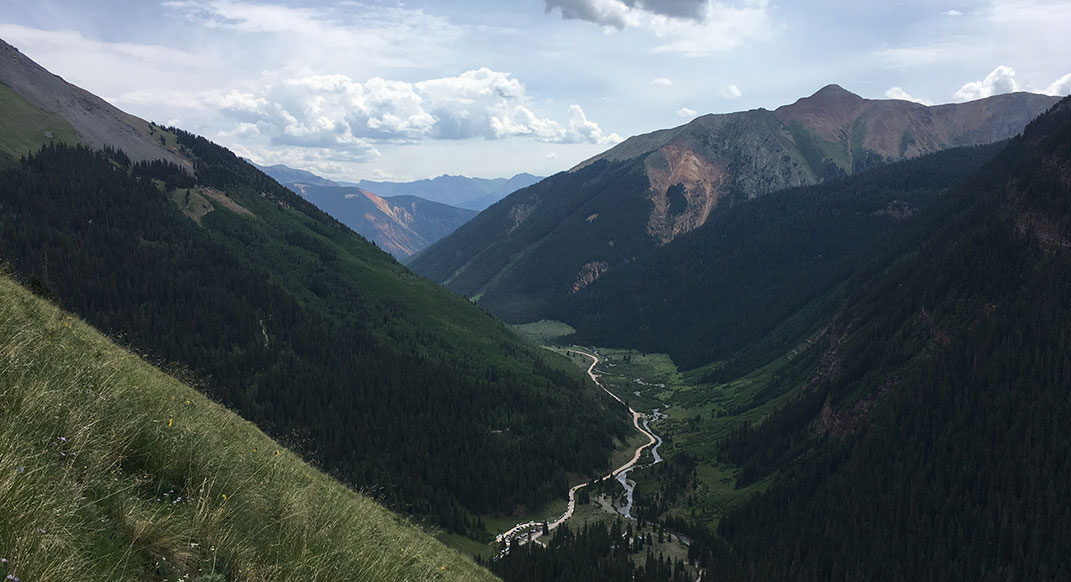 "Silverton was an amazing place to spend the winter this year. Last year was horribly dry and fire plagued. The normal lush green alpine tundra was crispy and brownish, and the wildflowers were weak compared to normal. The air was hazy and thick with acrid smoke. It was a sad state of affairs the summer of 2018, and it hardly seemed like what you looked forward to every year for the race.

"Fast forward to the winter of 2019 and it was a completely different experience. It was awesome to see the power of nature as she delivered storm after storm, blanketing the area with record snows and avalanche activity. There were so many times this winter that Silverton got cut off from both sides with the rest of civilization due to slides or avalanche work on Highway 550. One major slide, which resulted in a viral video , closed us off from Ouray for over two weeks, as the road was covered in up to 60 feet of snow. The weather let up a bit in April, but May was a brutal month—the snows and cold days returned with a vengeance.

"It became clear that holding Hardrock could be a serious issue. Surveying the mining roads by truck, you really started to get a sense of the avalanche activity—thousands upon thousands of trees were ripped from the ground and snapped like toothpicks. Many roads to the aid stations were buried under deep piles of avalanche debris, and they were even estimating a late July opening for the road to Grouse Gulch, as there may have been up to 100 feet of snow on the road from avalanches.

"So that brings us to the cancelling of the race. Yes, it is a huge let down. But at the same time, I truly feel the forest was speaking to us. It needed a break. From runners, tourists, ATVs. Nature bats last, and she hit a grand slam this year. The mountains deserve some peace. The tundra will be a lush green when the snows recede, the wildflowers plentiful, and the creeks, rivers and lakes will be overflowing with glorious water that was absent last year.

"I will miss the tribe coming to town. Seeing old friends, making new friends. There is such an excitement and buzz during the buildup to Hardrock. There is no other race like it in the world where people gather for weeks or months to celebrate these mountains and friendships and bonds they create. I’ll miss Dale [Garland] and his boundless energy and enthusiasm at the pre-race meeting. The excitement of race morning. The joy and honor of running the loop. The people, the volunteers. The raging storms. And pushing through it all to make that final right turn to see the rock waiting for you along with Dale and everyone else. "But alas, it is only one year. The rock will return. Dale and the people of Hardrock will be back. The mountains will be ready to host us once again. And in the meantime, the mountains are here, waking from their long slumber. A race isn’t needed to enjoy them in all their majesty. They will be here for you, to fill your heart and soul with whatever it is you seek from them."

The recent warm, sunny days in the Silverton valley may give a false sense of optimism about backcountry conditions, Powell said. But in reality, gulches are filled with splintered spruce and aspen, which makes access to some trails difficult if not impossible.

“There are a couple of short stretches of single track, but all the high country is snowed in down to 10,000 feet,” Powell said.

That’s a problem since the average elevation of Hardrock is around 11,000 feet and includes summiting 14,058-foot Handies Peak.

“I’ve been coming out since 2015 pretty early in the season and my normal benchmarks of where you can get to, you can’t get anywhere close right now.”

Although the annual “wild and tough” race through the San Juan’s rugged peaks, lofty mountain meadows and scree fields won’t take place in 2019, organizers will still hold a version of Camp Hardrock in July. The gathering of ultrarunners in the days leading up to the race includes panel discussions, potluck dinners, film screenings, seminars and historical walking tours.

“Community is a really important part of Hardrock and so let’s celebrate that community even though we aren’t going to have an event,” Garland said.

This year, participants can add another activity to the Camp Hardrock schedule: extensive trail work clearing downed trees. One of Hardrock’s entry requirements is a public service component, which includes work on trails used by an ultrarunning event.

“We would be able to do some things that the BLM and Forest Service, who holds our permits, won’t be able to get to, like cleaning up Cunningham Gulch Aid Station, which is under snow and avalanche debris,” Garland said.

Lucky runners who won a spot in the 2019 race will have the option of either rolling over their entry into the 2020 Hardrock 100 or receiving a full refund of their entry fee. The waitlist will also roll over to next year and there will not be a lottery drawing for the 2020 race. Next year’s event will also be run in a counter-clockwise direction, the same direction as was scheduled in 2019.

“Basically, we took everything from 2019 and moved it to 2020,” Garland said. “It’s important that people know we struggled with this decision. It’s not something we took lightly because we know people have made a yearlong commitment to do this.”

Great article, thanks TrailRunner. One small correction – Kilian has been first finisher 4 times, not 3. (One of those was a tie with Jason Schlarb.)

Thanks for the correction.

Good read. Couldn’t agree more that the area needed this past winter in a bad way. Should rejuvenate the whole place.

People could still make the trip, do some running, and support the community economically. Stay off the dangerous trails but still make it a non-hardrock running party weekend. Who’s in?