When it comes to jaw-dropping trails, Colorado is a state preceded by its reputation. It’s home to many beloved trail races—Hardrock, Leadville, Run Rabbit Run, TransRockies, Imogene Pass, Pikes Peak Ascent and Marathon, the Grand Traverse, to name just a few—many of which have introduced runners from all over the world to some of Colorado’s finest mountain towns.

Many of those towns are also home to fantastic craft breweries—and if you’re anything like me, there’s little that quenches post-run thirst as satisfyingly as a cold beer under the bright Colorado sun. In fact, I’m so enamored with that combination that I spent an entire season road-tripping all over the state to hike/run 50 trails, visit 50 breweries, and compile them all into a guidebook called Beer Hiking Colorado. (You can ignore the “hiking” part; every good trail runner knows hiking guidebooks are trail-running guidebooks in disguise. Plus, it’s still a fun resource for chill days in the mountains with your non-runner friends, family or spouse.)

To whet your appetite for “beer trail running,” here are five of my top trail/beer combos from the book, specially hand-selected for runners.

“Pride of the West” is a term to describe many things—a now-defunct dive bar in the historically rowdy miners’ town of Silverton (home to the Hardrock Endurance Run), the sweet porter that awaits you at the end of this hike at Avalanche Brewing Company, or the San Juan Mountains themselves—arguably one of the most impressive mountain ranges in the country.

The trailhead for Highland Mary Lakes takes a little more work than others to reach, which is perhaps why this unbelievable, high-alpine loop remains less crowded than other trails in the San Juans. On your run, you’ll pass everything from pristine waterfalls to meadows blanketed in wildflowers to a number of shimmering lakes. Glimpse the iconic jagged teeth of the Grenadier range’s Arrow and Vestal peaks and enjoy high-fiving thru-hikers on a short shared stretch of the Continental Divide Trail (CDT) and Colorado Trail.

Avalanche Brewing Company is situated in downtown Silverton on Blair Street, an old dirt road notorious for its rowdy history of saloons, bordellos, and dance halls. Housed inside a quaint, kitschy house reminiscent of a ski-bum shack, Avalanche serves up its own crafted “elevated ales” alongside breakfast, lunch, and artisan thick-crust pizza. Grab a seat on the porch for a front-seat view of Kendall Mountain. Their sweet, rich Pride of the West Porter has a dark brown caramel hue, coffee/toffee nose, and chocolate and roasted malt flavor profile.

Take a tour across the top of a 60-million-year-old mesa, formed by lava, that’s now home to raptors, rattlesnakes, and panoramic views. The brewery is literally at the trailhead.

With bluffs and geologic formations beckoning to be explored, the 2,000-acre North Table Mountain Park looms over downtown Golden. Multiple trailheads lead to some 17 miles of trails set over the park’s dry, desert-landscape mesa, so check out a map before you start. (And don’t forget to lather on sunscreen! Spring, fall, and even winter—depending on snow conditions—are all good seasons to take advantage of these trails.) This lollipop loop offers a good tour of the eastern side of the park, which tends to be a bit quieter than the western side. The mesa that sits at the heart of the park was formed by lava flows thought to have occurred some 60 million years ago. To reach the expansive, flat top of the mesa, you’ll climb up a dramatic drainage toward towering bluffs. Keep an eye out overhead as you climb for raptors such as hawks, eagles, and falcons.

With a motto like “For those who wander” and a location tucked away on the fringes of Golden’s North Table Mountain Park, New Terrain Brewing Company is a no-brainer destination for all the hikers, trail runners, and mountain bikers who frequent the nearby trails. Opened by beer-industry professionals in 2016, the thirty-barrel brewhouse, taproom, and beer garden (complete with farm-to-fork food-truck cuisine) offer terrific views of the local foothills. Their Cruise Ride American Cream Ale pours hazy golden, has a sweet biscuity nose, and a smooth, tart lemon flavor profile.

This sunny ramble through a historic valley calls for treating your toes to a dip in Mad Creek and your taste buds to a refreshing Kölsch named in honor of the trail.

This classic trail just outside of Steamboat Springs has a lot to offer—relatively easy running, expansive views, aspen groves, a picturesque creek perfect for picnicking, and a few historic curiosities along the way. Enjoy the gurgle of the creek below to your right as you traverse the hillside and enter a short, forested stretch. In the summer, wildflowers dot these expansive meadows. Come fall, the surrounding hillsides are blanketed in fiery scrub oak and vivid, yellow aspen leaves. Before long, you’ll pop back out of the trees on an easy, flat path and visit the century-old Mad Creek Barn, built in 1906. Setting foot inside is like stepping back in time.

Owned and operated by a self-described “family of beer freaks, music lovers, and outdoor enthusiasts,” Storm Peak Brewing sports a seven-barrel brew house and casual, garage-style taproom. It specializes in creative, small-batch brews, so regardless of whether your trail run’s eponymous ale is on tap when you visit, treat yourself to a taster flight of whichever of the rotating options are fresh in the kegs. (If the Mad Creek Kölsch is on tap, though, enjoy its pale gold hue, straw/grain nose, and crisp, delicate malt flavor.)

Just a hop, skip and a jump from the site of the Leadville Trail 100’s May Queen Aid Station, this relaxing trail through lush forest in the Holy Cross Wilderness area takes you to a secluded lake more than two miles above sea level.

The highest incorporated city in North America at 10,152 feet, Leadville is known for its numerous lakes. Several of them, including Turquoise Lake and Twin Lakes, adorn the routes of Leadville’s celebrated endurance races. However, beyond these well-known and much-loved landmarks lie a number of quieter, less visited lakes. One of the most pristine is Timberline Lake, nestled away in the Holy Cross Wilderness, beckoning you to escape the summer jeeping, cycling, and racing crowds. You can even camp along its shores, as a number of secluded backcountry campsites dot the water’s edge.

By Colorado standards, the trail is a mellow one, meandering at a gentle grade through lush woods before emerging at the lake. Take a breather or enjoy a picnic at its shores, or meander as long as you like by following an increasingly faint trail around the west side of the lake to a marshy meadow beneath an eye-popping cirque.

Calling itself the “World’s Highest Craft Brewery” at an elevation of 10,156 feet, Periodic Brewing opened its doors in 2015. (For six years prior, the old mining town of Leadville had been devoid of a brewery.) Its creations span the spectrum from a light Kölsch to a hoppy IPA to this rich Scotch Ale. Their logo sports the letters “Pb,” which double as an abbreviation for the brewery’s initials and, cleverly, the symbol for the element of lead on the periodic table—get it? The Practice Parade Scotch Ale pours mahogany, features a burnt toast nose, and tastes of sweet malt and caramel.

(2 miles, with many options to extend; 875 ft. elevation gain; strenuous)

What Colorado trail-running listicle would be complete without a shoutout to Trail Runner’s headquarters in Carbondale on the state’s western slope? Get up high above town on this lung-searing gut buster of a run and enjoy a front-row seat to admire one of Colorado’s most prominent peaks.

The aptly named Red Hill Special Recreation Management Area sits north of downtown Carbondale, a quaint, artsy mountain town nestled in ranching country at the foot of Colorado’s Elk Mountains. The area’s red rocks, sagebrush meadows, and juniper trees are home to some 19 miles of singletrack, as well as herds of deer and elk. From the trails that wind steeply up Red Hill’s southern-facing walls, you’ll enjoy many views—the town of Carbondale itself, the convergence of the mighty Roaring Fork and Crystal rivers, and poised in stunning prominence to the south, the frequently snow-capped Mount Sopris. With its twin summits clocking in at 12,965 feet, Sopris does not reach as high as many of its more famous neighboring 13er and 14er peaks, but its near 7,000 feet of relative prominence (the total elevation change from a peak’s base to its summit) make it one of the largest mountains in the contiguous United States. And there’s no better place from which to ogle the looming giant than Mushroom Rock, a beautiful red-rock formation you can clamber your way steeply up to on the southern flanks of Red Hill.

With a focus on seasonal, experimental small-batch beers, RFBC quickly outgrew its original space adjacent to Red Hill, so it has since expanded into a location downtown. The Batch tasting room sports 12 in-house taps with everything from barrel-aged brews to imperial IPAs and grapefruit- or watermelon-infused renditions of the Freestone Extra Pale Ale. Additionally, it features guest taps for other select Colorado craft beers, wines, hard cider, kombucha, craft sodas and even sake. The original Freestone Extra Pale Ale pours bright gold, smells of pine and earthy hopes, and features a dry, crisp, citrusy finish. 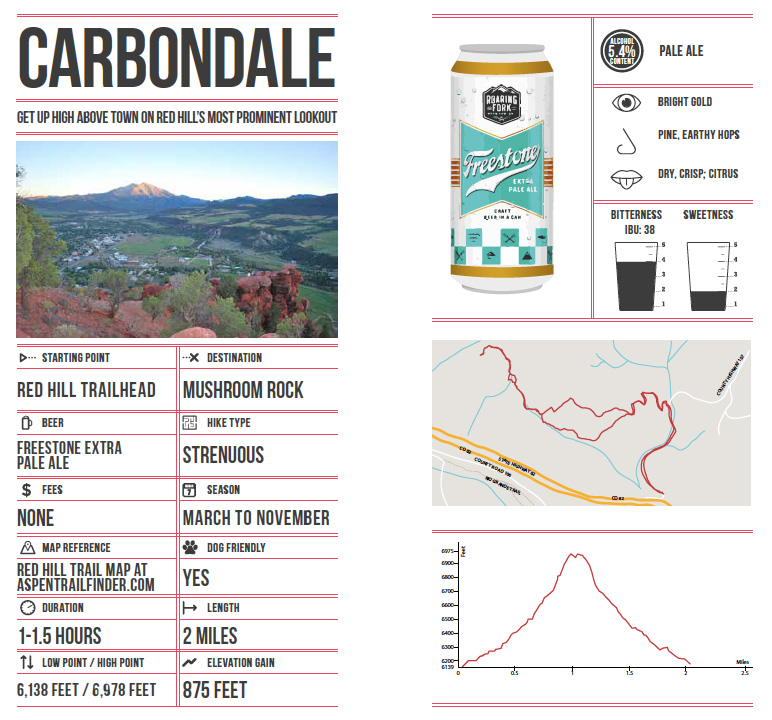 Check out some of the trail stats, as well as a peek at the inside of the book!

Yitka Winn is a contributing editor for Trail Runner. You can find Beer Hiking Colorado here or, after its official release on Dec. 3, most anywhere books are sold.

This is great! You should do an article like this for Utah!