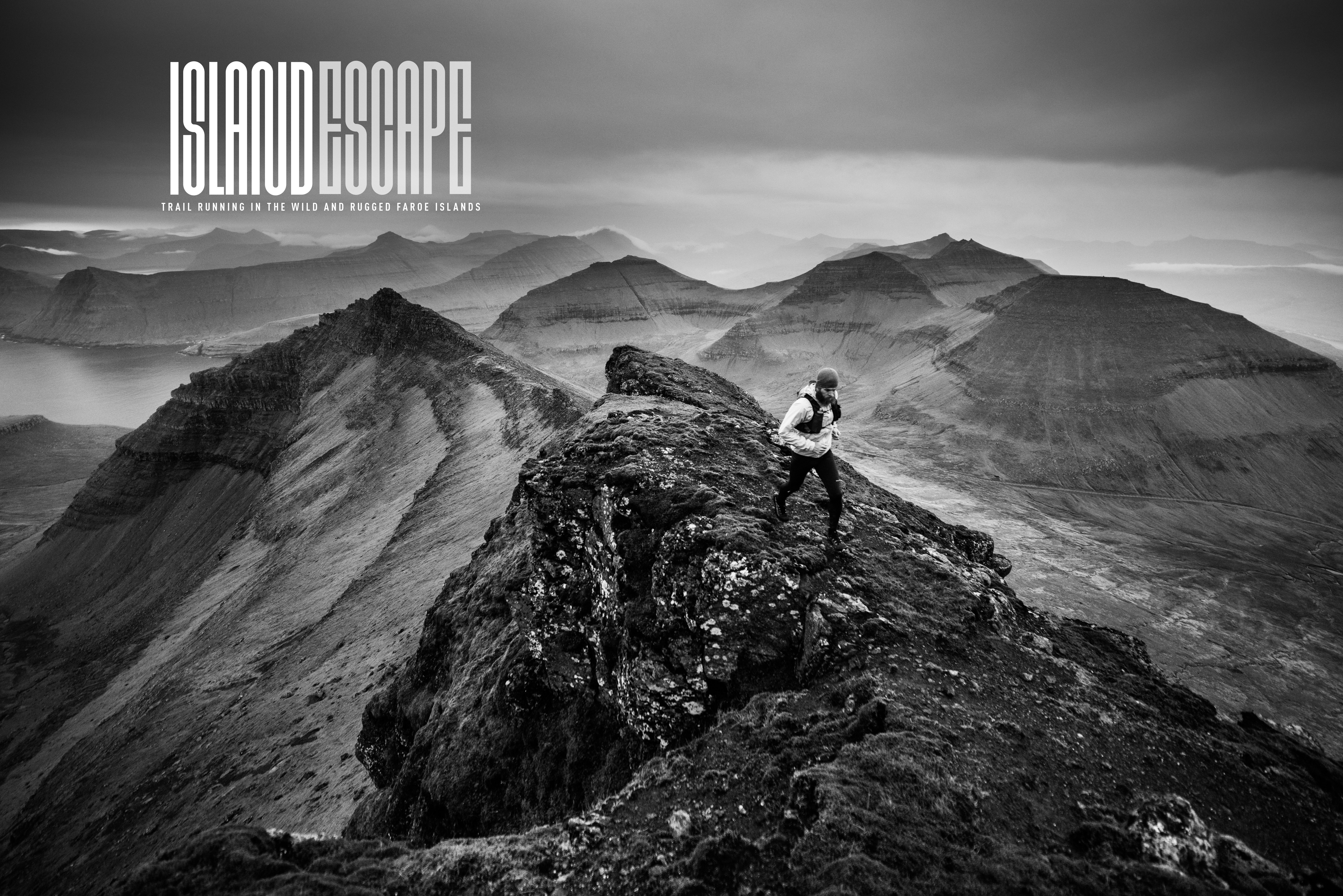 From Slaettaratindur, the Faroe’s highest peak, the islands and fjords feel as dramatic as they look.

As I struggled to take off my pants, I lost my balance and hit the partition of the bathroom stall. The space was small, and I was trying to change into running clothes in the men’s bathroom in the Vágar Airport. Moments prior, Inga and I had gotten off of our flight from Iceland and, with one glance outside at the gorgeous day, knew that Kelvin would be itching to get out to shoot photos before the sun set.

The Faroe Islands are a small island chain in the North Atlantic, partway between Iceland and Scotland. In October 2017, Inga Fanney, 35, of Reykjavik, Iceland, Kelvin Trautman, 34, of Cape Town, South Africa and I, 37, of Pocatello, Idaho, traveled from various parts of the globe to explore the running potential of the rugged islands, where jagged cliffs shoot straight out of the sea and low vegetation covers any surface it can cling to. 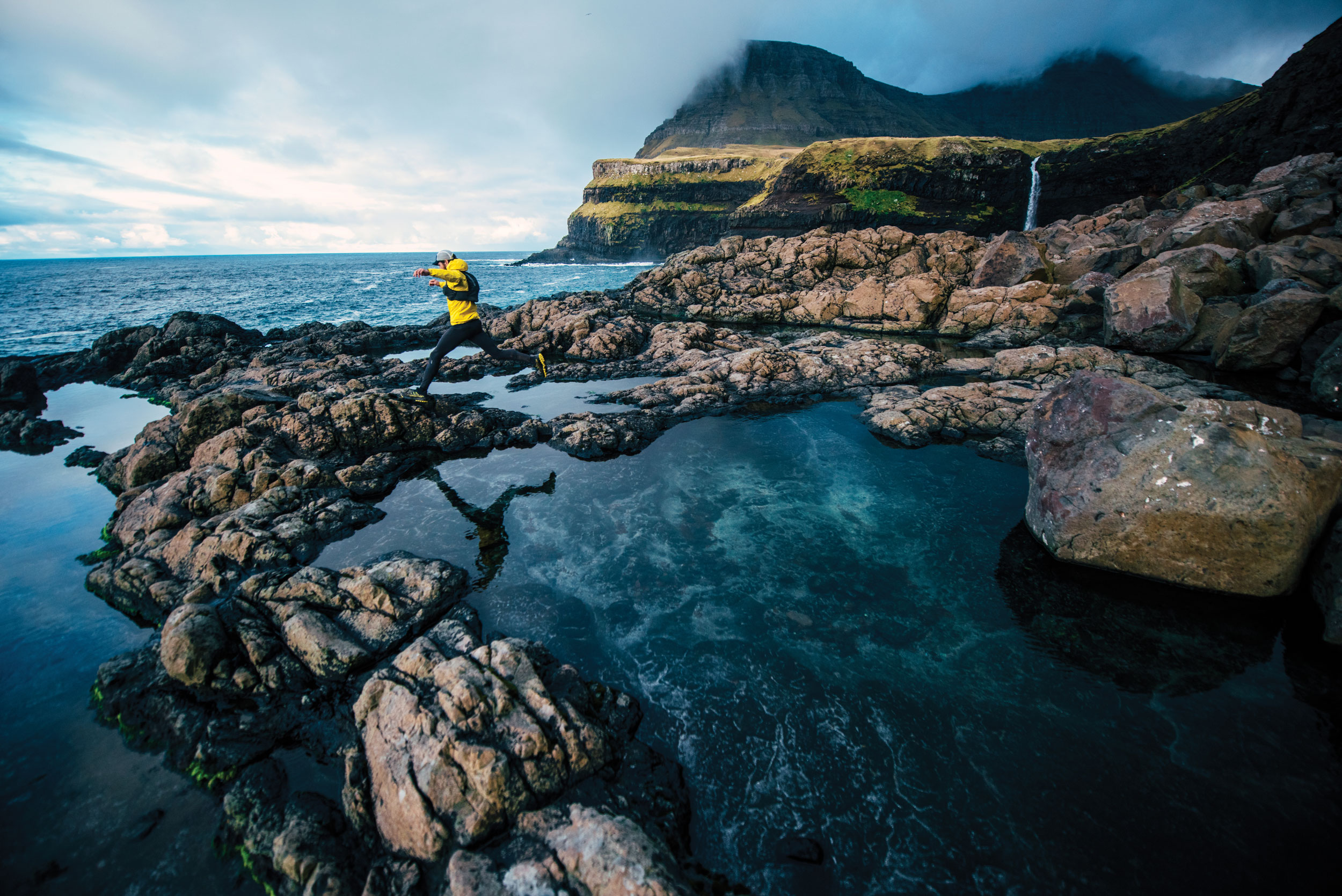 The mixing of fresh water and the sea creates an endless playground for technical running. 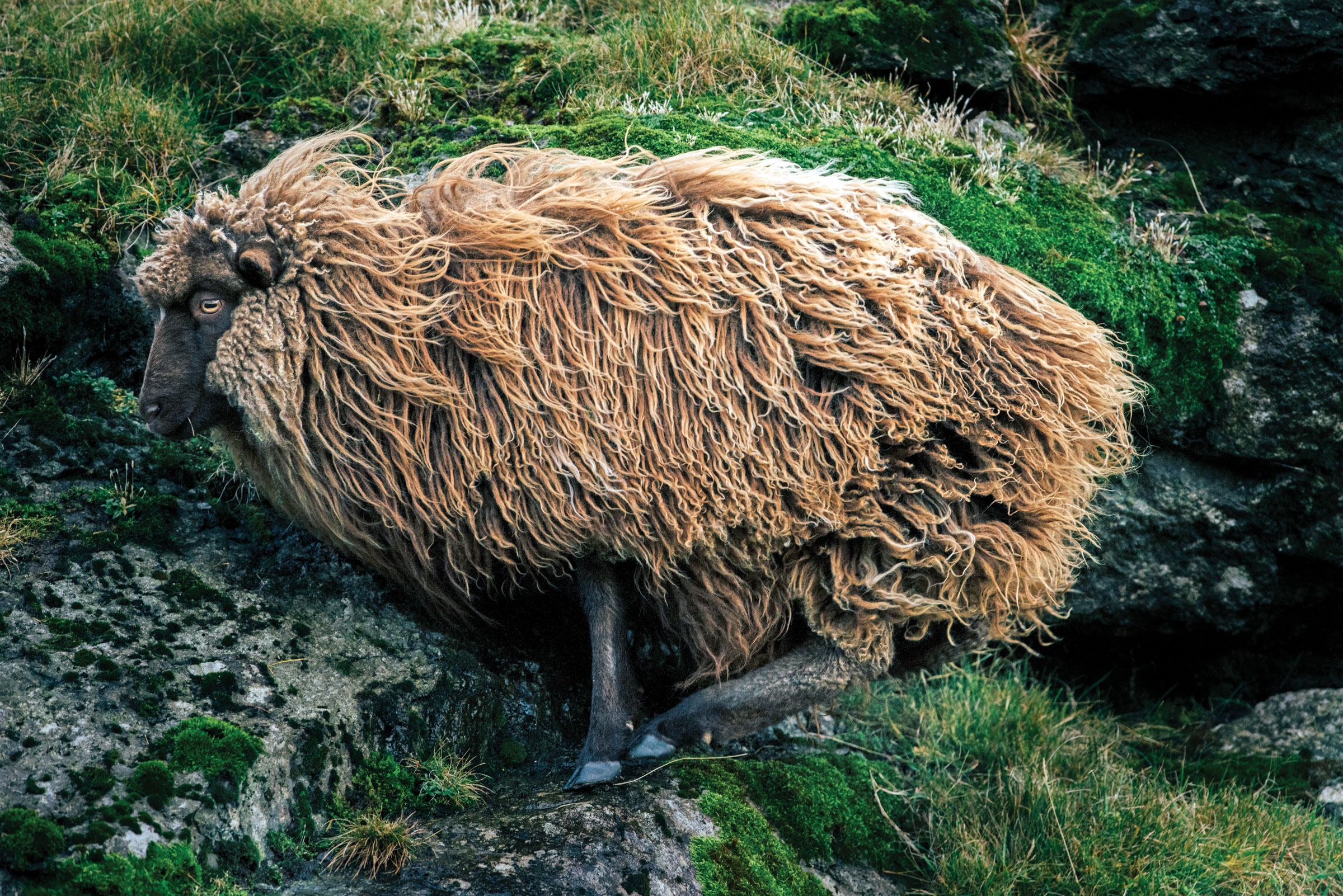 Barely six miles from the airport, we pulled off the two-lane highway at a small trailhead. As we ran from the car, legs heavy from travel, we were immediately met with wonder as we ran along the edge of a lake surrounded by mountains resembling rocky molars. Climbing away from the lake, we were greeted by a thousand-foot drop straight to the sea and a view of the edge of the lake itself tumbling off a cliff into the ocean. The light turned golden and then faded to blue as we witnessed the crashing ocean waves reach up for the freshwater falling to the sea. We had only been in the Faroes for a few hours and the beauty of the place had already exceeded expectations. 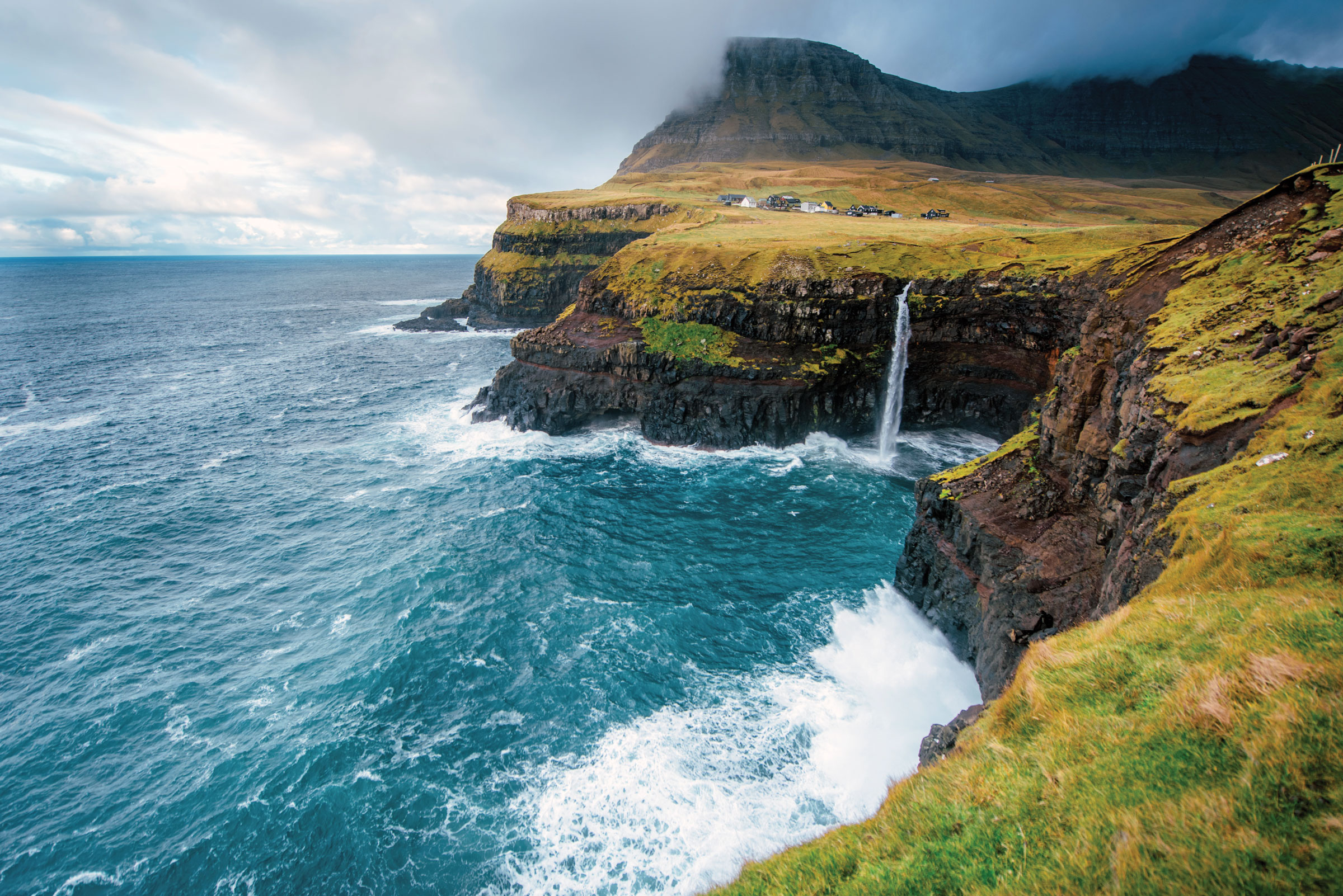 Mulafossur waterfall, near Gasagalur, best seen by approaching via the historic Postal Route.

The following day, after a bout of fitful, jet-lagged sleep, we drove through a combination of under-fjord tunnels to a neighboring island. We parked at a small church that overlooked an amazing bay, which was once a busy harbor until the entrance became too shallow for boats. An ascent past a small farm on a narrow path led us to broad, glacier-carved valleys surrounded by jagged peaks and rolling ridges. Our run led us to Tjørnuvik, a small city plucked straight from a postcard. It had an incredible surf break, hundreds of waterfalls as a backdrop and high peaks on three sides. Fish dried on the eaves of the houses, and grass sprung from the gutters. 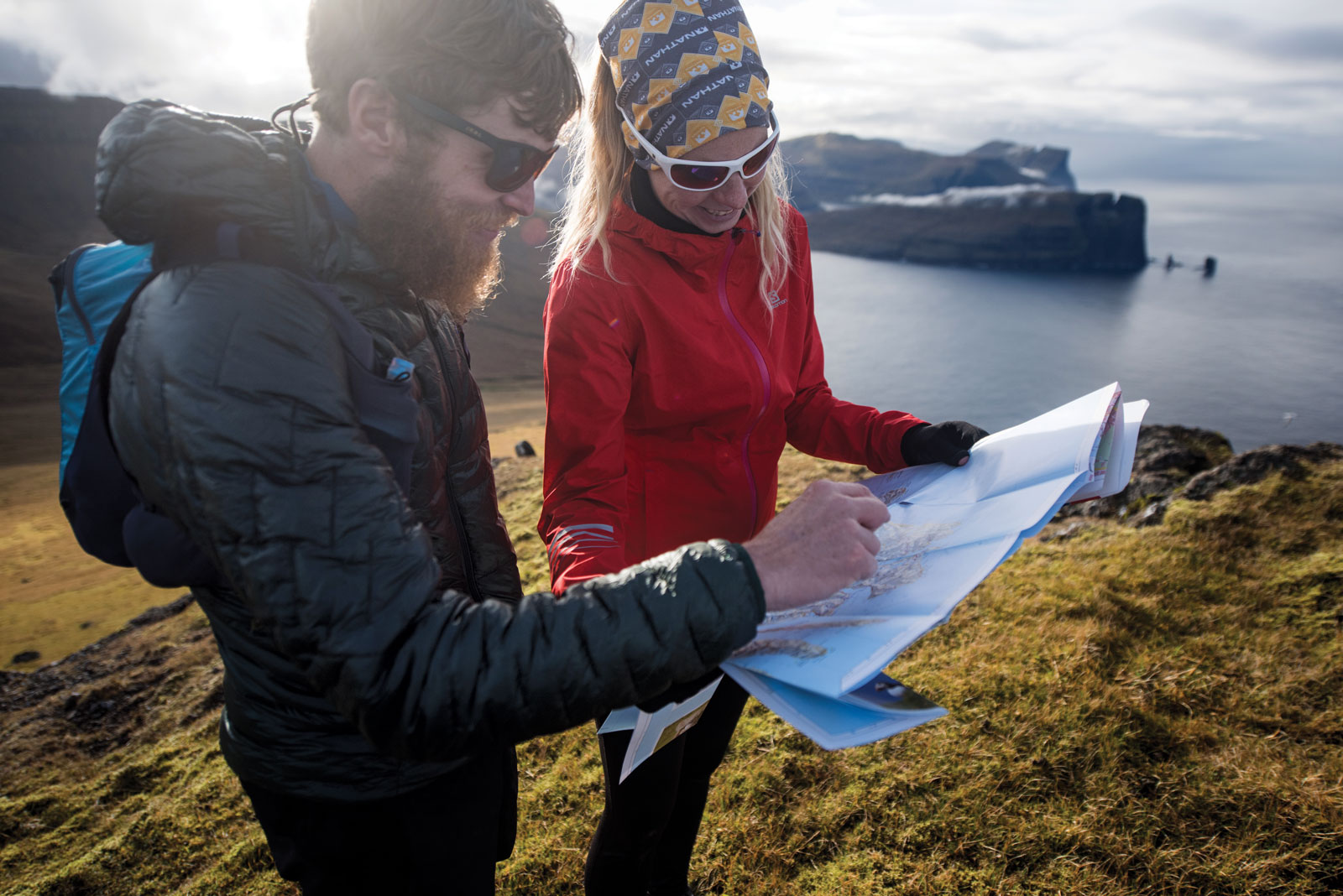 Our amazement grew as we traversed a small path back toward Saksun, where we had started the day. The route has been used by shepherds for centuries, and it led us to the edge of the precipice forming the boundary of land and sea, which we followed for several miles as we looped back to the car.

One particular mountain, with a long narrow summit, dominated the skyline and would be a familiar feature for the days to come. As we neared the car, I stopped at a small bench and sat listening to the mixture of crashing waves and waterfalls, a cacophony more soothing than perhaps any combination of sound I had ever experienced. 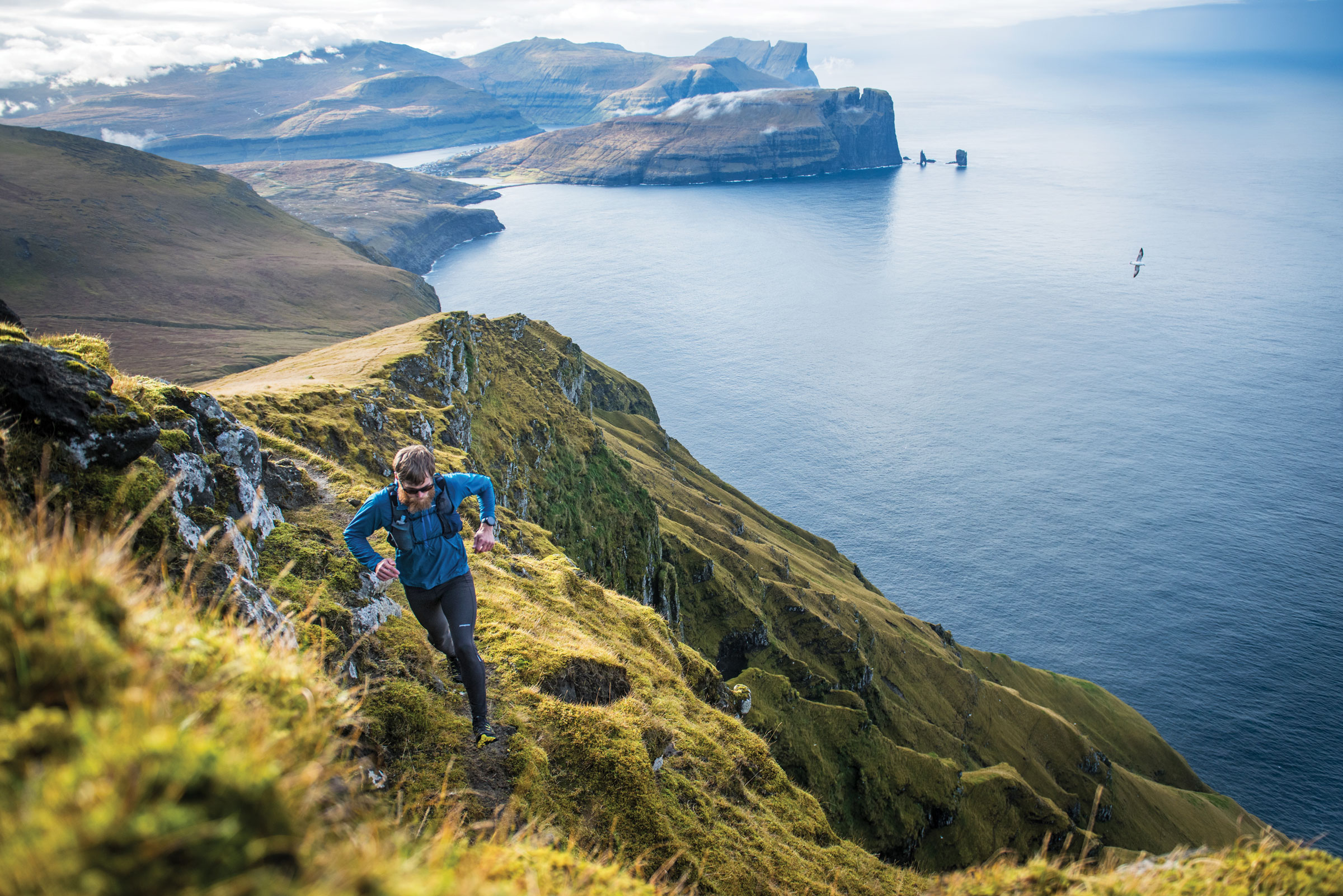 Dizzying exposure above mossy cliffs, with the Risin and Kellingin (the Giant and the Witch) in the background.

The objective for the next day was Slættaratindur, the tallest peak of the islands at 2,890 feet. Ocean, mist, waterfalls and peaks, arranged in impossible combinations, surrounded us, but views were limited by an incoming storm that also led to a hasty descent to the car. We drove to another island, where we explored an historic harbor and the tallest sea stack of the Islands, Búgvin. Large fulmars flew by the hundreds around the 620-foot tower. We wrapped up the run with hot chocolate and pancakes at a quaint hotel back in Gjógv. 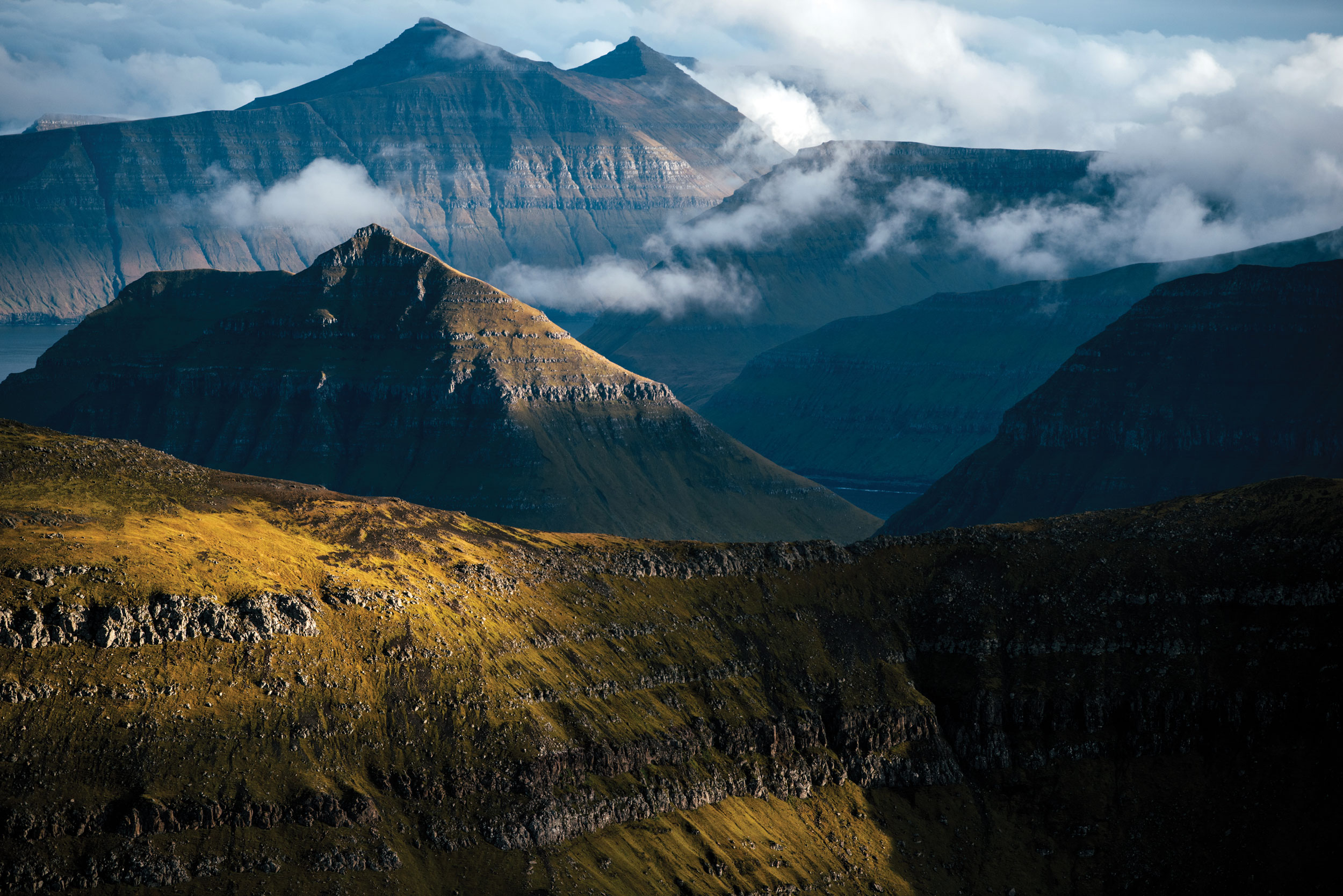 Layers of mountains on separate islands divided by fjords and the sea. 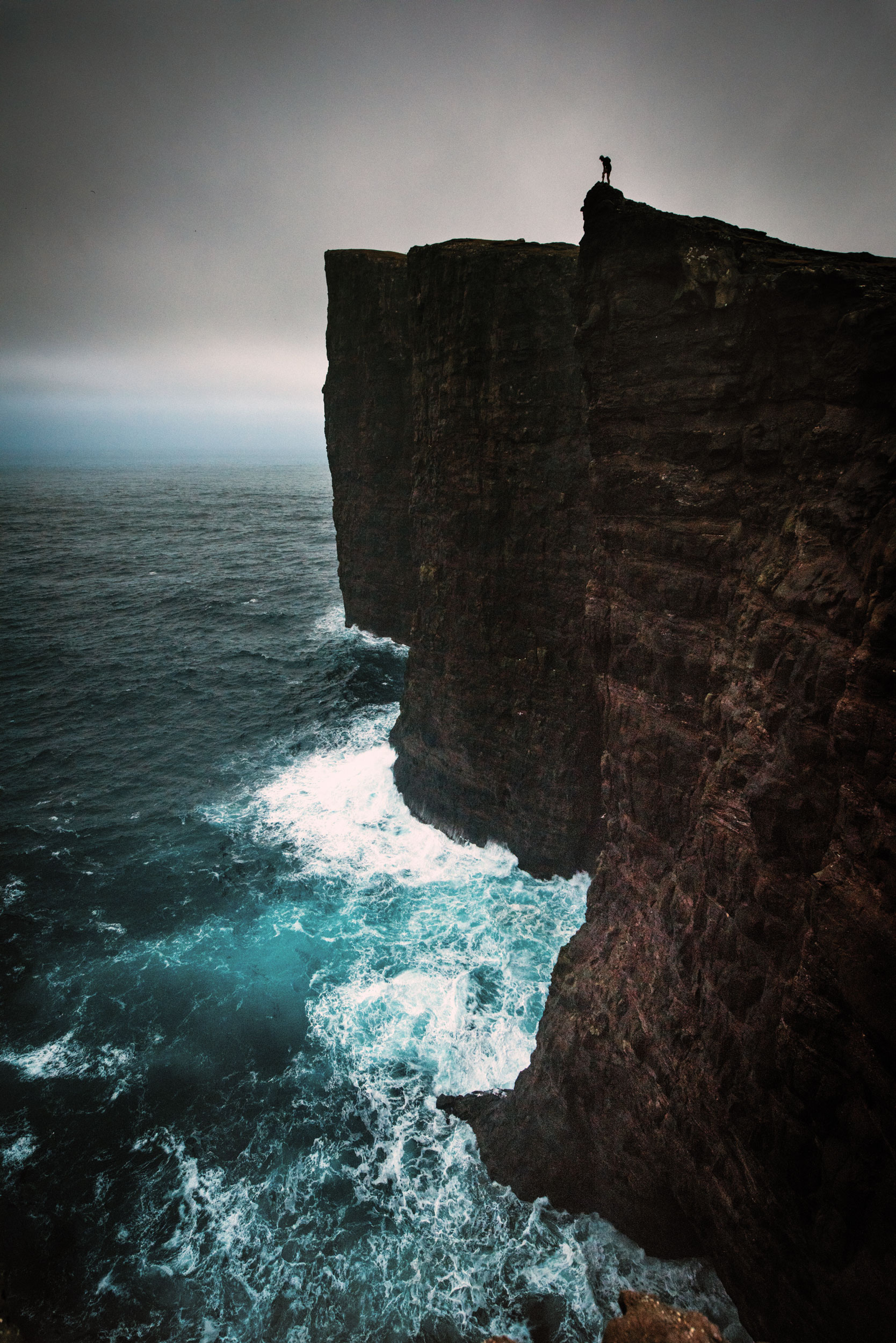 Standing on the edge of the world during the group’s first run in the Faroes, near Traelanípan.

Up until 10 years ago, the community of Gasadalur was only accessible by foot or by sea. That changed when a tunnel connected the town to the roads of the rest of the island. On our last full day in the Faroes, we opted to visit the town via the historic Postal Route, on which the postman would travel several times a week to deliver supplies and mail to the town. The trail climbed up and over a steep pass before dropping back down to near the ocean.

The town of maybe 100 buildings was quiet with the exception of a few bleating sheep. We ran past Mulafossur, an incredible waterfall that dropped straight to the sea, while only a couple of farmers noticed our passing. We took an alternate route back to the car, and Inga showed superior navigating skills in a thick fog that engulfed us.

Getting there From Iceland, Europe or the UK, use Scandinavian Airlines or Atlantic Airways to access Vágar Airport. 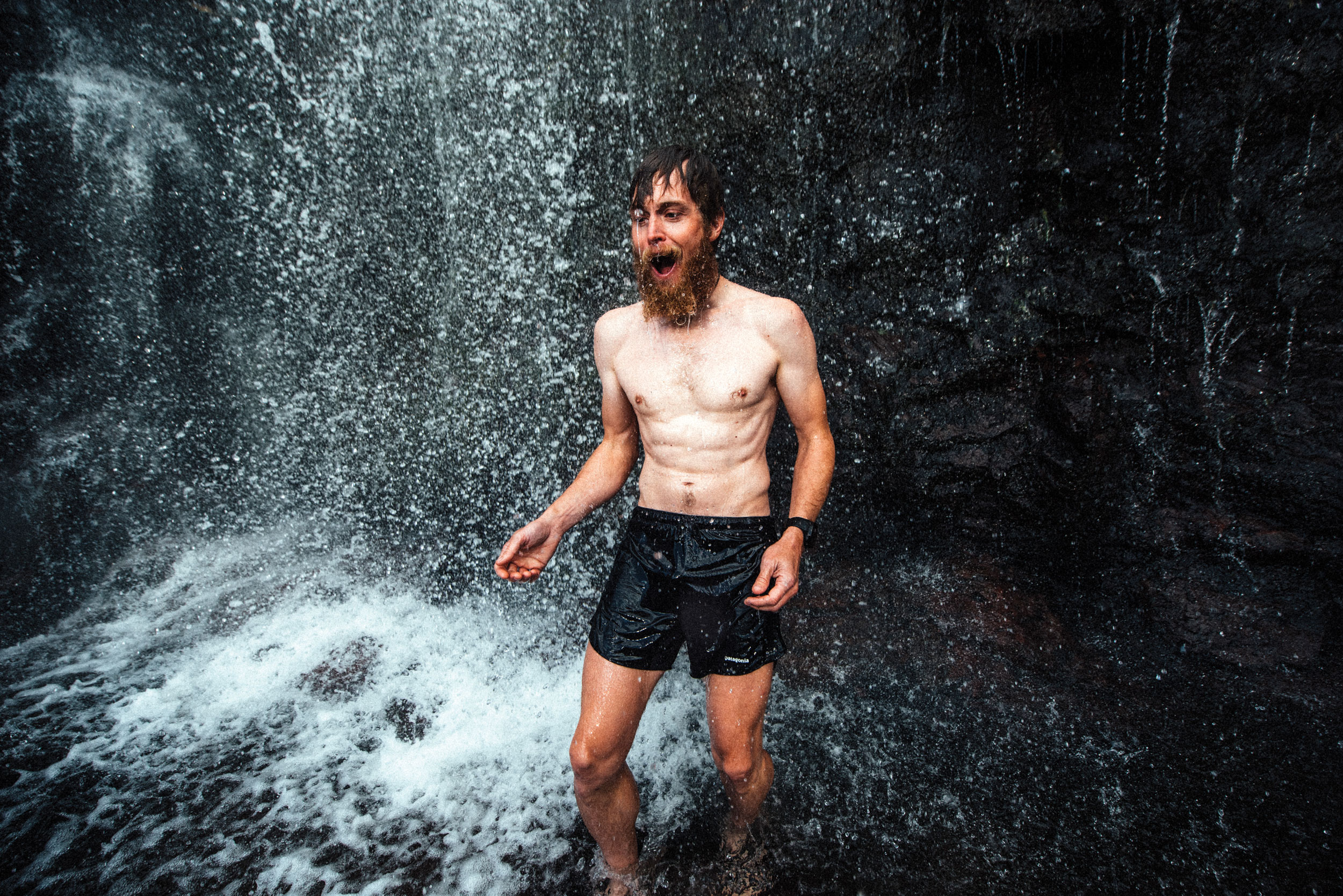 A roadside waterfall offered an invigorating shower prior to rushing to the airport.

Our short trip ended too soon, and after rinsing off in a small waterfall, we bolted to the airport to depart for our separate corners of the world. The trip was brief, but our travel by foot allowed us to connect to the Faroes more intimately than via any other form of travel. 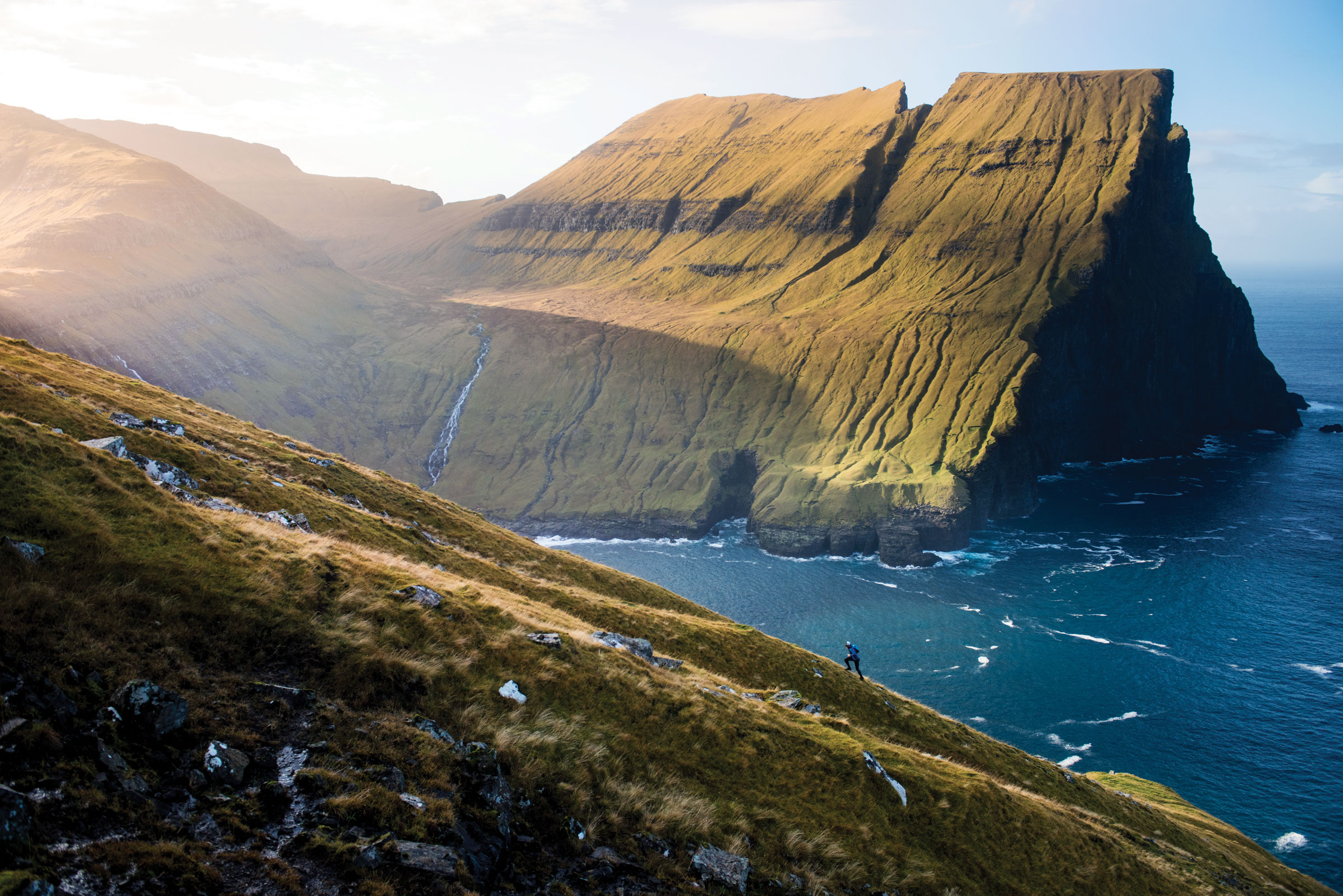 The islands are relatively small, with a very large landscape; Mylingur Peak in the background.

Stunning and so inspiring! Thanks for sharing

Greetings! I know this is somewhat off topic but I was wondering which blog
platform are you using for this website? I’m getting fed up of WordPress because I’ve had
issues with hackers and I’m looking at options for another
platform. I would be awesome if you could point me in the direction of a good platform.

Im a photographer, but running a race in the Faroe this fall, so ESPECIALLY excited to read this article! AWESOME!
I also would be excited to know the platform. I’m so ready for something new. Blogspot, yuck. WordPress. hope. Help?

Which race are you running this fall in Faroe?