HOKA PROJECT CARBON X RESULTS
In the end, the 100K record remained intact, although Patrick Reagan of the U.S. and Walmsley cranked personal bests for the distance. Below is how the 100K shook out.

Sponsored by HOKA ONE ONE

Five minutes 48 seconds—OK, raise your hand if you can run one, or maybe even six, miles at that per-mile pace. That’s pretty quick for most folks.

Now imagine maintaining it for 50 miles. On May 4, 2019, Jim Walmsley, 29, of Flagstaff, Arizona, did just that, with his time of 4:50:08 breaking stout, longstanding world and U.S. records for the distance. Bruce Fordyce set the previous world record of 4:50:51 in 1984, while Barney Klecker ticked off American record of 4:51:25—the oldest American road record on the USATF books—clear back in 1980, pre-dating almost all current trail ultras.

The HOKA ONE ONE Project Carbon X invitational event was open to eight HOKA athletes and originally conceived as an opportunity to break the 100K road record of 6:09:14, set by the Japanese runner Nao Kazami last June in Hokkaido, Japan. However, as Walmsley delved into the history of the 100K and 50-mile records, he became intrigued with the enduring 50-mile marks, and HOKA agreed to include a 50-mile-split option for the event, which took place along the American River in Sacramento, California. The course entailed an opening 19.7 miles slightly downhill, followed by nine 4.71-mile bike-path loops.

Walmsley says the original plan was: “Let’s try to go for the 50-mile record en route to the 100K. A 50-mile world record puts you on pace for an under-six-hour 100K. But for me on the day, it was two different races. I didn’t have it after the 50-mile mark to keep it rolling.”

But in order to adhere to USATF rules where a race offers a shorter split distance, Walmsley was required to finish the 100K to be credited with the 50-mile world record.

Coming from a track background at the Air Force Academy, Walmsley burst onto the trail-ultra scene in 2014, racking up a slew of wins since then, including the JFK 50-Miler, Lake Sonoma 50-miler and New Zealand’s Tarawera Ultras, and culminating in a course-record win at last year’s Westerns States 100-Mile Endurance Run. (Please see also our recent feature “Waiting for Walmsley” about his history and 2018 Western States victory.) On June 29, Walmsley, a full-time pro runner now, will be back at the Western States starting line in Squaw Valley, California, to defend his title.

Here, taking a break from his intensive Western States training, Walmsley shares his thoughts on Project Carbon X, his future goals and how he’d like to see runners open their minds about the sport. 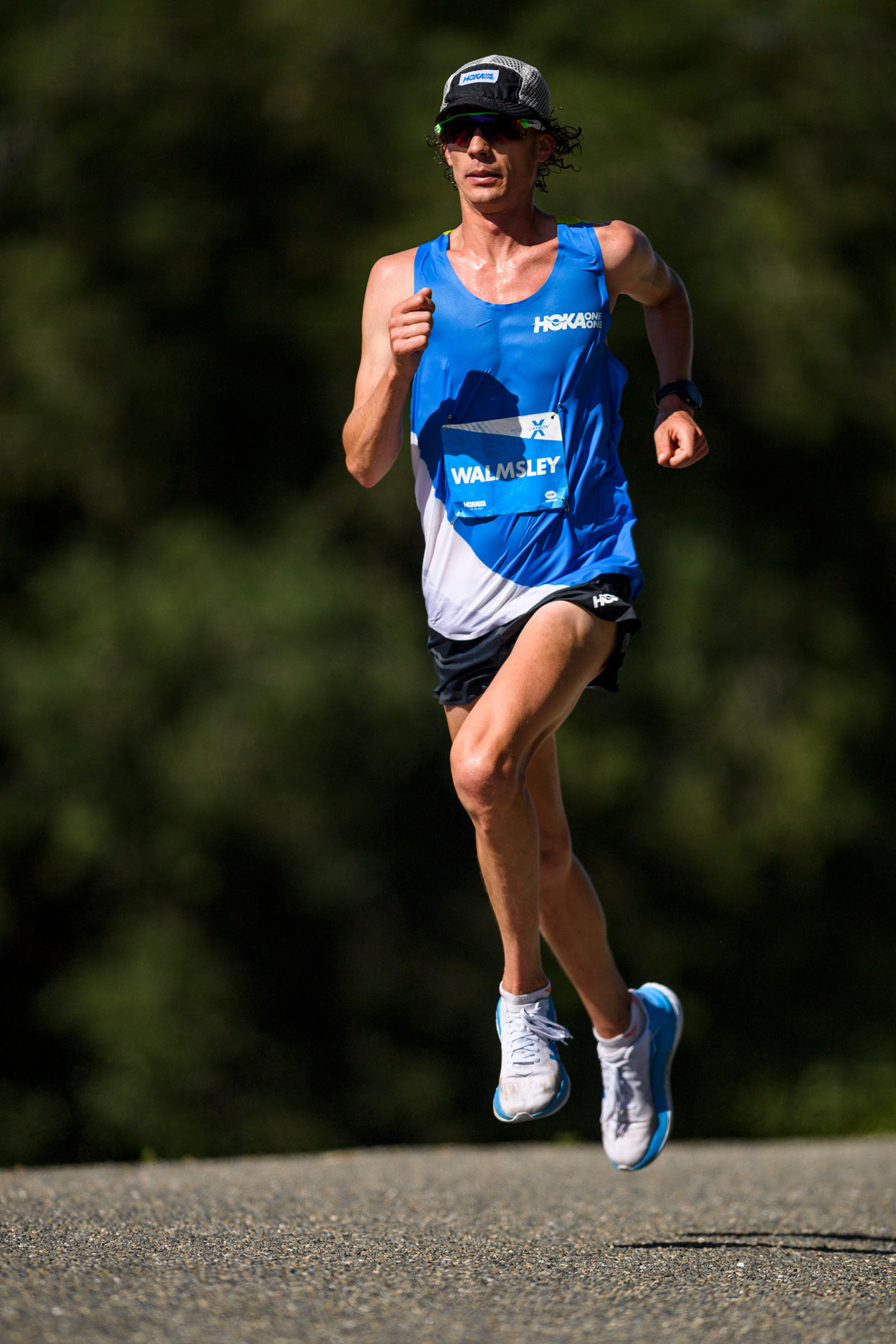 Q&A
What was the genesis of Project X?
Last fall I got invited to a HOKA Brand Conference, which is to get sales reps and employees around new products and things they’re working on. Ideas got thrown around about a 100K road ultra, which would be a kickback to HOKAs grassroots.

So I held off on applying to Comrades [Marathon, a famous 89K race, the oldest and largest ultra, in South Africa] because the timing might conflict. Every couple of months I’d check in to see if was happening. There were lots of people involved to get the permitting, plan the course, and pull off all the logistics.

Then there was the whole production team that were able to get the [Project X] shoe done in time. My job was rather easy. It was just to show up fit and be ready to go after a fast time and old records.

How long did you get to run in Carbon Xs before the race?
In January I ran in the first prototype before I ran a half-marathon. Then it was back to training on the trails, and doing my long runs in the Carbon X. The first ones had a stiff ride and feel, and I was wanting something a bit softer to go 100K in.

It’s now a snappy, cushioned, up-tempo shoe. I think it fills in niche in the HOKA lineup that’s needed and wanted.

What was your training like?
I was doing both trail and road. I would get on the track or road once a week for a faster workout. What was kind of nice was that it wasn’t too much faster. I didn’t have to flirt with workouts under 5-minute pace a whole lot. It was more about dialing in the efficiency of running a bit quicker.

Once a week on Sunday, I would do the traditional runner’s long run on a flat asphalt road. So I was getting on a harder surface twice a week, but with the foresight of a quick turnaround to Western States. I included more vertical training than probably most of the other runners, so I was getting into the [Grand] Canyon once a week and doing some climbing, generally a little over 15,000 feet a week.

As far as my mileage, I had a five-week stretch where four out of the five weeks, I was over 125 miles. It worked out usually about 18 hours of training. If I were to redo it, I would train more on asphalt because the asphalt really transfers to your legs.

How did you feel afterward and how was your recovery?
My legs were pretty shredded from the asphalt, so I planned a week off where I ran three or four times, at most four or five miles, and kept it really slow and flat. I was trying to do active recovery, and was actually moving houses so that was almost strength training and allowed me to stay mobile.

The following week, I was feeling really good and popped into an 80-mile week with 20,000 feet of vert, which is pretty burly, with the foresight that I wanted to get into more vertical training for Western States. It’s always a game of thinking about how to translate one training block into a specific block for the next race. 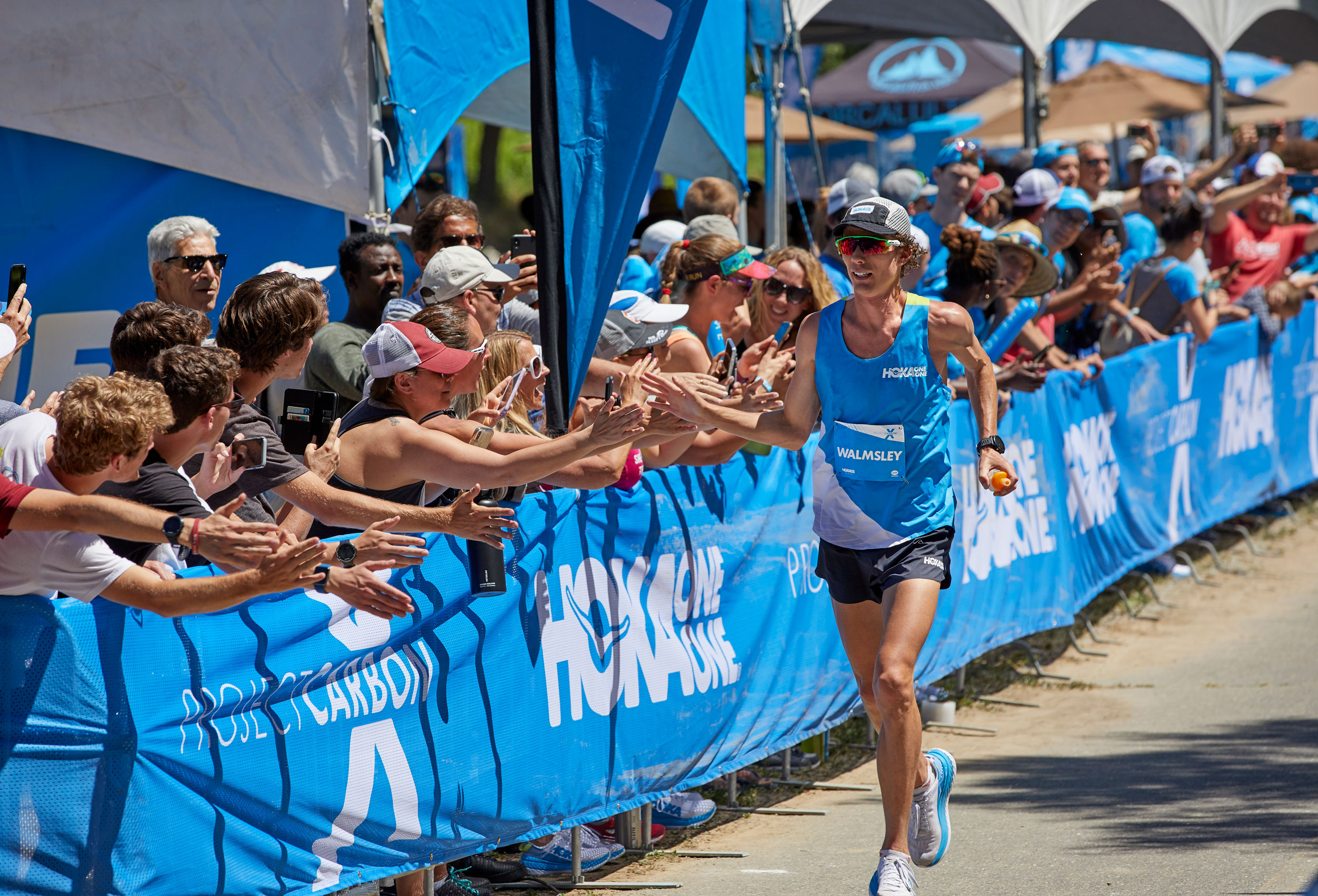 People should not be afraid to try different distances—some roads and some trails, being very diverse—and things out of their comfort zones and just being fans of running in general.

What are your goals for Western this year?
Definitely trying to repeat winning it. How or how fast is up in the air. A lot of it is going to depend on the snow conditions. There are still rumors that it could be a snow-route year, but you don’t really know until about the week before the race. Until you know that, you can’t game plan too much about the time, so it’s all about training hard and coming in as fit as you can.

Do you have any nutrition or particular eating protocol?
I’m vegetarian but I eat a lot of pizza. I have the same breakfast every day—a bowl of yogurt and Elizabeth granola because it’s predictable and stable. So it’s the parfait breakfast then pizza about once a day. I usually cook a meal at dinner but no routine there. The most common is a bowl with rice and beans and chard or something.

How has training with the Coconino Cowboys (a hardcore group of Flagstaff runners who train and sometime race together) affected your running?
Training with the Cowboys as a group is really helpful. It keeps all of us honest and getting out the door. We meet up at least once a week and if you didn’t run, you’re going to get heckled. And if you had a really good run, you get to say what’s up there.

We all have the same goal of showing up fit and ready for Western States. We’ve got four of five of us that are clicking some big runs in the Grand Canyon. It’s really cool to have people to carpool with. It’s an hour and a half and we get to BS and joke around on the drive. Sometimes we stick together in the canyon, but, usually on the climb out, everybody usually splinters a bit.

After Western, what is on your agenda? UTMB?
I’m trying to keep my hand out UTMB this year. I have two races lined up in August—Sierra Zinal, which will be a race out of my norm. It’s a screaming uphill and then a really fast descent. That’s part of the Golden Trail Series, and Kilian has dominated it the last decade. It will exciting to line up against some really fast, speedy trail runners.

The week after Sierre Zinal, I’ll be doing the UltraVasan 90K in Sweden. It has a more balanced amount of climbing and singletrack over 50-something miles, so that is more my style of race.

Then what?
I’ll be shifting things away from the flowy adventuring to something more strict, building a marathon block for February 2020, when I’ll be racing the U.S. Olympic Marathon Trials in Atlanta.

Doing stuff on the roads is window for me right now. I’ll follow the marathon with a Comrades race next summer, and I might try for the 100K world record again.

Longer term, it will be nice to turn the page on that part of ultras and get back into some meatier, grindier hundreds.

How has shoe technology changed the sport … or not?
It’s changing things a bit on the road. Hopefully, the Carbon X helped me run a bit faster. But seeing it translate into the trails, I see the carbon maybe not mattering but more about the foam that is more adaptive.

Where do you see the sport going? Any emerging trends?
Everybody is taking notice that ultra and trail running is booming. On the elite side, we’re seeing several organizations popping up that are trying to get some jurisdiction on how to regulate drug testing in the sport, a pressing issue that’s not fixed right now.

Do you feel PED use is on the rise?
I don’t think drug use is very prevalent or changing much, but the development of a governing body that can test more regularly and openly is important. There’s no organization that is doing it well now, so it’s a little frustrating.

What else would you like to see happen in the sport?
I’m trying to bring together a more full-bodied running community. Maybe I pick up some marathon community that end up following ultras; they might not run trails or ultras but could become intrigued and start following the sport more. And vice versa, getting some trail runners and ultrarunners to start following the elite and American marathoners.

People should not be afraid to try different distances—some roads and some trails, being very diverse—and things out of their comfort zones and just being fans of running in general.

We saw that a lot with Project Carbon X, a big discussion more top down from track all the way up to ultras. It’s been cool to see ultrarunning and trail running more in the discussion of general running. I think we’re all used to being the stepchild of the running community in a lot ways. We’re kind of left alone to do our thing, and we’re smiling because trails are hard and overlooked and underappreciated a lot of times.

Great article. Thanks for the interview & update on what Jim is planning.