I don't think I've ever heard from someone so pleased to have just DNF'd something.

"I just DNF'd on what I think is quickly going to become the next great trail-running test piece: the Pfiffner Traverse." 76 miles of amazing alpine running with long sections of perfect singletrack interspersed by tough climbs, steep descents, awesome navigation challenges in between the developed trail sections, unbelievable views and solitude, all with several 12,000 foot-high points, to boot!"

Stroeer is originally from Germany, is 33 years old and loves unknown and challenging adventures. Here's her account of her DNF'ing adventure over 4th of July weekend, 2018. She went on to avenge the FKT two weeks later.

All photos by Suzanne "Sunny" Stroeer

The pale gray dawn feels like blinding brightness to my tired eyes. I reach up to my forehead to switch off my headlamp, the headlamp that has been keeping me company through this past night and the night before.

I have been on trail for forty-three hours; today marks my second sunrise without sleep. I haven’t stopped moving since I left the trailhead the day before yesterday and yet I have been able to cover just 56 miles. I am on the Rocky Mountain’s most varied and beautiful endurance challenge, the obscure Pfiffner Traverse.

I am tired beyond belief, yet I have a big smile on my face as I breathe in the crisp morning mountain air and take in the sweeping views from my perch high up on the crest of Colorado’s Continental Divide.

If this is the first time you are hearing about the Pfiffner, don’t worry—you are in good company. Few people other than a handful of hardy thru hikers know of its existence; even fewer have attempted to complete the traverse in a single push, and for good reason: it entails hardcore off-trail terrain, most above 10,000 feet, and serious alpine route finding in a spectacularly remote setting with potentially dire consequences for the unprepared. Yet I am convinced that this crown jewel of the Colorado Rockies has the potential of being ultra running’s next great test piece, nestled in difficulty squarely between the Grand Canyon’s marquee Rim-to-Rim-to-Rim and the superhuman peak bagger's linkup that is Nolan’s 14. 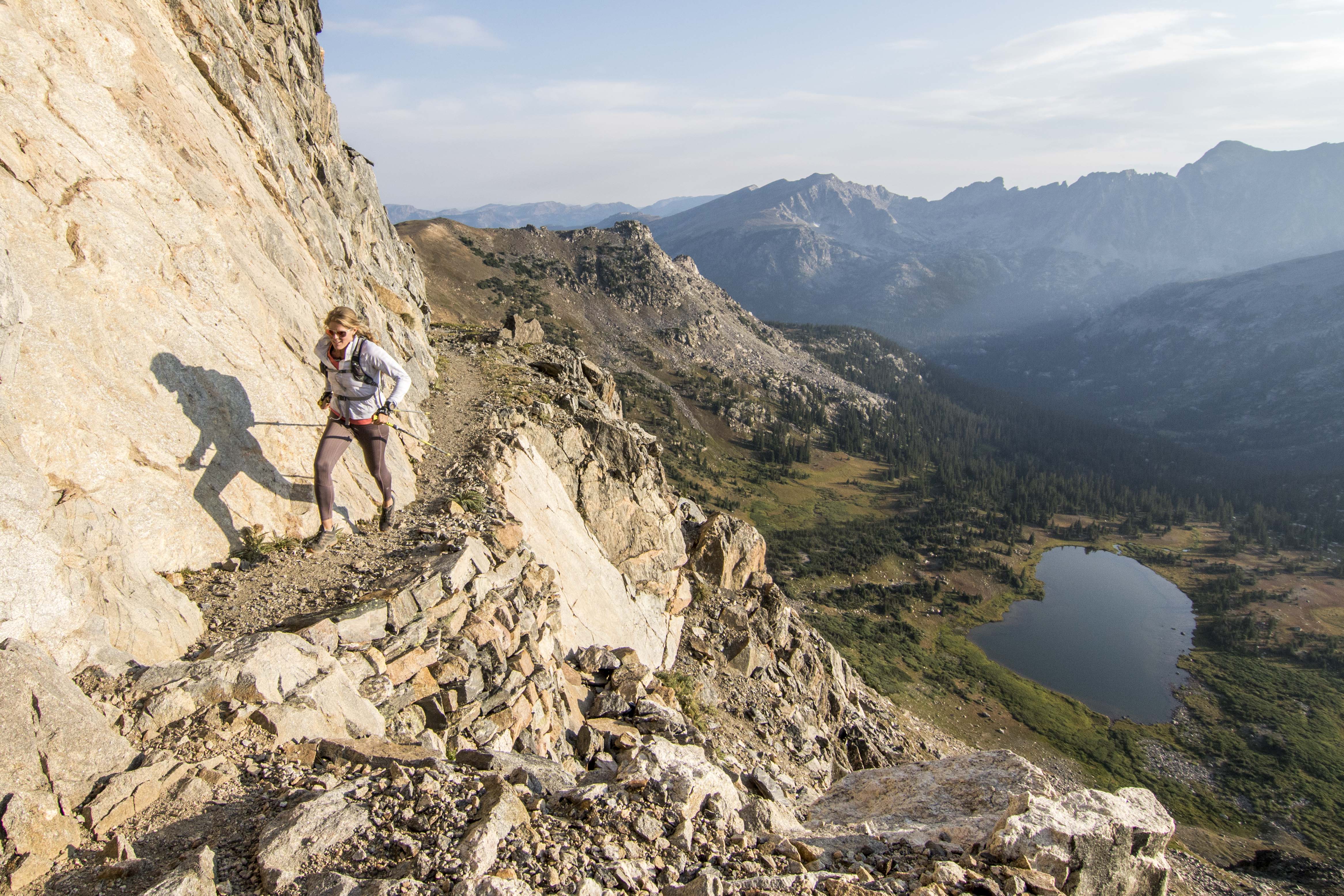 The Pfiffner Traverse is a mountain runner’s dream: miles of smooth, gentle singletrack that flow through high mountain meadows and across infrequently traveled passes along the Continental Divide’s alpine beauty. Stretches of exposed, soft alpine tundra switch off with fragrant forest and lush wetlands defined by sparkling streams and colorful explosions of wildflowers. During the height of summer, majestic elk graze peacefully above treeline here. I ran right past a massive herd just twenty miles ago. Crystal-clear alpine lakes, waterfalls, views for days and solitude: this run has it all.

It's easy to access yet remote in character; it is high up, and it is a serious endeavor, which is exactly what makes it so alluring. 76 miles with almost 57,000 feet of vertical change. The northern and southern termini of the route, Milner and Berthoud Passes, respectively, are easily accessed by car but sit at 10,600 and 11,300 feet, respectively. The traverse meanders along the Continental Divide, crossing thirteen major passes and dipping below 10,000 feet only twice. The real kicker is this: complementing the Pfiffner’s many too-good-to-be-true miles, over 40 percent of the traverse is off-trail; plus there isn’t a single paved road access point, and only one drivable dirt road, on the entire 76 mile stretch.

A lot of the Pfiffner’s off-trail terrain is straight forward: contour along a lake shore above treeline, identify the obvious pass in front of you, pick your way up a tundra slope to gain the highpoint. Other sections are devious, heavily vegetated and without obvious way points. Rare is the moment where the Pfiffner allows you to switch off your brain and proceed on autopilot. Sounds hard and amazing? That’s what I thought, too.

I first read about the Pfiffner Traverse while skimming through Gerry Roach’s classic Indian Peaks climbing guidebook. The description sounded promising but vague: “There are many variations to this complicated project and any attempt requires your creativity” the book states. “Any traverse on or near the divide is a significant undertaking that is not done very often.” Roach’s suggested time for the full traverse is one to two weeks. 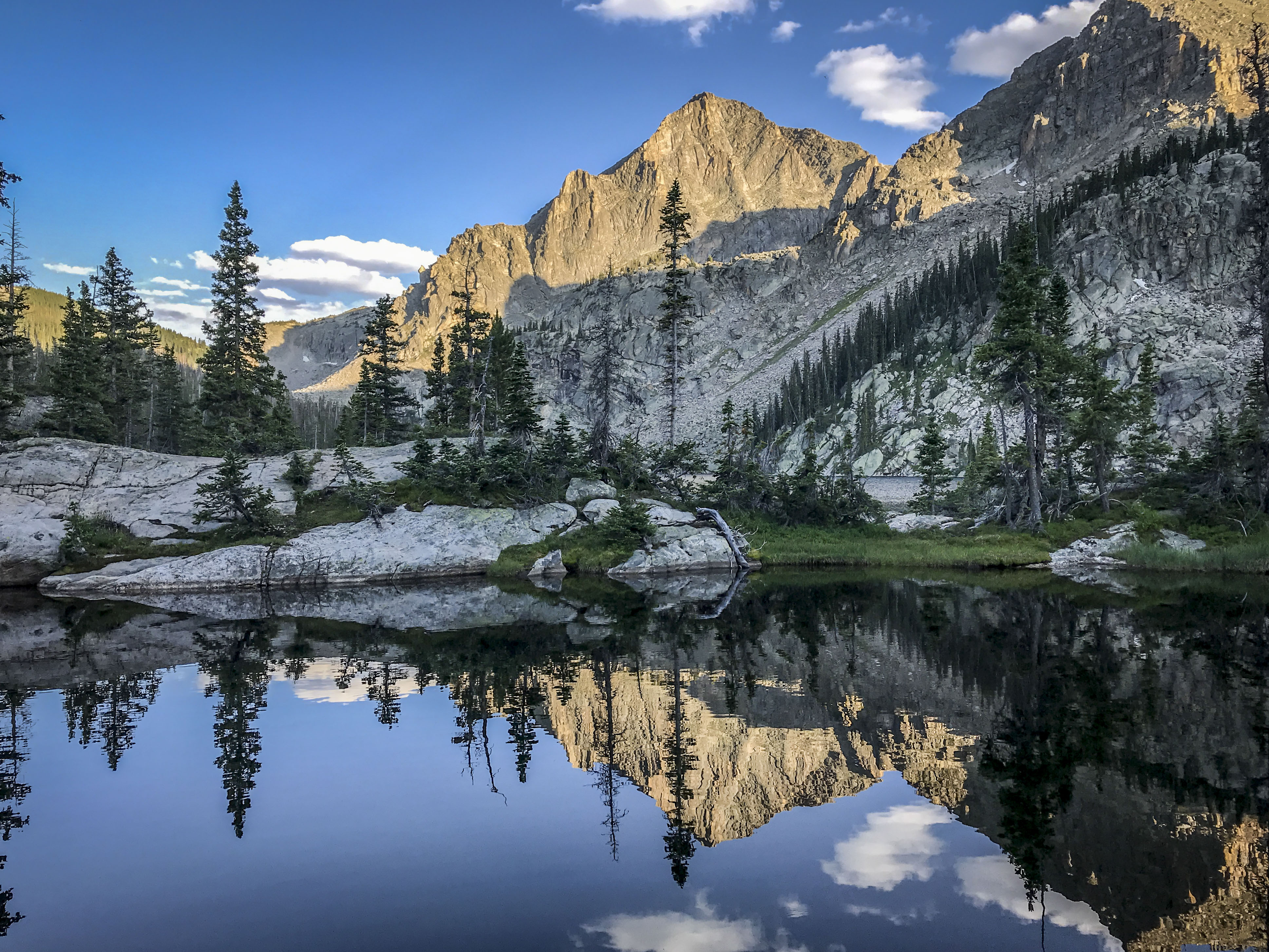 Andrew Skurka, prolific endurance adventurer and champion of the 2016 Indian Creek 50 Miler and 2016 Silverheels 100 Miler, published a detailed guide book to the Pfiffner Traverse. At the time, I was knee deep in training for the 2018 Ouray 100, and looking for interesting routes that would let me log big miles at altitude.

The Pfiffner fit the bill. I bought Skurka’s hot-off-the-press digital guidebook bundle and got to planning. It all sounded like a great idea.

But that was three weeks ago. Right now, nothing is sounding like a great idea anymore. I am forty-three hours into my second attempt on this beast of a mountain run (my first attempt earlier this month ended prematurely due to thunderstorms). I am tired, I am sore, and I am cold: it is late July, yet the air up here already tastes like winter.

I still have twenty miles to go and my joints are creaking with exhaustion from over 40,000 feet of climbing; and yet, despite it all, I can’t help a big smile. The long night —my second on course—is over and the sun is finally rising, bathing the peaks of the Continental Divide in an otherworldly glow. I have run many a beautiful course in my life as an ultra athlete, yet the Pfiffner is in a class of its own.

It is so stunning, so remote and so beyond compare that it almost doesn’t matter how much suffering the route involves: I simply feel an overwhelming amount of gratitude to be able to travel through these mountains, maybe not speedily but at least safely. 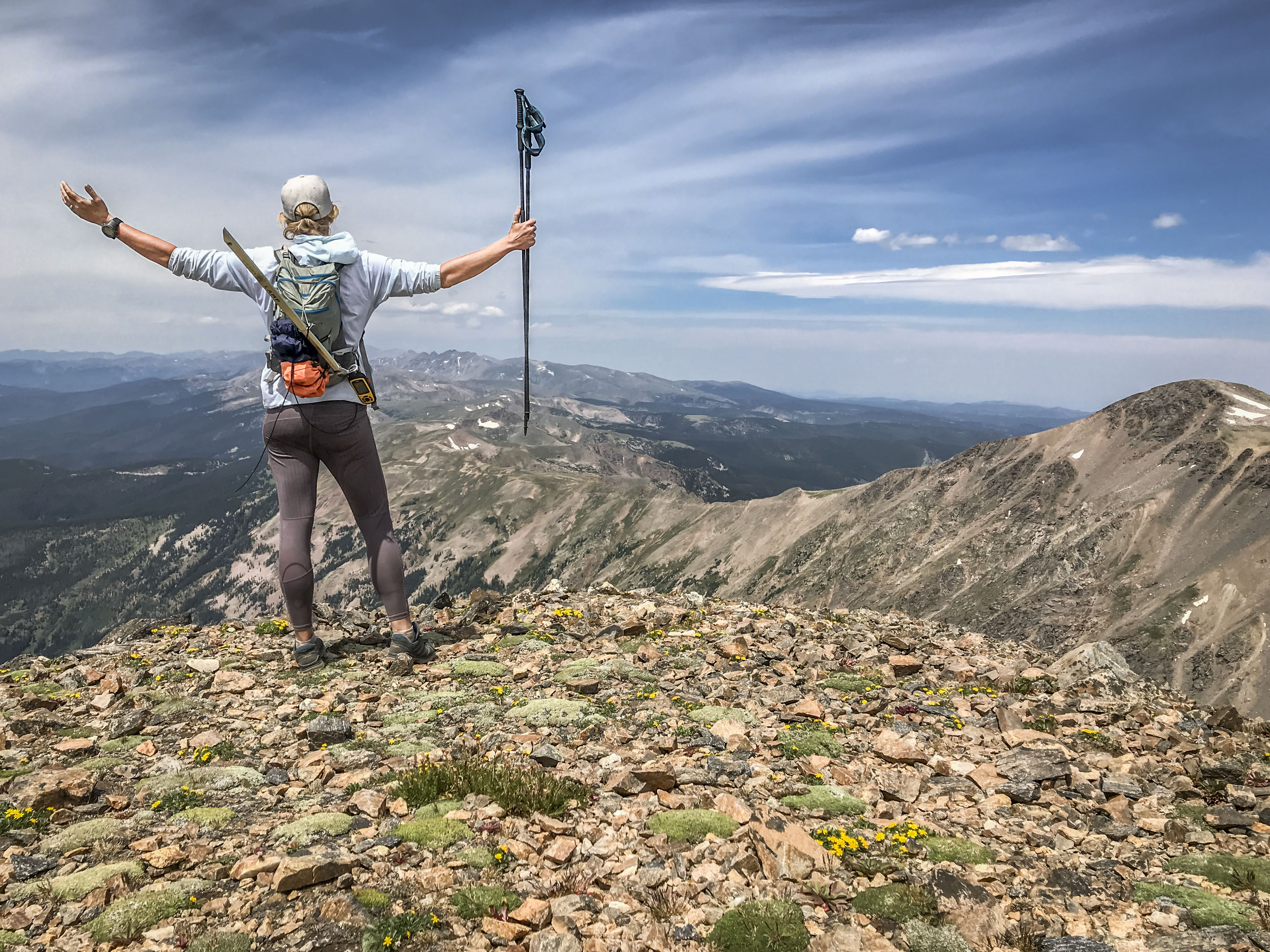 When I first attempted the Pfiffner I never expected to fall in love. I expected a beautiful, high route that would challenge me to the core, and that is exactly what it turned out to be, but it was so much more.

Even as I was aborting my initial attempt on the route earlier this month, limping along on sore joints above treeline and scared by thunderstorms in close proximity, I wasn’t demoralized by the difficulty of the route or my failure to complete the mission. Instead, I was filled with wonder and amazement that such an incredible stretch of beautiful and utterly wild backcountry could exist so close to the hustle and bustle of the Denver metro area, and I was brimming with desire to return. 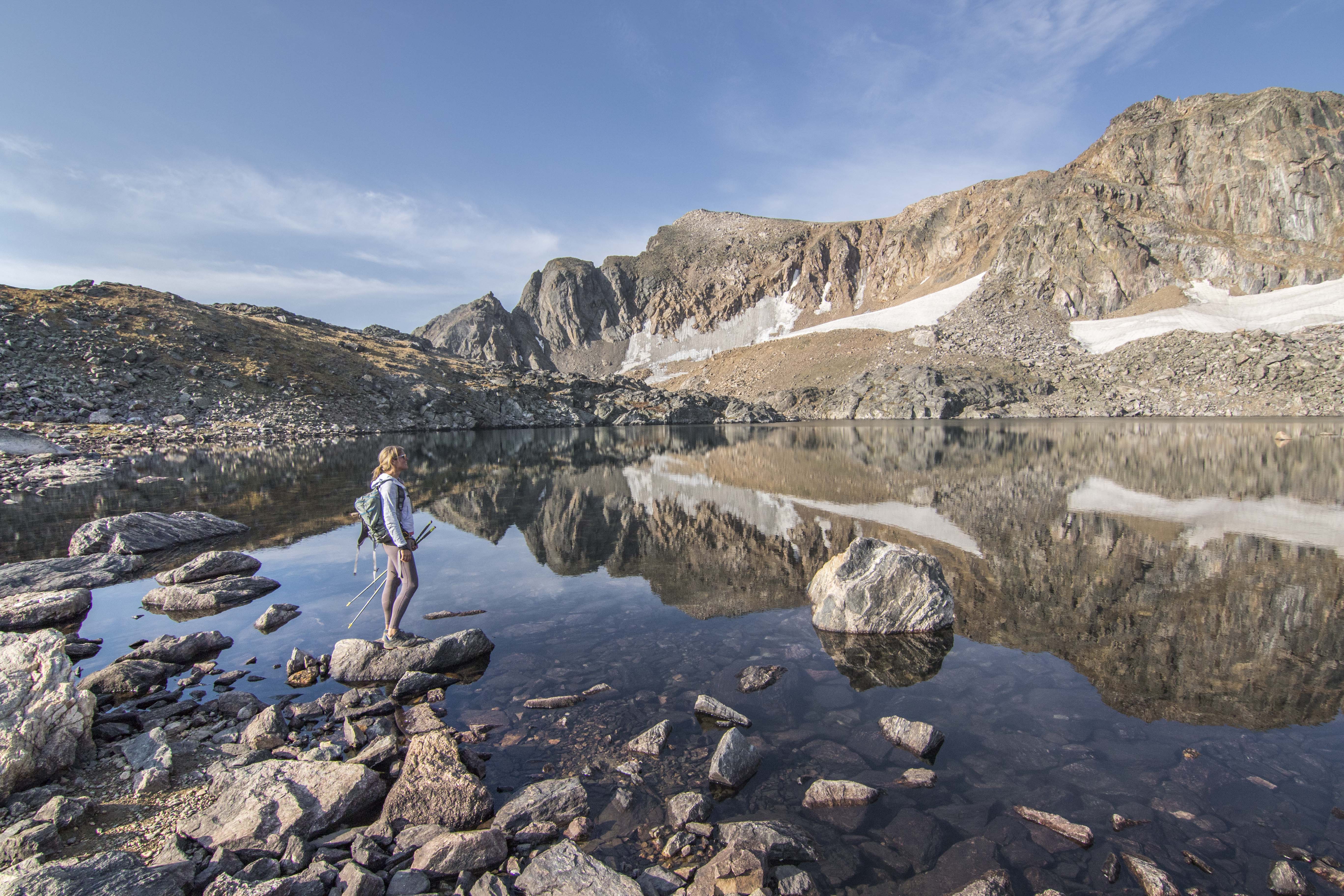 That’s what brought me here, today, to my second sunrise on my second attempt on the route. I shouldn’t be here; my A race for the summer, the mega-tough Ouray 100 Mile Endurance race, is only a week away. I should be tapering. But I also know this: mountain running, for me, is not about how fast I can go or about winning races. Mountain running is about discovering new places, finding out what I am capable of, and finding happiness in the most unlikely situations.

Sunny Stroeer is a professional mountain athlete and outdoor photographer. In July 2018, she became the first person to complete the Pfiffner Traverse unsupported in a single push (and she clutched a win at the Ouray 100 Mile Endurance Race a week later). When Sunny isn’t running in the mountains, she enjoys climbing big walls and going on grand adventures with her husband. You can follow her adventures on Instagram at @sstroeer or at www.sunnystroeer.com. 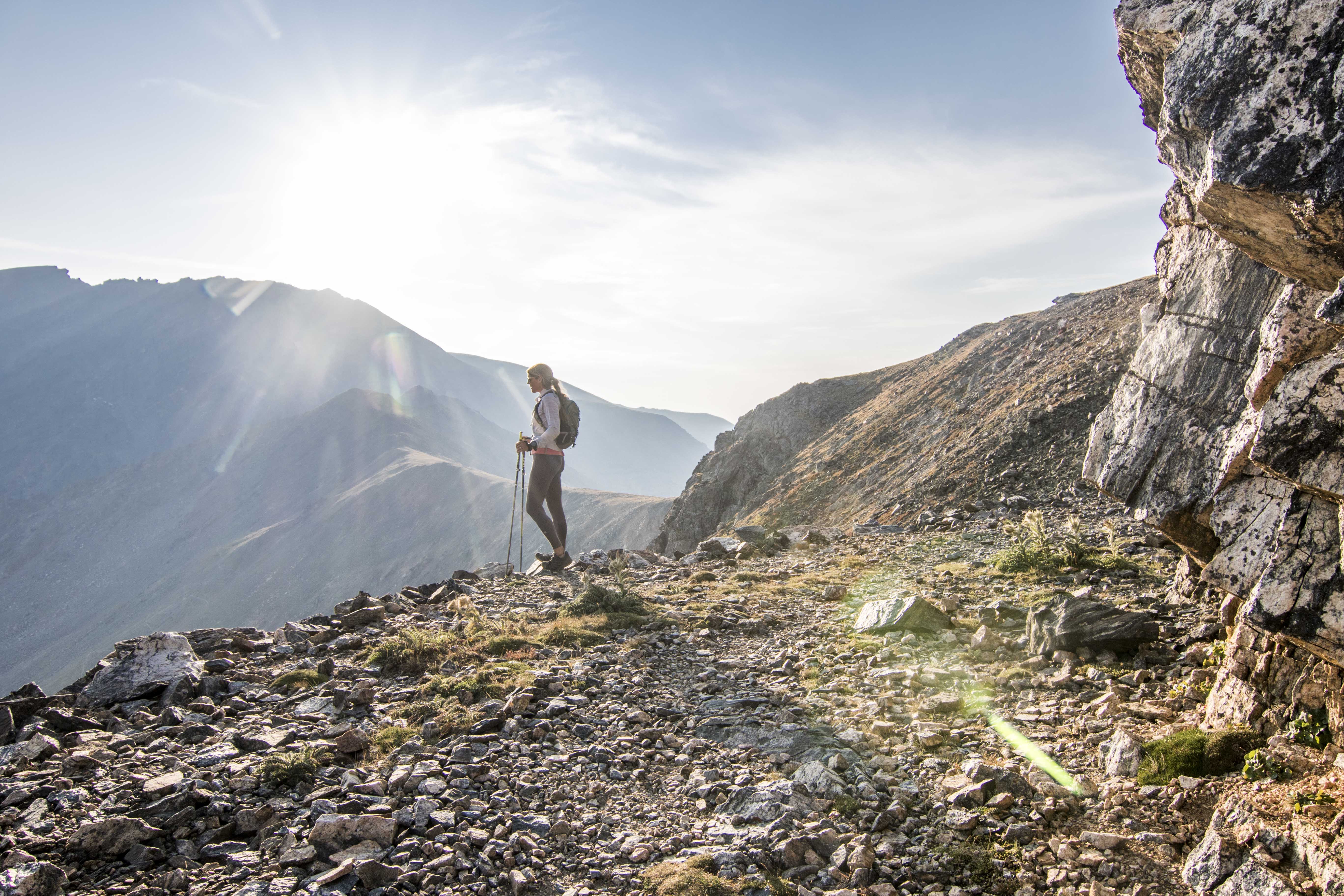 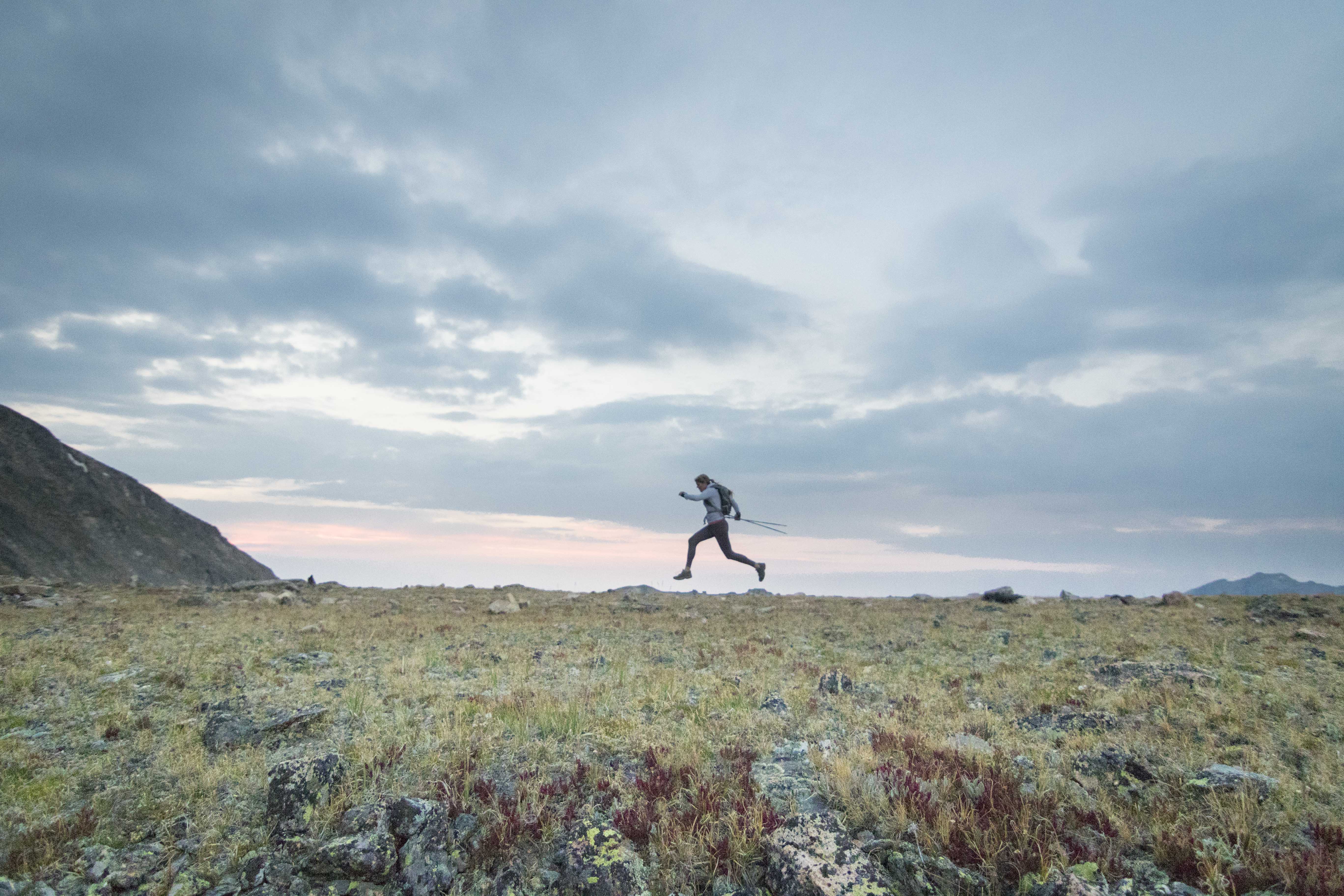 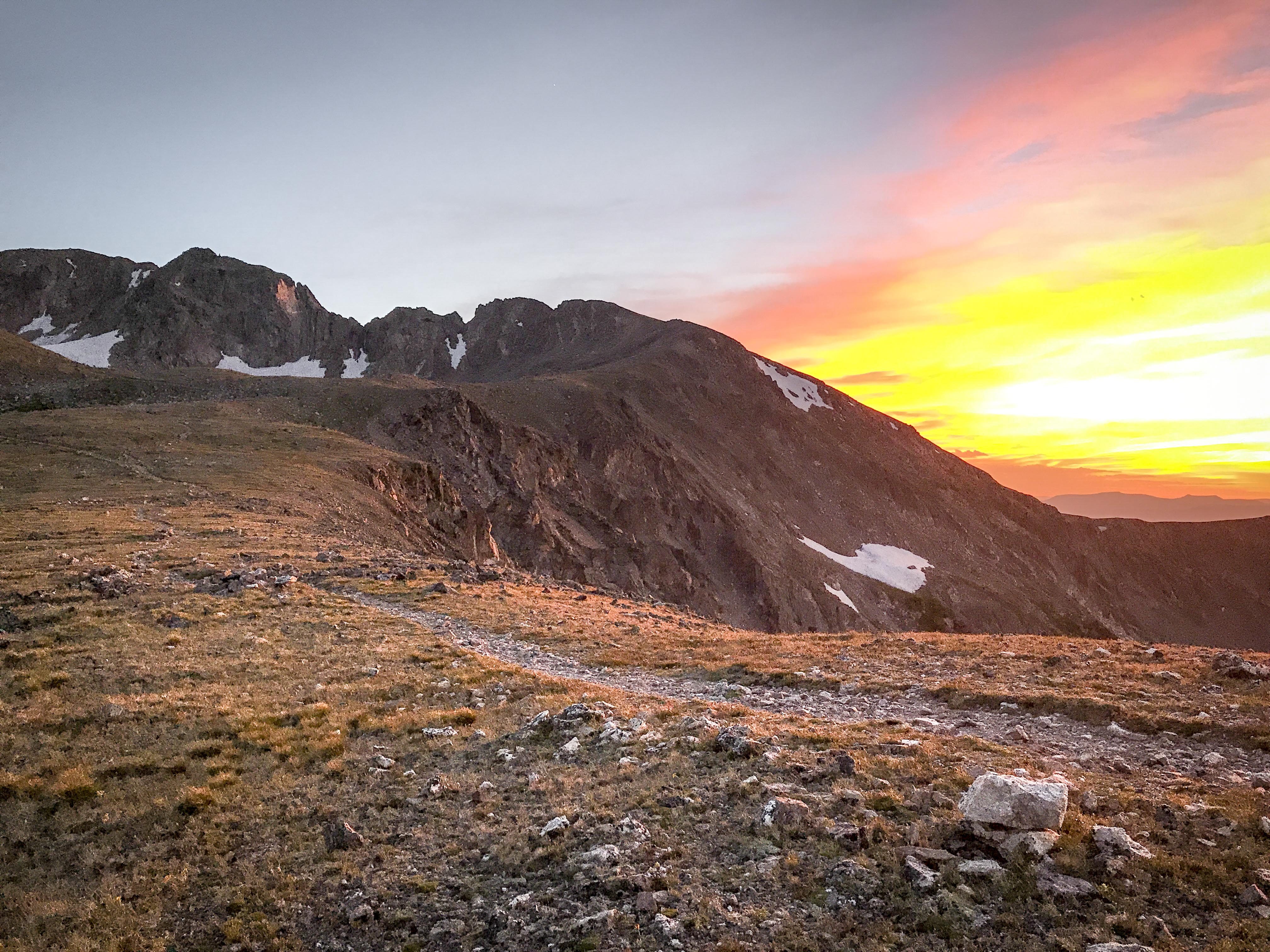 Wow! Reading about this makes me want to go out and do it. Don’t you think it’s kind of cruel to publish this account in October? We must all wait until next summer before we can go out and try this! Oh, well, I guess it gives us all winter to plan.

Was Andrew’ s guide book detailed enough to lead you through or did you have to use orienteering skills? Could a fairly skilled back packer/trail runner follow the book?

Hi Jeff, the guidebook paired with a GPS app was enough to get me through the route. The most difficult navigation – and most serious terrain – is right in the middle (up and over Paiute Pass then onto the Northeast Gully), and my first DNF was partially due to my hitting that section in the dark… not a good idea. If you’re concerned about route finding I’d say go fast pack the Paiute section before taking on the whole route. The rest is not bad. Good luck!