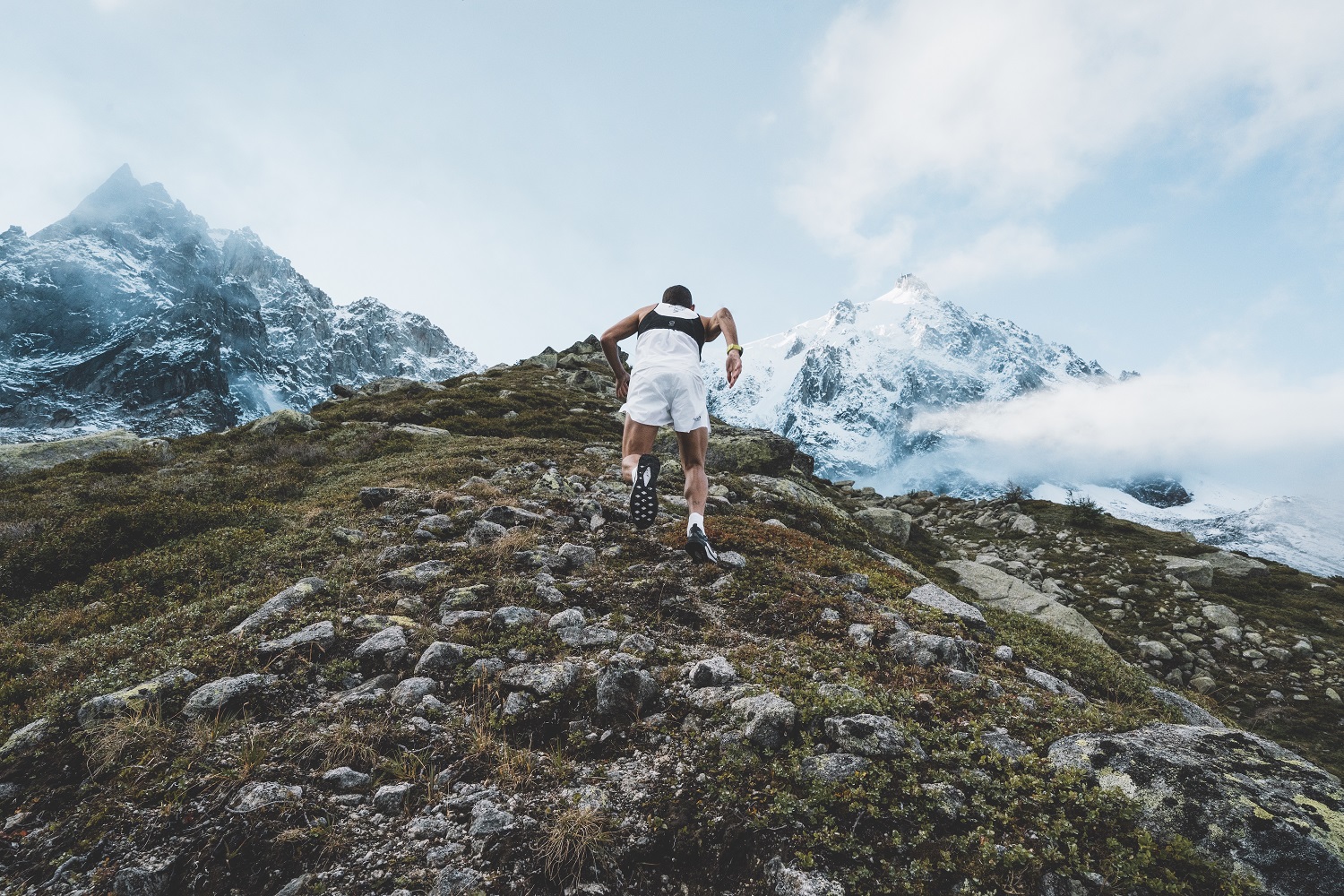 The Science of Trail Running

The North Face VECTIV™ technology turns your downward force into forward momentum and allows you to run with confidence.

In Partnership with The North Face
By Brian Metzler

The dynamic beauty of trail running is that no two footsteps are ever the same. The surface of the trail is constantly changing, so how we touch the ground and push off to start a new stride is always unique. It’s why trail running can feel so natural and easy and yet so challenging, too.

While trail running recalls the lightheartedness of our youth—effortlessly running over the ground, playing in the forest and exercising with joyful abandon—it also involves an intense physiology and distinctive skill.

“Trail running is one of the purest and most unique forms of physical exercise because it’s so multi-dimensional,” says The North Face athlete Hillary Allen “Road running is a more two-dimensional movement, whereas trail running is three dimensional. Every single stride is a singular and delicate balance of movements, and the goal is to maximize your efforts without wasting energy.”

While there are similarities to running on a road and on a single-track trail through the woods, the effort and exertion needs to be much greater on the trails to match the steep climbs, sharp turns, unstable surfaces and constantly changing weather.

“It’s a lot about skill and strategy and strength and how you move over the particular features of a trail,” Allen says. “It’s an intense physical dance that requires a good degree of cardiovascular and neuromuscular synchronization. Being able to optimally apply those elements is what leads to the most efficient muscular and cardiovascular effort and output over the duration of a run.” 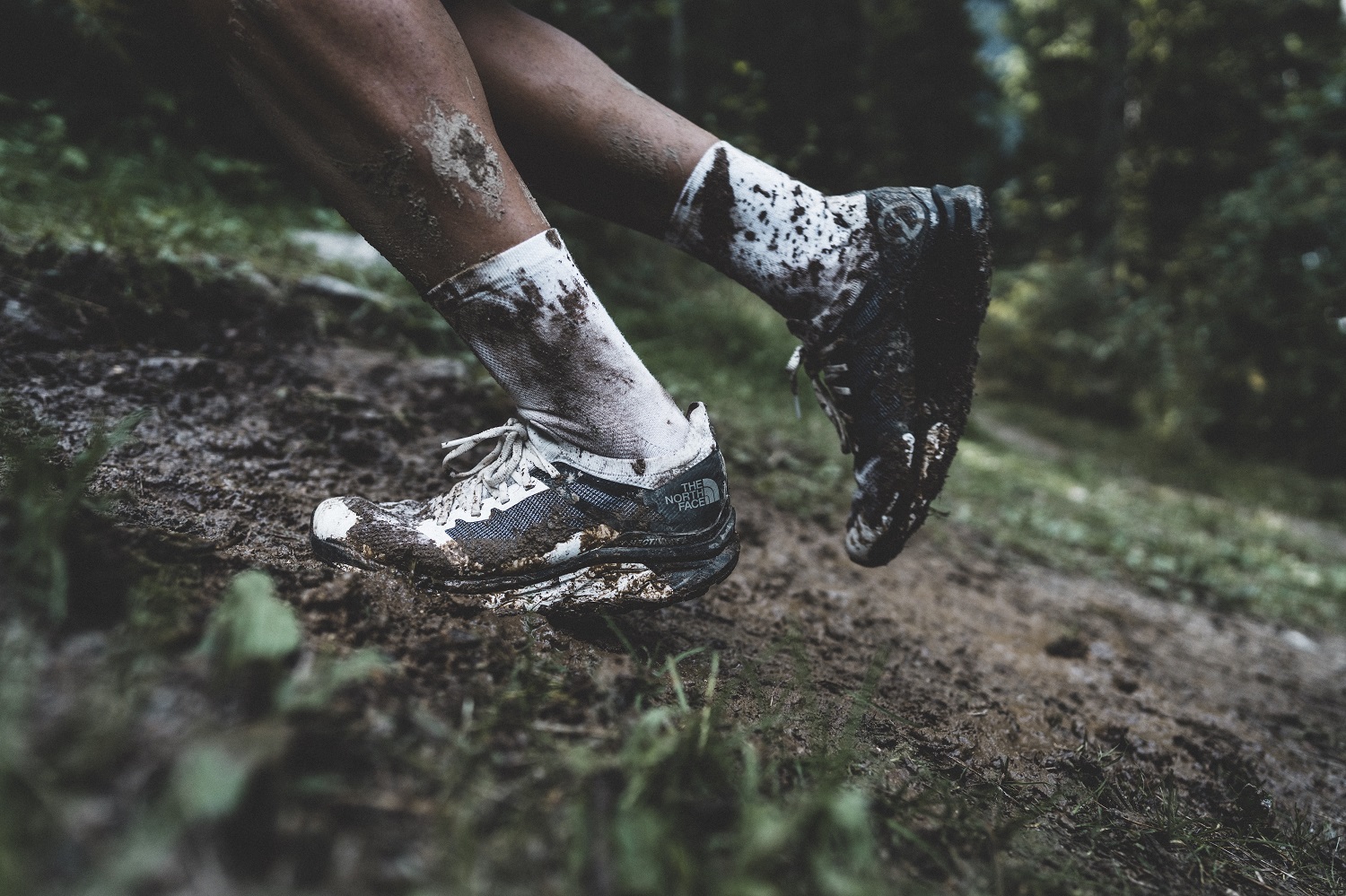 WHERE THE RUBBER MEETS THE TRAIL

The shoes you wear represent the single biggest variable in your ability to improve that balance. Heavy, clunkier shoes will make the physical effort harder, whereas lighter, more agile shoes can help you run more efficiently.

In recent years, trail running shoes have evolved with the authentic feedback from elite athletes, wear testers and shoe designers. Some of those innovations have included softer, squishier, maximally cushioned midsoles, “rocker” or convex underfoot geometries and stickier outsole rubber. They’ve all played a part in the evolution of trail shoes, but none of the previous research has offered an all-encompassing, systematic approach to improve performance through shoe technology.

Meanwhile, road running has witnessed the emergence of “super shoes” in recent years—shoes with carbon-fiber propulsion plates embedded in the resilient midsole foam—and the results have been astounding. Essentially, the systematic interaction between the runner’s downward energy combined with the rigid plate and the responsive foam have become a new shoe design paradigm that has resulted in huge advancements in running economy and performance. The end result has been major marathon victories, new world records and considerably faster times across the board, from top-tier pros to sub-elite runners to hard-working age-groupers. 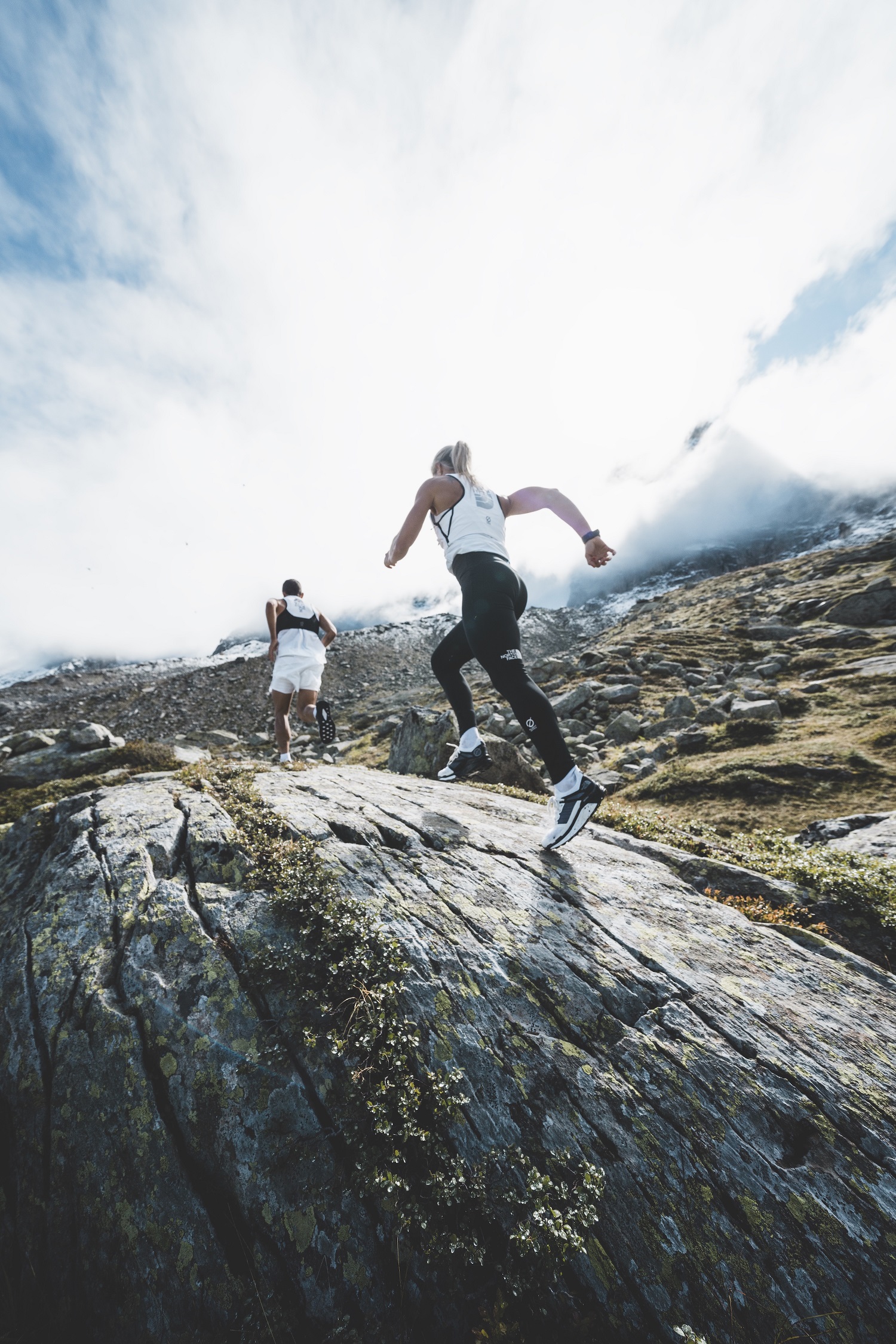 Is it possible to develop a trail-running shoe that starts from a similar scientific design premise?

That’s what The North Face set out to do when it began working on its new VECTIV™ technology footwear design. The company studied how to maximize returning the energy a runner puts into every stride while also providing the appropriate amount of trail-specific stability, protection and traction. Imagine lacing up a pair of trail-running shoes that actually gave you a jolt of energy in every stride over variable terrain, in other words, actually helping do some of the work for you.

After more than two years of development, The North Face unveiled the Flight VECTIV™ as the marquee model of a new line of super-charged trail-running and hiking shoes built to promote forward propulsion. Indeed, testers have found the VECTIV™ system puts a serious spring in every step. A patented 3D carbon-fiber-plate design and progressive midsole rocker geometry add to the momentum of every stride.

In addition to the Flight VECTIV™, there are two other VECTIV™ trail-running models that are rolling out in 2021—the more protective Infinite VECTIV ($169), the max-cushioned Enduris VECTIV™ ($139)—that utilize PEBAX or TPU plates. There will also be a sporty and versatile women’s-only version for trail running and light hiking: the Hypnum VECTIV ($139).

All of the VECTIV™ trail running shoes have been designed to optimize the fit, feel and ride specifically for women. The 3D propulsion plate technology, midsole foam chassis and interior volume have been optimized for women’s feet and movement patterns based on wear-testing results and input from The North Face athlete team members, including Hillary Allen, Kaytlyn Gerbin and Fernanda Maciel. The size, shape, and positioning of the plate technology have been specifically tuned for women’s gait patterns and preferences, says Michael Thompson, the brand’s Senior Global Product Director of Footwear.

“A big piece of the puzzle for us is to bring true trail innovation and performance for women,” Thompson says. “We took a holistic product approach with VECTIV™to make sure we weren’t compromising the product experience for her in any way. We specifically wanted to make sure the anatomical patterning of the shoe and making sure that there was no ‘shrink it and pink it’ mentality that footwear design has fallen victim to in the past. We really looked at the anatomy of women’s feet and built the pattern around that. Some of the specific adjustments we made to optimize the fit, feel and performance of the women’s models include a slightly narrower heel with a secure, locked-down feeling, a lower collar height around the ankle, optimal tongue padding thickness and a softer feeling from the plate technology.”

THE PROOF IS IN THE RUNNING

The North Face footwear team didn’t set out only to build a new shoe, but a science-driven paradigm of footwear development, Thompson says. They used extensive innovative insights from The North Face design center in Annecy, France, extensive wear-testing from its athlete team.

“From the start, we’ve wanted to understand how we can quantify the subjective feedback we get from athletes and wear testers,” Thompson says. “We’re lucky where we have an incredible roster of athletes that want to engage in the product creation process but also knows how to articulate what they’re feeling and what they like and what they don’t like so we can make meaningful changes to improve the product. “We wanted to make sure we were not just drinking our own Kool-Aid and that we had objective measurements that validated what we were doing.”

Throughout the development process, the footwear team put its trail-running athletes to the test in the lab, recording a variety of metabolic data while running in numerous prototype models.

The North Face has also verified through a third-party study that the technology and design of the Flight VECTIV™ can reduce descending impact forces by 10 percent (based on VO2max and accelerometer readouts) and convert downward energy into forward momentum, thus reducing leg muscle fatigue during ultra-distance running events. 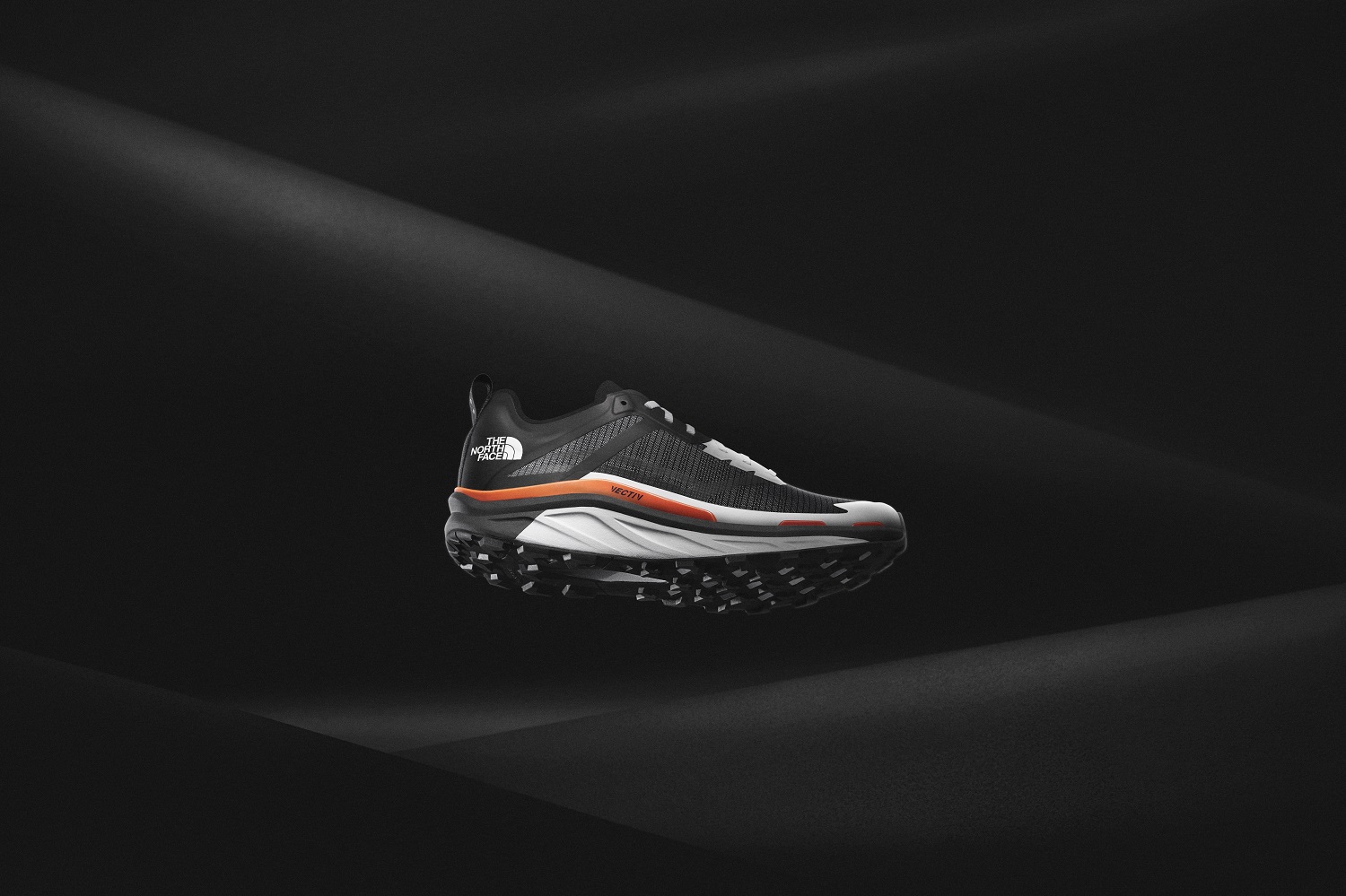 The Flight VECTIV™ has a cushioned but firm demeanor, in which you feel the softness at the initial impact with the ground. From there, the foot rolls smoothly through the gait cycle with the aid of the 3D carbon-fiber plate and the rocker shape to toe-off phase. Instead of a runner having to generate excessive energy output from their feet, ankles and lower legs for stabilization and propulsion on uneven terrain, the shoe actually eases the effort.

The outsole has a matrix of low-profile, directional 3.5mm lugs that provide excellent traction on a wide variety of surfaces, including roads, snow, dirt and even sloppy mud.

With its new line of VECTIV™ footwear, The North Face has revolutionized how trail running shoes are built, opening new pathways to performance for runners of all ability levels.