An anywhere, anytime warm-up routine to get ready to trail run. 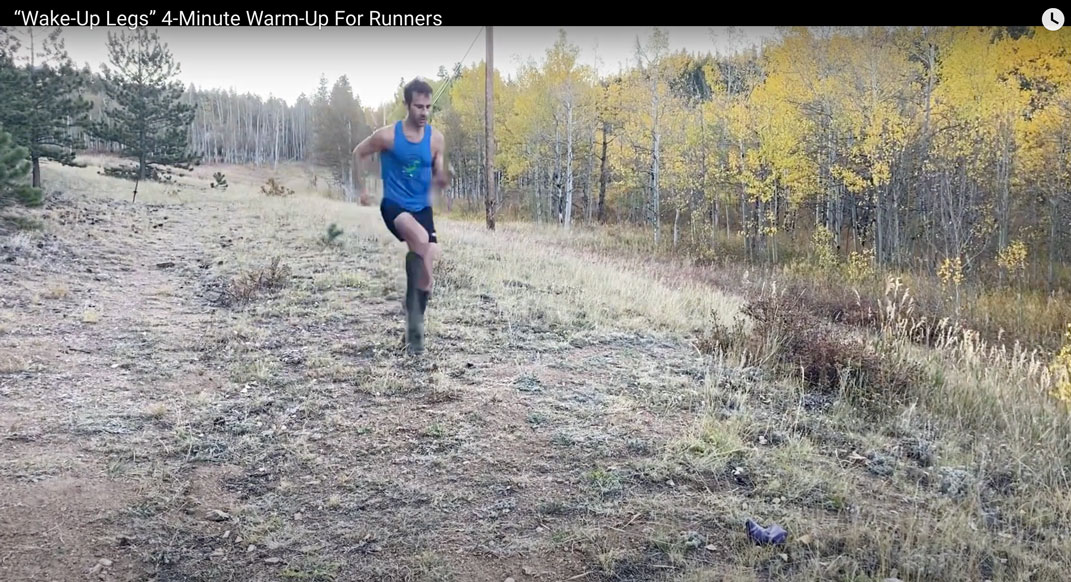 You pull up to the trailhead. You get out of the car. And running feels impossible.

For me, those first few steps feel like Neil Armstrong on the moon, only if the gravity was 20 times greater than on Earth and I had been holding a pee for the whole space trip. A few small, painful steps for man, one giant pee for mankind.

The problem is worse if I’m running right after waking up, or after a day at the computer. Here’s what I have learned in coaching: those feelings are normal. Smart training, recovery techniques, and plenty of food can reduce stiffness, but it’s likely going to be a part of your running journey, especially with age. The key is to know you can go from that sloth-like feeling to hyped and ready with a set routine. And that’s where a warm-up comes in.

Warm-ups are a part of every sport, from the kama-sutra positions you’ll see many football players practicing together before games to elaborate routines from track stars. Tons of research backs that up, with dynamic warm-up routines supporting health and performance for many athletes. You’ll often hear people say they have never seen a lion stretch. But I live with an 8-year old dog and she knows to get a solid stretch whenever she gets up from a good snoozle.

It can be jarring to start anything, and you can apply warm-up principles to non-running tasks too. After starting a podcast, my wife/co-coach Megan and I realized that just launching into the intro felt very awkward. To combat that, we record for a minute to get over that hump, then discard that warm-up recording and start over. It’s like pre-gaming a college party, but with jokes instead of Natty Light.

There is no set warm-up that you must do. Like most things in training philosophy, there are dozens of protocols that can work, from Coach Jay Johnson’s amazing lunge matrix/leg swings combo to Coach Jason Fitzgerald’s Standard Warm-Up to yogis who swear by a 10-minute sun salutation. Over the years, Megan and I have adopted elements from different protocols, testing them on athletes that struggle with warming up, to come to the 4-minute Wake-Up Legs routine in this article.

Over the years, Megan and I have adopted elements from different protocols, testing them on athletes that struggle with warming up, to come to the 4-minute Wake-Up Legs routine in this article.

It’s called the “Wake-Up Legs” routine as an homage to former professional cyclist Jens Voigt, who famously dealt with the difficulty of hard races by saying “Shut up, Legs!” The goal of the routine is to increase circulation and range of motion, while also providing light stimuli for mobility and strength that can add up over time as bonus strength work. Let’s do this!

Step One: Walk around

Don’t start the warm-up straight from the couch. Ideally, play “Walk It Out” by Unk at this step. As much as possible, try to get super enthusiastic, faking it if needed. Dance moves may help.

An exercise band is a must-have for all runners, supporting dynamic strength in multiple directions, along with hip stability. Start with 10 side-to-side steps in each direction, plus 10 to 20 forward steps, and 10 backward steps. When you get comfortable with the band, you can do these a bit more quickly for neuromuscular priming. If you don’t have a band yet, you can do the same movements without one while you are waiting for it to be delivered.

Here is an evolutionary relic of Jay Johnson’s time-tested routine. We universally recommend just 10 side lunges since some athletes have reported knee pain with forward or rearward lunges. On the side lunges, focus on range of motion. You can even put a little bounce in your transition if the music is bumping. Finish this step with light calf activation via a few light calf raises.

Butt kicks are surprisingly controversial in the running world, since the motion doesn’t necessarily approximate a power position in normal running form. However, they are a great way to get moving with knee flexion, but without the loading of lunges. Don’t actually kick your butt, just do a few sets of 5-10 where the normal kick is slightly exaggerated, almost like running in place.

Based on what athletes report, the next exercise may be the biggest key of this routine. On high knees, do a few sets of 5 to 10 seconds aiming to reduce ground contact time as much as possible. Make funny faces too, which is important for cheek mobility. Either all four cheeks are ready, or no cheek is ready. Your heart rate will elevate quickly, and many athletes have told us that their biomechanics start to click into place after this step.

Now, make sure the music is really flowing, because we’re already at the last step. 5-10 gentle leg swings forward-and-back and side-to-side work through the whole hip range of motion. Relax your body, and don’t aim for a Rockettes audition tape, just let the leg move without resistance. There’s a reason that millions of runners use Jay Johnson’s routine, so there is no need to remake the warm-up wheel.

Add a few little jogs and you should feel good to go! Do the Wake-Up Legs routine (or any other routine you like) before every single run for the rest of your life, adapting based on your physiology and response, and it could provide a security blanket against the worry of feeling tired or sore at the trailhead.

Just make sure you don’t ignore any persistent or abnormal fatigue or soreness, which could be a sign of a bigger problem that needs to be addressed by a health professional. For example, perhaps you need a better beat in your headphones. Appointments available with Dr. Dre.

Great post! It’s so important to find the best tips for trail running as it can be difficult. I always find good trail running shoes are useful too!