A quick exercise-band routine you can do each day to improve health and speed. 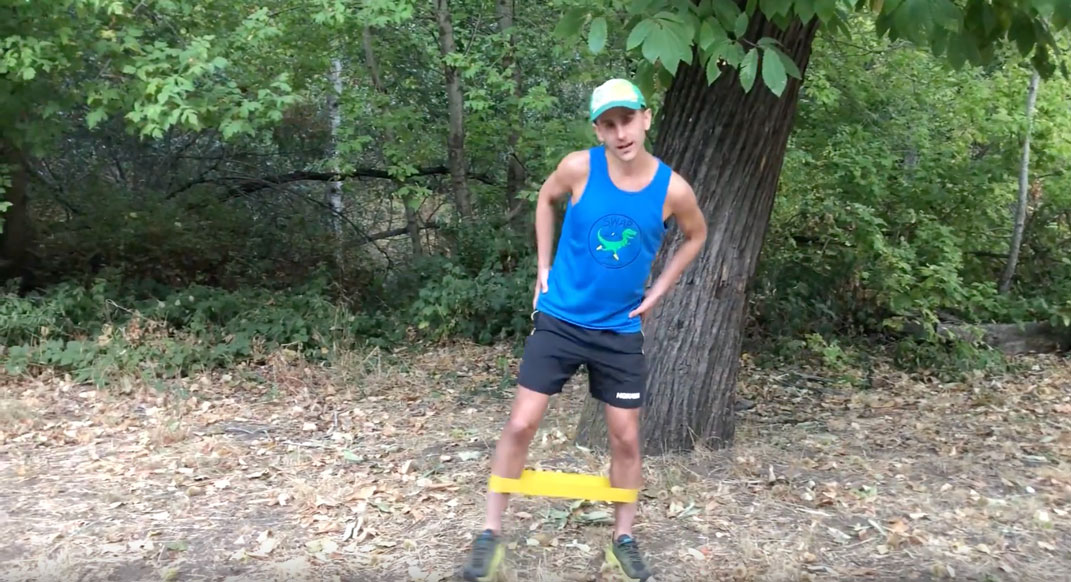 Seven years ago, in the middle of a race, my right hip suddenly lost power. I finished the race, thinking it was nothing.

Narrator: it was not nothing.

That night, I felt a persistent, pounding throb in my groin that meant one of two things: either I was a character in an overwritten romance novel, or I needed to see a doctor. The next week, the doctor reviewed an MRI of my right hip and gasped. The labrum was shredded. Much like romance novel abs.

On the eve of the surgery, I got cold feet and canceled. I doubled down on PT and over the next month, the hip improved. That year was my best running ever, with no hip pain at all. “The body,” a scholar once said, “is a wonderland.”

I have told this story before, so I’ll keep it short. The pain worsened, even with complete rest, and eventually I was scheduled for surgery. On the eve of the surgery, I got cold feet and canceled. I doubled down on PT and over the next month, the hip improved. That year was my best running ever, with no hip pain at all. “The body,” a scholar once said, “is a wonderland.”

Or maybe John Mayer said that. It has to be the PT, right?

There are too many variables to isolate, but the main PT work I did involved an exercise band. Over the course of the healing process, the exercise band routine got distilled down to just a couple of minutes. And then, because I’m the worst at this stuff, the routine fell away entirely after a couple years later. You could tell me the secret to everlasting life, and, if it involved strength work, I’d probably be too lazy to be consistent with it.

This summer, my hips started getting janky as crap again. I went to an amazing chiropractor, a wonderful massage therapist. I did lunges, I did squats. I ran in all different types of shoes. It took me months before I remembered the secret of the exercise band. Within a few weeks, I was feeling like Lizzo, “Good As Hell”.

Now that is an excessively long preamble, like one of those internet recipes that goes through a full Kerouac drug trip worth of words before telling you the ingredients to butternut squash soup. But I wanted you to have some background to give context to the two big disclaimers.

Two, working with a PT is always the best option. Do that. PTs have a wealth of expertise, and they even know what an adductor is.

I like athletes to do this routine before and after running, often with a lighter resistance band before for activation, and a medium band after for strength. It works the hip flexors, stabilizer muscles, high hamstrings, glutes and even the adductors. For me, I feel less sore and more springy after doing the routine consistently. But I am highly, highly susceptible to the placebo effect.

Combine with 3-minute mountain legs, some bodyweight work like push-ups and pull-ups, and some light stretching/rolling (if you’re into that sort of thing), and you have a routine that you can repeat consistently.

Side steps: 10 times in each direction, like you’re a big old crab.

Side steps with eversion: 10 times in direction, like you’re a big old crab crossed with a big old duck.

Monster walk: 20 steps, like you’re a monster with hemorrhoids.

Rearward walk: 10 steps, like you’re a monster with hemorrhoids inefficiently backing that thang up.

Optional hurdle drills: 5 in both directions.

Optional butt strength: 5-10 for both legs.

In my personal set-up for athletes, this is how it all fits together:

My warm-up routine for athletes

• Walk around to loosen up

My post-run routine for athletes

There are a million things you can do for strength and mobility, just make sure you’re not neglecting it altogether. This quick routine works for me and lots of athletes I coach with similar histories, but you can develop routines that are more complex or research-driven. Or even better, you can work with a professional PT.

Missy Elliott famously said that she don’t want no one-minute man. When it comes to exercise bands, I am two times better than that, so maybe that works.

Great article David. Im a PT and runner and do these band exercises-just a note that the stance leg benefits as much or more than the swing leg-the stance leg is asked to turn on all its stabilizers around the hip when the foot is on the ground.
Doing the exercise standing on one leg works on balance as well.

Thank you so much for this amazing comment Jon! I appreciate the feedback a ton, and I will clarify the article and video as well. YOU ARE WONDERFUL!

Great article David. Thanks man. You got me laughing.

Fantastic article, for both its practical and comedic value!

Okay, I am a hardliner on form and execution. This “coach” is completely out of form when doing the exercises. His upper body is leaning, his core is not engaged, he is not engaging the muscle groups each exercise is for during each rep. He is not spending time realigning his body in proper position after each rep. He is on uneven surface which makes what he is doing moot. These exercises are fine. Matter of fact, I do a couple as part of my warm-up to Sport Specific weight training. Although, if you are not in correct form, not engaging core and specific muscle(s), not using you breath, then it is all for nothing and you could get injured and develop/under develop muscles incorrectly. Upper body control and strength is just as important as lower body on the kinetic chain. This means you must have your entire body, from head to toe, in alignment and the appropriate muscle recruitment for each rep. Additionally, depending on the individual and their body type, needs, will depend where you place the band, which exercises you place emphasis on and how may reps you do.

Would you continue these exercises into a “taper” period ? I too am neglectful while things are going well until….. As a 58 yr old who prefers technical races like HURT, lately I am finding that I need to get into this program and stay there.
Thanks for your insight and the lightness of your videos

Thanks David, I have a couple questions. First, do you recommend doing every day? Second, as you build is it more important to increase range of motion or band resistance? Third, will I get over the fear that the band is going to break and snap me really hard in the leg? Haha.

Love this David. I also had Bi-lateral labral tears and was in agony. I was advised surgery but rehabbed myself and use bands regularly and lots of single leg bridging to help glute med strength. I’m back run/walking ultras.