A Fast Trail Race Might Not Require Much Speed At All

Improving your “minimum velocity” can make your performance skyrocket at longer races. 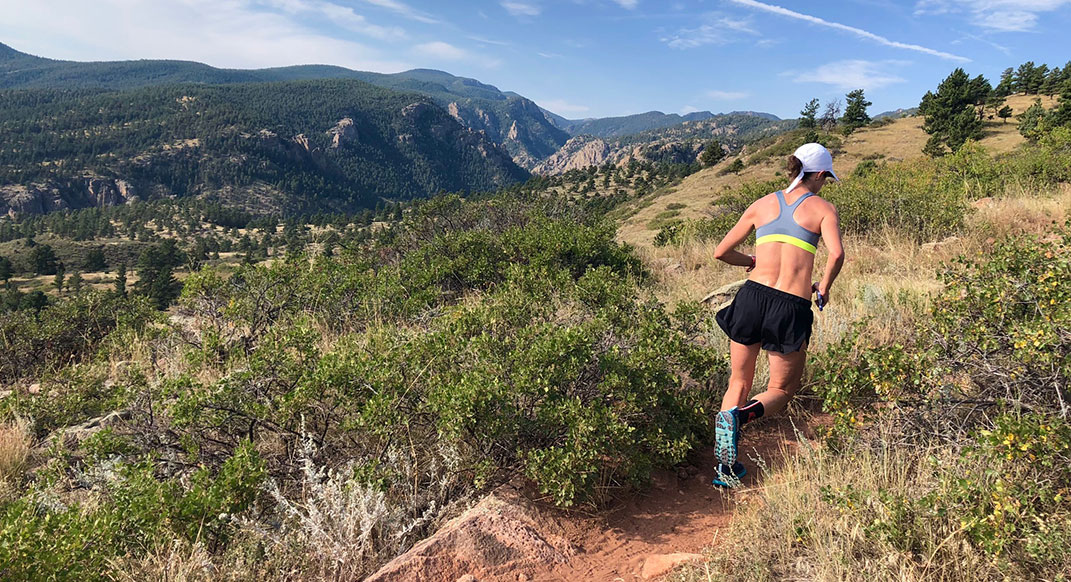 I recently recorded a podcast with Ian Sharman, Krissy Moehl and Shawn Bearden called Coaches’ Corner. It was enlightening—partially because they all have encyclopedic knowledge of training theory, and partially because it was a video recording that made it clear I really need to do something different with my hair. During the discussion, Coach Sharman discussed a topic that he says is a big part of his success: his slowest pace is faster than many of his competitors.

That resonated with me. If you imagine it said in Sharman’s delightful British accent, it might help add to the profundity.

To summarize the point, Sharman posited that ultramarathon performance depends largely on bottom-end speed, rather than top-end speed. Let’s call it “minimum velocity.” Whereas lots of training is designed to improve variables like VO2 max, critical velocity, lactate threshold and aerobic threshold, those define the ceiling of your performance. Minimum velocity defines the floor. And because the longer a race gets, the more the more likely you are to spend time near the floor—good minimum velocity can improve consistency in longer races.

Think of a 50-mile race. At mile 30, on a steep hill, all but a few runners will be hiking. Minimum velocity would be how fast an athlete will be hiking on tired legs.

At mile 42, on a fast descent, the same athlete might be tired and on the verge of bonking. Minimum velocity would be how efficiently the athlete can go downhill on shelled legs.

The differences can be massive. If one athlete improves minimum velocity so they can hike at 3.6 miles per hour instead of 2.8 miles per hour, that might add up to hours faster in long races. Even if their top-end let them run 6-minute pace for the first 30 miles instead of 6:40s, the quicker minimum velocity will lead to a stronger finish. Similarly, a 13-minute mile and an 11-minute mile on rolling terrain can be the difference between first place and middle of the pack.

For a top pro like Sharman, minimum velocity may only be really important in 100 milers or epic mountain races since his competitors are relying largely on top-end running economy otherwise. But for most of the rest of us, it could be important in any race that starts to push our endurance limits. For some, minimum velocity could matter in a 5K.

Imagine an athlete that trains their butt off and improves their velocity at lactate threshold from 10 minutes per mile to 9 minutes per mile. Metabolic efficiency improves, lactate clearance improves, circulatory factors improve, muscle fiber composition may change. They probably save 15 percent on their car insurance. It’s that good.

Minimum velocity isn’t anything new—almost all athletes and coaches think about it (I’m sure there’s a more technical name for it that I’m not finding). Ironman triathletes have been known to train a ton of miles at an easy/moderate pace that they can lock into after 112 miles on the bike. Road marathoners will practice glycogen-depleted runs to essentially try to make their aerobic threshold align with their minimum racing velocity, leading to more sustainable pacing in the 2nd half of their races. Most trail runners doing longer races should include a similar emphasis in their training, especially in the month or so before an event. What might that look like?

The ceiling and the floor are not independent variables. Let’s think about why that is.

First, your minimum velocity has little bearing on your top-end speed. Getting really good at going really slowly (like you will in a 100 miler) does not make you better at going fast unless you are severely aerobically limited, in which case almost any aerobic training will help.

But your top-end speed will usually raise your floor with a little bit of specific preparation. Imagine an athlete that trains their butt off and improves their velocity at lactate threshold from 10 minutes per mile to 9 minutes per mile. What actually happens inside that athlete’s physiology? The answer is long and complicated, but probably includes improvement of just about every variable that matters for endurance performance, even if the threshold number itself isn’t that important, as outlined in this 2009 article in the journal Sports Medicine.

All of those top-end improvements will probably be associated with slower paces feeling easier too, as long as the athlete does enough specific training to let them use the improvements (though it’s complicated, as discussed in this 2012 article in the Journal of Applied Physiology). In practice, that means that most athletes should be doing speed work all season long outside of any phases focused primarily on specificity for their goal event. That can include strides, intervals, tempos, races to the grocery store to buy ice cream to fuel the speed—for most athletes looking to improve, almost all balanced training is good training.

A mistake some athletes make is understanding the minimum velocity principle, and proceeding to ride it into the ground. They get so good at slogging that they never get the ability to go faster, and as a result their slogging eventually slows down, too. On the big day, you might be dancing with your minimum velocity, but the only way to get into the club in the first place is by improving your top-end speed.

Hiking is a skill that takes practice

Most trail runners hike in races based on terrain. And it’s not an intuitive skill—it’s something that takes work.

View every time you hike on training runs as an opportunity to practice urgency. If you don’t have to hike much on your training runs, consider using a treadmill.

I’ve told this story before (I am venturing into wacky grandpa territory with re-telling stories), but I learned this lesson at the World Mountain Champs in 2014. In a race that was just 10K, I got passed by the entire Italian team as they hiked up the hill. Meanwhile, I was pumping my arms and running like Tom Cruise in Mission Impossible. At the time, I couldn’t have hiked that fast if I was given a million dollars.

Here’s the really cool part—a well-developed hiking skill can be used without too much fatigue no matter how long the race. Sharman explained that even when tired, he knows he can hike fast due to the reduced impact and power required. Minimum velocity improves as hiking efficiency improves.

The most important element in developing your hiking skill is using good form. Lean forward, keep your center of gravity forward, bend your knees, use your butt. That sounds like a new dance that is taking the clubs by storm, but it’s good for the trails, too. Then, view every time you hike on training runs as an opportunity to practice urgency. If you don’t have to hike much on your training runs, consider using a treadmill. I will have some of the pro athletes I coach do treadhike intervals, often 15 percent grade at 3-4 miles per hour for 20 to 40 minutes at a time, working up to 4.5 or even 5 miles per hour in some instances. When that fast hike becomes second nature, minimum velocity skyrockets.

Downhills are free speed if you are prepared for them

Going downhill, your heart rate will be lower due to the reduced concentric power output required. In longer races, your top-end aerobic variables might not be touched at all, with your biomechanical resilience (mixed with some running economy) taking center stage due to the increased impact forces and eccentric force absorption, as outlined in this 2005 article in the Journal of Biomechanics. If your body is not mechanically prepared to run the downhills efficiently, you’ll find yourself beset by Jello Legs. Most of us know the feeling—turning to run back uphill and finding out…”crap, my legs are mushy loads of gelatinous uselessness.”

That’s when minimum velocity plummets. The key is to avoid breakdown on downhills so you can keep running instead of jogging or limping or lying down on the side of the trail and wishing for the sweet release of a rattlesnake bite (BEEN THERE).

This one is simple to prevent, though. Run down steep hills in training as fast or faster than you will on race day. I ask most of my athletes to run every downhill in their long runs with purposeful flow, sometimes adding downhill workouts once every four to six weeks. You can work downhill resilience even if you live somewhere flat, raising minimum velocity with it.

Cross-training and strength training are beneficial

To raise minimum velocity, it’s key to avoid breakdown anywhere along the biomechanical chain. If your core is unstable, your form may deteriorate, contributing to a hip injury. If your quads lack strength and endurance, even a low-level effort may become impossible after a few hours. Cross-training and strength training help prevent breakdown during the race and injury before it, and studies indicate they improve performance, too (as long as they’re not at the expense of your running).

There’s no magic to any specific activities, just make sure you are doing some leg strength work (like this 5-minute routine). And don’t shy away from activities like hiking, biking and the elliptical if you enjoy them. Heck, Rob Krar just won the Leadville 100 off of weeks of serious bike training. It’s not essential, but it can make all the difference for some athletes, especially those that are limited in how much they can run without injury or burnout.

On top of all that, just apply normal training methodology that you hear me drone on about each week, doing enough long runs over terrain like the race to be prepared for the specific demands of race day. Minimum velocity isn’t sexy. It’s actually kinda boring. But when thinking of your training and racing, remember the age-old fable: there’s a reason that the race is won by the boring, not-sexy-at-all tortoise.

Great article. At 80, I practice walking uphill and running down. Like the way I feel.